Dope Floats, AFS revamps its publication, and the Alamo Drafthouse keeps on getting cooler and cooler. 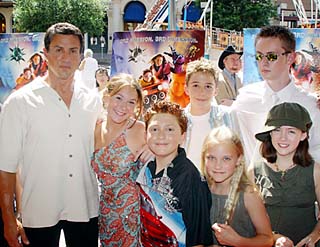 The cast of Spy Kids 3-D: Game Over gathered at downtown's historic Paramount Theatre on Sunday, July 13, to celebrate the world premiere of the franchise's third outing. Sylvester Stallone (l) -- who plays the film's big baddie, the Toymaker -- almost cracks a smile here in front of the Congress Avenue carnival with the young cast, including the series' stars Alexa Vega (second from left) and Daryl Sabara (third from left). (Photo By Gary Miller)

Dope Floats Dept.: Or should that be Smokeless in Seattle? Contact High? God-awful puns aside, as we were going to press last week, word came over the transom that producer extraordinaire and sometime Fredericksburg resident Lynda Obst had pulled a Willie and was busted on Sunday, July 6, by Austin-Bergstrom International Airport police when a random check of her bags at the preboarding area turned up "less than an ounce" of marijuana, according to press reports. Obst ended up spending some six hours in the Austin Police Department's new central booking facility before being released -- no comment was forthcoming on the APD's balogna-and-Kool-Aid cuisine, but Obst, one of the most respected producers in Hollywood, hired attorney Joseph Turner to represent her in the pending case. As of press time, Turner had no comment on his client or her situation... The revamped and revitalized Austin Film Society mag P.o.V. that we mentioned here a couple weeks back has finally hit the streets, and if you're looking for a great picture of a brooding Ray Milland soaking up hootch (and who isn't?), then this is the place to do it. New Editor at Large Paul Alvarado-Dykstra and design guru Marc English have knocked this one out of the proverbial park -- it's available around town at various video outlets, coffee shops, and wherever film geeks tend to congregate. Check it out... The Alamo Drafthouse Downtown (409 Colorado St.) and its progeny have a wealth of mind-bendingly cool programming and special events in the next few weeks, including their Smokey and the Bandit Road Rally-cum-scavenger hunt, slated for Saturday, July 26. With 400 cases of Coors beer, the aforementioned Burt 'n' Sally classic, and "prizes galore" included in the bargain, you really need to get off your duff and get that damn intercooler fixed up already. Then, on Saturday, Aug. 9, the Alamo will be holding their very own Ultimate Summer Camp Experience with an all-night summer-camp horror marathon featuring the world premiere of Jason Vs. Freddy (Ken Kirzinger and Robert Englund in person, to boot), possibly the coolest event owners Tim and Karrie League have ever concocted. Info and more at www.drafthouse.com... According to trade reports, Quentin Tarantino's upcoming film Kill Bill will be released in two parts after all (with the first installment premiering Oct. 10, the second six months later) -- this after much speculation and disavowals on the parts of Miramax, QT, and other sources earlier this year. It'll be the first time this has happened to a major Hollywood film since Joseph Mankiewicz's Cleopatra in 1963. More on this at www.aintitcoolnews.com... Finally, congratulations are in order for Elizabeth Avellán and Robert Rodriguez, who announced the impending arrival of Spy Kid Numero 4 (in addition to Rocket, Racer, and Rebel Rodriguez) at this past Sunday's premiere of Spy Kids 3-D: Game Over, which, of course, sent us running to the "R" section of our American Heritage Dictionary: Radical? Hi-Res? Revolution? (Or maybe, on the Obst tip, Reefer!) Inquiring minds want to know.