The halcyon days of film programming at the University of Texas

The movie screens still stand, but the projectors have gone dark. Where once it was possible for students at the University of Texas to see several films a night on campus, opportunities are now reduced to occasional screenings and special events. Back then, traipsing across campus from the Texas Union Theatre to Jester Auditorium and then Batts, with maybe a stop at the Varsity Theatre repertory house on the Drag (where Tower Records now stands) one could travel from Paris to the Old West to czarist Russia or Brazil. Every night. The screens in the Dobie Mall were also new and showing current releases, and catty-corner to the mall was the Texas Theater porn house on the Drag (where the Eckerd now resides). The time was the Seventies, and this glorious state of film affairs continued in diminishing permutations into the Eighties. Now those flickers of light are as faded in memory as the mural figures on the Varsity Theatre/Tower Records wall.

Back then, two campus film organizations -- the Texas Union Film program and CinemaTexas -- showed rotating schedules of movies throughout the week. Their programming reflected a common belief in film literacy as a basic component of a liberal-arts education, although both programs were open to the general public as well as the student population.

The films shown in the Texas Union Theatre were programmed by a volunteer student-activities committee and administered by longtime Union staff member Steve Bearden. Over the years the participatory mix would sometimes shift, but the Union's film program could always be counted on to bring to Austin the best of the new European and world cinemas and cutting-edge American releases. It was here people came to see the new films by Godard and Fassbinder, films that were screening nowhere else in Austin -- or perhaps even Texas. The program offered films from the Australian new wave, Africa, Asia, and South America, as well as the latest movies by American directors such as Robert Altman and John Cassavetes and film classics by cinema stalwarts like Alfred Hitchcock and Frank Capra. Movies would generally rotate every couple of days and, at its Seventies peak, it would be possible to see six to 12 movies a week courtesy of the Texas Union Film Program alone. (One of its student-committee graduates, Michael Barker, works to this day in exhibition as the hands-on co-president of Sony Pictures Classics -- one of the country's premier distributors of such specialized films as Crumb, Sunshine State, and Winged Migration.) 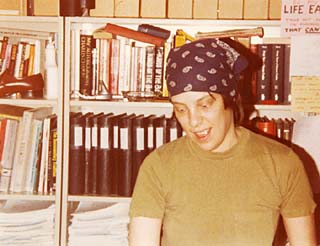 Chronicle Senior Film Editor Marjorie Baumgarten as a young pup in the old CinemaTexas office, circa 1980. There, students prepared the program notes (below) for each screening. (Photo By Martin Chait)

The other major film outlet at the time, CinemaTexas, was the exhibition arm of the university's Radio-Television-Film Department. Formed in the early Seventies, CinemaTexas was a graduate-student-run outfit that serviced the programming needs of the department's film history and theory classes, as well as the educational needs of the participating grad students. Films screened four nights a week in Jester Auditorium and were programmed as complementary labwork for the courses and seminars being taught each semester. CinemaTexas also handled the film bookings and shipping, tended the nightly box office and accounting, and produced and wrote in-depth Program Notes to accompany every film. By the early Eighties, CinemaTexas faded away, but not into oblivion. The department retained the name, and CinemaTexas emerged in the mid-Nineties in a reconfigured form: the CinemaTexas International Short Film Festival, held annually in September.

Many other Chronicle contributors over the years have also had ties to CinemaTexas. A great number of others have pursued careers in teaching and are now distinguished faculty members at universities as far-flung as Hong Kong, London, Iowa, and Harvard. One alumnus, Charles Ramírez Berg, returned to the University of Texas where he continues to teach film studies and remains a popular faculty member. (Ramírez Berg also serves as the current president of the board of directors of the Austin Film Society, an organization that came into being during the mid-Eighties after the shuttering of CinemaTexas.)

The CinemaTexas offices were located in Walter Webb Hall, in separate offices across the street from the RTF Department, and it was here that my real film education occurred. Flanked by hideous black-and-white striped wallpaper that was covered over with posters, pictures, and cabinets full of old Program Notes and reams of blank paper, the CinemaTexas offices were home to a decade's worth of graduate students, who were kept grounded by the sole university staff employee, the good-natured and ever-indulgent Pamela Peters. Two IBM Selectrics and a mimeograph machine produced a new set of Program Notes every Monday through Thursday, while future programs were simultaneously planned and the clerical chores of shipping film prints, daily box-office accounting, and building ads for The Daily Texan hummed along to the sounds of the noisy machinery cranking out their daily product.

People often tell me that I have the best of all possible jobs: film critic for The Austin Chronicle. And they're not far off the mark. In truth, however, I have to say that my work-study employment at CinemaTexas was really the best job I ever had. By midafternoon I'd come by and grab that day's Program Notes as they were freshly pulled from Peters' typewriter (assuming the Notes were turned in on time by that day's notewriter and editor, and the length of the notes were of average verbosity). I'd take them to the room across the hall (aka the production office and screening room), make mimeograph masters for the six- to 10-page Notes, and then load up the machine (a finicky and antiquated apparatus even by the prevailing standards of the day). There was one more thing I would do before starting up the clamor of the mimeograph machine: thread the projector with one of the half-dozen or so movies that were passing through the office at any particular moment. After threading the projector, I would crank up the sound to the max, close the curtains, and shut off the lights. I'd turn on the projector, focus the image (which was projected onto the opposite white wall), and then return to the mimeograph machine, which I learned to operate in the semidark. The din of the competing machines made the room no place for somebody with a headache to work, but in all other respects the job was heaven. Talk about whistling while you worked.

The tedious part of the job was schlepping across campus to the post office with the heavy cans of film for return shipping. But in the evenings, I would gather up the now-printed and manually collated and stapled Program Notes, along with a metal cash box stocked with a few dollars and rolls of quarters, and head for the box office where we would be showing the film that I had most likely watched on the wall that afternoon. Two shows a night. The experience of working the box office is practically a story in itself, but suffice to say that it was great fun to chat with the patrons, projectionists, and other students and either watch the movie again or do some homework in between the shows.

Perhaps the most valuable tool in my film education also resided at the CinemaTexas office: an old Steenbeck editing table. Here, in the days before the widespread advent of home video, it was possible to take the 16 mm films and slap them on the Steenbeck for analysis. The editing table had the equivalent of freeze frames, slo mo, and simple reverse direction. We could study the mechanics of how various cuts were made, copy down quotes accurately, and replay a scene as many times as we liked. It was an invaluable experience and the best method I've ever found for discovering how movies actually work. To this day, because of the Steenbeck, from which we would copy down and print all the credits that appeared on the film reels, the CinemaTexas Program Notes contain some of the most complete film credits I have seen anywhere. Those collected Program Notes, bound with heavy-duty staples, are still cataloged in research libraries around the world. Twenty years later, it's not unusual for a former notewriter to be contacted out of the blue by someone with an inquiry about additional research questions or wishes to request reprint rights.

But the real education acquired during my time at CinemaTexas was the camaraderie of others who were watching the same several movies a day that I was and then sitting around the office passionately discussing everything they had seen -- or longed to see. Regularly, we'd watch the sun go down over the rooftop of the office and then carry on the conversations as we raced across campus to catch our next screening. As each of us developed our unique areas of expertise, we'd share those with one another, too. Watching videotapes or DVDs by oneself or with a few friends is not the same thing -- although a really good DVD commentary track can often approximate the experience.

What's gone from the UT film experience these days is the sense of movies and their understanding as a vital and necessary element in a well-rounded education. Scrapped for lack of serious profit-making potential, the university's concerted film exhibition programs were sacrificed for the greater economic good. Despite vocal student protests in the winter of 1997 against the closing of the Texas Union film series, Union officials determined these screenings ought not exist without turning a profit -- even though profit-making was never the program's overriding mandate, especially when considering the number of Union filmgoers who might stick around in the building for dinner or a drink. It might be good to remember the chants shouted by student protesters at the rallies dubbed the Texas Union Massacre: "We want Godard, not corporate lard."

See you at the movies.