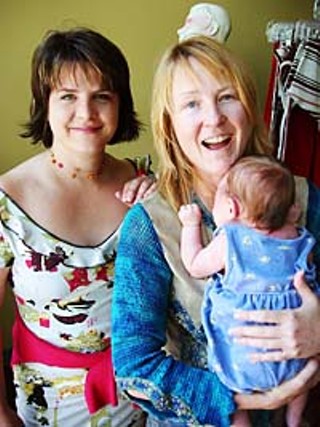 Kari Perkins and Meredith Moseley's fledgling costuming company has already suited up actors from productions including The Alamo and Spy Kids 2: The Island of Lost Dreams. (Photo By Todd V. Wolfson)

It may not be the best slogan in town, but you've got to admit it's unique: "Star Costume and Clothier: They Made Leatherface Fat."

OK, so maybe that's not what co-owners Kari Perkins and Meredith Moseley want on their business cards, but I took a ground-level advertising class once, and trust me, it's not one anybody's likely to forget anytime soon. Of course, it's also not one that's likely to attract the attention of Hollywood costume designers from the ranks of Disney, but with Perkins and Moseley's recent high-profile work on Marcus Nispel's new The Texas Chainsaw Massacre and John Lee Hancock's updated The Alamo, a Disney outing currently wrapping up second-unit work outside Bastrop, it appears that the duo's relatively new costume and design company can pretty much put whatever they want on their résumé.

Since the company's formation in 2000 -- they met when both were working on the set of the less-than-stellar Western American Outlaws -- they've provided garments and props for numerous films and nearly 40 Austin-based stage plays. They created a pair of mascots for Robert Rodriguez's Troublemaker Studios as well as the "magnet men" outfits on his Spy Kids 2: The Island of Lost Dreams, did custom-fitting work on Alan Parker's The Life of David Gale, and made custom shirts for Dennis Quaid's character in Hancock's The Rookie. Working in a subset of the film industry that most audiences barely know exists, much less appreciate, Perkins and Moseley have carved out a niche in the burgeoning Austin film and theatre market and gained a reputation for creative, challenging designs and lightning-quick turnarounds, not to mention the ability (and willingness) to patch up other, Los Angeles-based costumers' mistakes.

Housed in a nondescript albeit recently remodeled warehouse adjoining a suburban neighborhood in East Austin, Star is unique in its ability to work with a film's or a play's costume designer (on-set, if need be) and turn out dozens of pieces ranging from the hallmark black-zig-zag-on-a-yellow-field for You're a Good Man, Charlie Brown to scads of frilly, aesthetically complex buccaneering outfits for The Pirates of Penzance and pretty much everything in between (including costumes for the pilot of Rick Linklater's upcoming HBO series).

Austin's film and theatre community, of course, is no stranger to the craft of costume design -- SoCo's Lucy in Disguise is as venerable a performing-arts costuming outfit as you're likely to come across -- but it's readily apparent after only a brief glance inside the Star offices that what Perkins and Moseley have created is something totally unlike what other Austin costumers offer.

Stepping inside their already-cramped 2,000-square-foot offices and workrooms is akin to wandering backstage at the Metropolitan Opera, minus the scowling security guards. Five regular employees and a dozen interns are hunched over various pieces of work in varying degrees of completion, threading needles, manning sewing stations, cutting, gluing, rendering sketches of as-yet-unborn articles of clothing for who knows what. Seemingly endless racks hold old and new groupings of costumes in every possible combination, each one unique and functional. It's like an anti-sweatshop, a place with a creative vibe that positively dangles in the air like the scent of greasepaint and fresh art. A nice place to work, but I wouldn't want to live there (too many endearingly bizarre fat suits -- for an out-of-state play -- hanging around for one thing). The whole affair smacks of kidhood playtime, and that, according to Perkins, is how her love for costuming and clothing design began.

"When I was little, my godfather designed for the Follies in New Orleans, and when I would visit him in the summer, he'd always take me into the costume stock and let me play with these huge headdresses and really elaborate costumes. I'd just sit there and play with all these outfits for hours and hours. I knew even back then that this was something I wanted to be involved in."

Of all the aspects of the filmmaking process, costume design, especially in films that don't require period pieces or four-on-the-floor creations that attack the eye, may be the least appreciated by the public at large. Who, after all, remembers the various outfits actors sport as daily, "real-world" characters? The trick is to find a specific character's sartorial tic and run with it -- without running it into the ground.

"Different projects we've done," says Perkins, "obviously have different requirements. I've done a number of projects with Rick Linklater, and over the years we've developed a real harmonious working relationship. At this point I know what I can do and how far I can go. I have a tendency to try and push things to the extreme and them pull it back a bit, but with Rick it's very much a case of 'Do what you want to,' which is what every costumer likes to hear. He allows me to be as creatively playful as I want to be. He trusts me.

"You read the script, you look at the different characters in it and their relationships with each other, and then you approach the costuming either very stereotypically, by saying, 'This person is a banker, he's going to wear a three-piece suit,' or by finding a quirk that might set that banker apart from the norm -- maybe he wears white socks or no socks or whatever. And that has to speak to the character at hand, to work within the film."

The process of costuming an actor, for both the camera and the stage, begins with the production's costume designer, who works with the director and the art department to create sketches and renderings of what the characters will wear. Those are then sent to the costume department, or in this case, to Perkins and Moseley, where fabrics are chosen, dyes are added when necessary, and the various pieces are stitched together and finalized before sending them back to the set. Star Costume, unique among Austin costumers, does virtually everything in-house; with the exception of regular buying trips to Los Angeles, a frequent source of some of the company's more outré raw materials, most of the work is done in Austin. Thrift-sailing is understandably key.

"As far as picking out what the clothes should look like, that's the designer's job," notes Moseley. "On The Alamo, for instance, we had it pretty easy because they were able to hand us a rendering of the clothing and tell us how many they wanted. From there, when we find out exactly what they want, we pattern it, we prewash the fabric if it needs to be or dye it, and then we make it."

"I'm always watching other people," says Perkins, "and trying to see the nuances between them. What are they wearing and how are they wearing it? What are they doing? And then we take those real-world experiences and weave them into the costumes and garments we do for the world of film and theatre."

And then there are the research books they draw upon for historical accuracy, "millions and millions" of them according to Moseley, and while there may be a bit of hyperbole to the figure, the stacks of reference volumes on hand attest to the duo's ability to fashion the right piece of clothing for the right time period. Their work on The Alamo, which included a number of costumes for Dennis Quaid and other principal cast members, is spot-on and nicely draws the eye away from all those massive muttonchops.

Speaking of The Alamo, Moseley recalls "a minor disaster ... when a shipment of about eight Mexican flags arrived from Los Angeles with water damage. It looked like someone had laid something wet down on them, and the colors had bled through from one flag to the next. They called us up and said they needed these flags for a sequence that was going to be shot two days later, so we ended up ripping these smeary flags apart while I stood in front of the washing machine for three hours trying desperately to get the flags back to the way they should be. We ended up having our stitchers come back later that day and work frantically repairing the flags until midnight, after which I rushed them back to the set by 6 o'clock the next morning. We've done a lot of emergency work like that, and that's not something that every costumer would probably do."

Ultimately, Perkins and Moseley's all-in-one costume company may represent a whole new breed of dramatic clothier, one where every step of the costuming and design process is done under a single umbrella group instead of having the various aspects farmed out to individual groups. It's a unique idea, and one that appears to be taking off -- between film, theatre, the occasional television spot, and, oh yeah, their nascent bridal-gown biz -- the pair have created something of a minirevolution in how Austin film and theatre productions go about outfitting their casts.

Perkins: "People ask what we do, and we both just kind of laugh when that happens because we do everything. We've done props for films; we've done puppets; at one point we did a RoboCop stripper costume. ... Anything that anybody can imagine we can do or have done or will do at some point. We do it all."