Get Your Warblog On

As conventional media stumble, the web's armchair war reporters rise to the occasion, to questionable effect 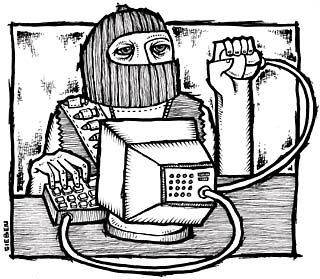 Salam Pax, in case you hadn't heard, is back. The moniker, at once witty and cutting, of a Baghdad blogger who has for months now been carrying on a mordant and witty dialogue with the world at large on the ongoing (and increasingly surreal) subject of life during wartime, has been the subject of rampant speculation from media both above ground (CNN, Fox News) and below (pretty much every other blog out there). Is he who he says he is? Is he really in Baghdad? Is he real at all or just the crafty figment of someone with too much time on his hands and a working knowledge of the intricacies of the Iraqi capital city? So far none of these questions has been answered with any sort of finality, but Pax's sudden reappearance online after a lengthy absence during which many in the "blogosphere" assumed he might well be buried under several tons of rubble, made news all over the place. His is by far the most famous warblog going.

Blogs, shorthand for "Web logs," are a fairly recent development in the Webby community -- simple online journals that anyone can create and contribute to, often heavy on linkage to "legitimate" news sources and to other blogs. They are the electronic equivalent of mash notes sent over the Net to the world at large, frequently covering the same sort of mundane topics you find on sites like Livejournal.com: "My cat Muffin got declawed this afternoon"; "My drapes are so happy they're dancing around the living room," etc. (See Jon Lebkowsky's "A Corner in Cyberspace Turned Blog Party" article for more background: austinchronicle.com/issues/dispatch/ 2003-02-28/screens_feature2.html.)

With the geopolitical mayhem of the last year or so, though, a new kind of blog has morphed into being: the "warblog." As you've probably already guessed, the warblog aims its sights down the barrel of the United States' conflict with Iraq and all things cordite-scented. The birth of the warblog as a firecracker cultural barometer came quick on the heels of 9/11; along with everything else, the attacks politicized the Web in ways that are only slowly being comprehended. It's sort of like tossing a toaster in a bathtub -- everything gets jittery for a while and reeks to high heaven; it's only later that you realize you're looking at things from a whole new perspective, bleak though it may be.

Pax's site (www.dear_raed.blogspot.com) went silent in late March as coalition forces moved into Iraq. Previous to that point, Pax's postings ran heavy on wartime irony in an Altman-esque flurry of descriptive writings that captured the eerie flavor of the prewar ramp-up, more M*A*S*H note than mash note: "In the 'oh-the-irony-of-it-all' section of my life I can add the unbelievable bad luck that when I wanted to watch a movie because I got sick of all the news, the only movie I had which I have not seen 100 times is The American President. No joke. A friend gave [me] that video months ago, I never watched it. I did last night. The American 'presidential palace' looks quite good. But Michael Douglas is a sad ass president."

Now, back online, Pax recently compared the post-dustup Baghdad to a William Gibson novel --"Heaps of cheap RAM (stolen of course) is being sold beside broken monitors beside falafel stands" -- and offers insights into a Pax-eye-view of the new "liberated" Iraq. It's required reading for those interested in the day-to-day realities of regime change, but it's also only the very tip of an iceberg that has emerged as our American president has gone Code Bellicose.

Austin's blog scene is sprawling these days -- the city's techie boom fueled the initial wave of blogs to a large degree, and while there are few outright warblogs going in the capital city (you're more likely to find the usual blogs with spare commentary on the war that bleeds in from the collective psyche), it's not unheard of.

But David Nunez, webmaster for Austinbloggers.org, a loose confederation/ listing of local blogs, says the warblog phenomenon is much ado about nada: "The signal to noise ratio is especially high in warblogs. Just because blogging brings the power of simple online publishing to everyone doesn't necessarily imply that everyone knows how to wield it effectively.

"So people, the majority of [whom] haven't bothered to do any real research, end up ranting over emotional issues, like war, and linking to each other's rants, pompously [assuming] that their opinions are the truth. I've found that we get the pyramid-scheme effect among bloggers: A few A-listers happily generate the poorly researched, uninformed, and even ridiculous thoughts, and the hordes of bloggers willingly drive enormous traffic flow to those sites, often chiming in with their own, even-less-valuable opinions. Bah."

That's the democratizing effect of the Web in action, though; when everybody suddenly has a voice, they tend to shout, and they're not always (or even often) intelligible.

Not all warblogs are anti-war, although a cursory Google search turns up more anti- than pro-warblogs. John Little runs Blogsofwar.com, a pro- (or at least not anti-) warblog that was, as Little says, "deployed in October of last year." Like its online antitheses, Blogs of War provides daily links to war-related stories but is couched in a decidedly conservative viewpoint. It's but one of many right-leaning warblogs, and despite the ongoing public perception that most warblogs are lefty home bases, Little says that reaction to his site has been overwhelmingly positive: "I've received letters from a doctor who described wounded marines huddling around a PC to read Blogs of War, high-ranking members of the military have written to thank me for providing this service, family members of deployed soldiers have written extremely touching letters. ... The entire experience has been unexpectedly rewarding."

One Austin-based site that actually seems to have accomplished something from proto-warblogging is Austin.Indymedia.org, one of a large umbrella group of Web sites (Indymedia.org) that focus on local, grassroots, down-and-dirty political reporting. IndyMedia formed in the wake of the November 2000 WTO protests in Seattle and has since spread to virtually every major city in the world, with loosely knit offices and outlets from Austin to Adelaide, from Beirut to Chiapas, and beyond. While not officially blogs, IndyMedia sites nonetheless conform to the blogging ideal, offering anyone who cares to participate a chance to report on various pro-war and anti-war demonstrations, anti-globalization marches, and similar civil events wherever they occur. It's the end result of the politicization of blogging.

IndyMedia organizer Michael Gomez says, "It's true we're not a blog per se, but IndyMedia is very bloglike. People that I've spoken with -- whether they contribute to the site or not -- say it has given them a sense that their voice can be heard, that they're a part of something bigger than themselves, and that their point of view is shared by others. That's our biggest thing: getting people to realize that they're not alone in this distrust of traditional media sources."

The communal, cooperative nature of IndyMedia makes it one of the best alternatives to the mainstream press going these days, particularly during the politically combustible ramp-up to the war in Iraq. And people are reading it. One of those people is Austin futurist and science-fiction author Bruce Sterling.

"Let's face it," says Sterling. "IndyMedia is not really very 'indy.' IndyMedia is at least as ideologically driven as, say, Fox News Network. There's a very clear party line in IndyMedia. IndyMedia likes to call itself IndyMedia, but it's really LeftyMedia. I'm not disparaging them for that, because they have sort of achieved something rather interesting there, and I quite enjoy reading IndyMedia, but I always, you know, read it with a boulder of salt."

More than most, Sterling (who has his own blog at www.infinitematrix.net/columns/sterling) has been keeping an eye on blogging in "the People's Republic of Travis County." As to the sort of impact warblogs have had on the world at large, it's unrealistic to think that the anti-war bloggers could effect a change in real-world politics. Just because they have a voice and are free (so far) to say what they choose doesn't mean anybody's listening to them.

"The truth is always the first casualty of war," says Sterling, "and rumors of war flourish during wartime -- people are very stressed out -- and so warblogs are kind of a mechanized, cybernetic version of rumormongering. One thing that I find surprising is that there is not more on-the-ground reportage of the Salam Pax variety, other than IndyMedia. Most warblogs are some self-appointed pundit listing various commentary by professional journalists and then commenting on that or speculating on what's really going on in the corridors of power. There's not very much in the way of war diaries or eyewitness accounts or the kind of spontaneous, street-level stuff. And there don't seem to be any soldiers with really good warblogs. But that might change with the next war. And I think there's going to be another war before too long."

Ultimately, warblogs are a reaction to an increasingly corporatized national media that seems to be towing the government's party line without offering the hard, wartime news that the old guard like CBS and Walter Cronkite brought into the American living room during the Vietnam War.