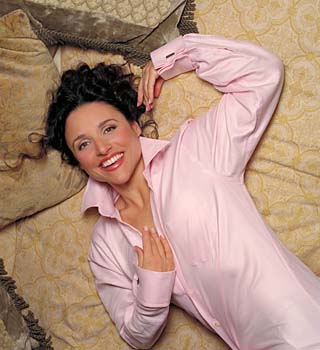 Resurrected from the graveyard of underwatched sitcoms, Watching Ellie has been largely reworked, but it still stars Julia Louis-Dreyfus as a marginally successful cabaret singer.

Two anti-heroes hit the small screen last week. The first is Julia Louis-Dreyfus' Ellie Riggs in the retooled Watching Ellie; the second is John Corbett's Michael 'Lucky' Linkletter in the new FX series, Lucky (not on USA, as I wrote last week). Ellie Riggs is a struggling jazz singer in Los Angeles. Lucky Linkletter struggles with his gambling problem in Las Vegas. Ellie has an ongoing affair with a married man. Lucky is somehow responsible for his wife's death, yet couldn't even pay for her funeral. Ellie surrounds herself with men who are no good for her. Lucky pals with casino alley cats who are good-natured, but driven by their desire to gamble. Still, with all Ellie's and Lucky's foibles, they are likeable, though, when one steps back to think about it, maybe they shouldn't be.

As one of the most talented women to come out of TV, Julia Louis-Dreyfus should have had her pick of projects after Seinfeld. That she chose to play the part of a marginally successful singer with a poor choice of men was a bold decision. How many characters (except maybe in the hyperfantasy world of soaps) are forgiven for being the other woman? There's no pretense to a love greater than Ellie or her lover Ben (Darren Boyd). No, she wanted him, he wanted her, and that was that -- with all the consequences that come along with it.

Watching Ellie premiered last spring with 10 episodes. Reviews were mixed (I loved it). It was filmed with a single camera in real time, which made the pathos of the show even more pronounced. This time around, it is filmed in the traditional sitcom format with multiple cameras and a live studio audience -- though the laughter sounds annoyingly sweetened with a laugh track. Frankly, I liked the former version better. Although her choice in men was stupid, stupid, stupid, Ellie Riggs was sympathetic in her inability to throw people (men) away. This was poignantly clear in an episode where, after a series of slapsticky incidents, Ellie and her former boyfriend Edgar (hilariously played by Steve Carell) found themselves in the dressing room of a dance studio, with Edgar nursing a broken nose. It was an absurdly goofy moment when Edgar lamented their breakup, pleading through his bloody, mangled nose for Ellie to come back to him. Yes, even the most sensible breakup does not come without a little gore.

That Ellie Riggs is a marginally successful singer is refreshing (and painfully realistic). She gets by with small gigs and even resorts to singing in the subway to get her car out of the shop. There's no showbiz glamour, just the workaday troubles of a woman who's still looking for her big break in her 30s. And unlike the starry-eyed pretense of talent shows like American Idol or Star Search, Ellie Riggs personifies the real, working-in-the-trenches artist who may or may not be all that talented and may or may not get a break -- just like in real life. If this isn't fodder for comedy, I don't know what is.

Has there ever been a series in which a character and his addictive personality were the centerpiece of a series? Lucky may be the first. And with only one episode out of the gate, Lucky appears to be another hit for FX, which scored well with The Shield. Unlike Ellie Riggs, who seems to thrive on the wackiness of those around her, Lucky is a loner. He's surrounded by a memorable cast of characters -- tops among them being Dan Hedaya as the seedy Joey Legs -- but when it comes right down to it, he's his own best friend and worst enemy. We know this by his occasional pep talks into the camera. Well acted, marvelously cast, and teetering on the line between comedy and drama, I can't wait to see how -- or if -- Corbett's Lucky adds to the small pantheon of flawed characters we can't help but root for, even if loving them is a little difficult.

Fans of the recently canceled ABC series Miracles have started a grassroots campaign to save the show. For more information go to http://pub11.ezboard.com/bmiraclesmessageboard.

Speaking of shows canceled before their time, an online petition to get the former Freaks and Geeks issued on DVD awaits your electronic signature at www.freaksandgeeks.com/dvd.

And finally ... the end is near for Buffy the Vampire Slayer. Though details are not set, Henri Mazza, the PR person at the Alamo Drafthouse, informed me that plans for a Buffy Send Off at the new Lakeline location are in the works for May 20, the night of the series finale. When details are available, I'll pass them along.