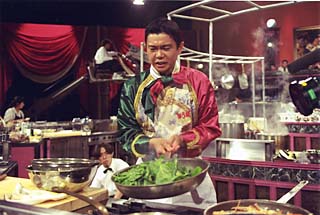 There used to be a TV commercial when I was a kid that featured two distinguished gentlemen walking into a pasture flanked by their advisers. There was a voice-over, which I don't fully recall. What I do recall is that when the men reached the middle of the pasture, the leaders of each group removed their suit coats, rolled up their sleeves, and began to fight. Whoever was left standing won "the war," sparing millions of dollars on war vehicles, weaponry, and young people's lives. Obviously, the commercial stuck with me, and I remember it as an anti-war statement. So, whenever there's a conflict somewhere in the world, I always imagine the leaders of the warring nations coming together in a field to beat the crap out of one another. It's an amusing, sometimes-absurd image, but preferable to the very real faces of burned and mangled children, emaciated P.O.W.s, grieving women, and empty-eyed soldiers.

I've been thinking about Bush and Hussein trading blows in some hole somewhere. But then I started to think, wouldn't it be more productive to have them come together to create something? A sweater, a poem, a loaf of bread, a nice soup -- anything to keep them out of their respective war rooms. If only war could be averted based on who made the fluffiest scrambled eggs.

Well if there were such an alternative to the war room, it might be Iron Chef. It marries the seriousness of cookery with warrior bravado and sports play-by-play action. The only weapons are speed, nerve, knives, and skills. This week, the series launches a series of cook-offs to beat all cook-offs in the first ever King of Iron Chefs Tournament.

For those not familiar with the cult classic, the Japanese import features a fictitious host and gourmand named Chairman Kaga who built his dream kitchen called Kitchen Stadium. Here, chefs from around the world are invited to do battle (cook-off) with his Iron Chefs, Japanese chefs skilled in various cuisines. Using a theme ingredient, a fully stocked kitchen, and a host of minions to chop, peel, and purée as needed, the dueling chefs must create a meal from the theme ingredient within an hour. A panel of judges taste and comment on the dishes. A final score is tallied, and the winner is revealed. What is most entertaining is the breathless camera and color commentary from the floor of Kitchen Stadium, as the chefs sweat over their creations. The prize? Glory, pride, honor.

The first battle takes place Saturday, April 5, at 9pm, with Chen Kenichi facing Masahiko Kobe. The theme ingredient: Tokyo X Pork (crossbred black-and-white pigs). The next battle, on April 12, features Morimoto facing Sakai with bell pepper as the theme ingredient. The winner of the previous battles will meet in a grand finale aired in three segments: parts one and two air April 19 and 26. The grand finale features the newly crowned king of the Iron Chefs competing against French Chef Alain Passard. (Why Passard, you ask? Because the Japanese adore French cooking.) Passard and the king of Iron Chefs will battle over Ron Kon Kai Chicken. The grand finale airs May 3.

All episodes of the King of Iron Chefs Tournament air at 9pm with encores throughout the week on the Food Network. Check local listings.

Also on KLRU, three acclaimed documentaries: Gail Dolgin and Vicente Franco's Daughter From Danang, on April 7 at 10pm; Strange Fruit, which reveals the little-known story of how an obscure Jewish songwriter and singer Billie Holiday created the legendary song, on April 8 at 9pm; and Kim's Nuclear Gamble, which explores U.S. relations with North Korea's Kim Jong-il, on April 10 at 9pm.