Cat and Mouse, Confined to a Kiosk 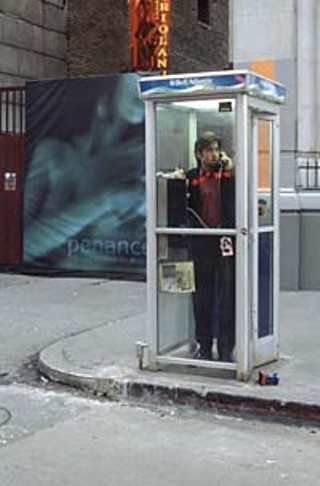 Joel Schumacher has gotten a bad rap over the years. When his name surfaces among film fans, he's invariably taken to task for the gaudy, histrionic silliness of the two Batman films he directed (1995's Batman Forever and 1997's Batman and Robin) and the following microcatfight that erupted between him and Austin-based Internet film guru Harry Knowles.

Previous to that, however, Schumacher seemed incapable of hitting anything but home runs, directing back-to-back hits such as post-adolescent angst-bomb St. Elmo's Fire, hyperstylized horror film The Lost Boys, as well as the supernatural Flatliners and the edgy Falling Down -- Michael Douglas' finest hour.

Schumacher began as a costume designer for Woody Allen during that director's fertile Seventies era before moving on to his first theatrical feature, the bizarre, uneven, but undeniably unique Lily Tomlin vehicle The Incredible Shrinking Woman.

It's Schumacher's newest film that may well be his best. Phone Booth is set almost entirely in a New York City kiosk where a weasely, conniving publicist (played by Colin Farrell) is pinned down by an unseen sniper (Kiefer Sutherland). The film takes place in real time and employs a variety of camera techniques -- split screen and so forth -- to jazz up the suspense to almost unbearable levels. It's a projectile of a movie -- bullet-fast, tense, anxious -- but for all that, the script, from cult favorite Larry Cohen, has a charming simplicity to it. It's almost as if an old episode of Rod Serling's The Twilight Zone had been updated for the modern paranoiac. We spoke with Schumacher while he was in town for SXSW, where he screened the film for an enthusiastic audience at the Paramount.

The Austin Chronicle: Let's talk about the genesis of Phone Booth and how you hooked up with the great writer/director Larry Cohen [It's Alive, Q].

Joel Schumacher: Phone Booth went through many machinations, which I was not part of, really, before I got it. I know Mel Gibson had been attached and then dropped out, then the Hughes Brothers had it for a while, then Michael Bay and Will Smith, and I think Jim Carrey flirted with it for quite a while. I had made a film called Flawless, and then I made Tigerland, and then came back to Fox to edit it. At that point, Elizabeth Gabler, who is president of Fox 2000, told me that they had never gotten Phone Booth off the ground and asked if I was interested. And I said yes.

AC: And so did you end up meeting with Larry Cohen?

JS: Oh sure. I don't know where he got the idea for the script, but at one point he did mention that he had talked to Alfred Hitchcock about this idea, so it's been around for a while now. I think he had a conversation with Hitchcock about whether or not you could make a whole movie work in a phone booth.

AC: It's a very Hitchcockian movie -- that phone booth really echoes the phone booth used in The Birds. Is what's onscreen more or less what Cohen had on the page or did you do some rewrites?

JS: We changed quite a bit, really. It's much younger than it was originally written. The characters are younger. The essence of it is the same, in the sense that Kiefer's character carefully chooses certain people and then decides to give them the opportunity to mend their wicked ways or else he'll mend them himself.

AC: At only 81 minutes, Phone Booth is edited to within an inch of its life. It really goes from frame one to the end credits without a pause.

JS: I didn't think we could hold the audience forever. With that in mind, I knew that it'd be roughly between 80 and 90 minutes. When I did costumes and sets for Woody Allen, in those days he always believed a movie should be 90 minutes and no longer, and I think that sort of stuck in my mind where this was concerned. I thought we couldn't dare go past 90 minutes. I could have padded it more at either the front or back or both, but I thought that would be unfair to the audience. One of the thrills of this movie was the first time we showed it to a research audience. As you know, those people don't know what they're going to see going in. They haven't read any reviews, they've seen no advertising, they know literally nothing. They walked in and I expected walkouts, because I thought, well, you know there are some people who go to the movies to see huge productions and this just isn't that kind of movie. It was very exciting to stand in the back of the theatre and just see the audience rapt, and everything is dead silent. It was obvious at that point that we'd done something right.

AC: How closely do you work with Mark Stevens, your editor, and whose idea was it to employ the split-screen technique in Phone Booth? Usually only Brian De Palma can get away with that, but here it works.

JS: As far as style is concerned, the first thing I did was ask Matthew Libatique, who had shot Tigerland, to do it. He also did Requiem for a Dream and Pi, the latter of which was the first work of his I saw. We did Tigerland in 16mm handheld, and he's just a little genius. We knew we had to keep Phone Booth moving right along because so much of the action takes place in an enclosed space, so by using the split screens we enhance the audience's feeling of what it would be like to be Colin in that situation. I wanted you to feel claustrophobic. It is one of those situations that could actually happen to someone, to be trapped in a public area by a sniper. I think that urban paranoia and this growing knowledge that we have that there is no privacy anymore, at all, is key to this film.

AC: Has reality hampered your filmmaking of late? With all the snipers, terrorists, and general malaise running riot, do you find yourself self-censoring things that before 9/11 you might have not worried about?

JS: I'm sure 9/11 has impacted all of us in ways that we're not even aware of, but it hasn't changed my choices of projects. There's certainly nothing that I was working on that I abandoned because of it, or anything that I've changed because of it. I find the criticism of Hollywood violence deserving many times, but I find it very disingenuous when that sort of criticism comes from the media because I think that the media truly exploits tragedy and gets to really take to the limits horror, death, tragedy. Then, if it's in a film, which people have to pay to see, then the media gets to say that we're exploiting violence. So, yes, I do find it a little disingenuous, and I also think there are some movies that are irresponsible where violence is concerned. But we live in a violent country with over 250 million guns, and I think that some of our stories are bound to reflect that violence in our culture. And really there's enough family product for everybody.