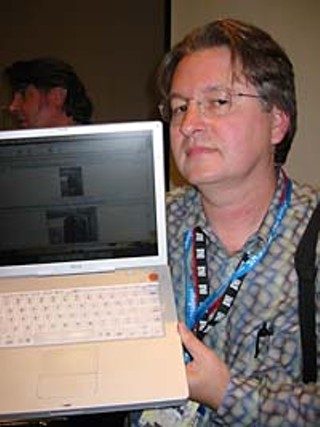 Bruce Sterling (Photo By Michael May)

Tuesday, March 11, 3:30-4:30pm
"The question on everyone's mind is ... " began Bruce Sterling's discussion on what the future holds, "will I invite the entire audience home for beer again? And the answer is ... yes! Come on by!"

Party invites were distributed, and the future, at least in the short-term, looked optimistic and inebriated. But before I could fully visualize the cold beer, Sterling and debate partner Derek Woodgate, head of the Futures Lab, were sprinting into the future at a manic and relentless pace. Sterling began with discussing open spectrum, which he predicts could cover the nation with wireless service in exchange for one "wasted" classic rock station. "Where is the business model?" Sterling asked gleefully. "Maybe there isn't one! People always assume that these tech guys are just tinkering away until somebody shows up with some money, and then they will start acting like adults. It didn't happen last time, and I don't think it's going to happen in the future. There is no money in this, there is no money in anything. TV can't make money. Newspapers can't make money."

Sterling started cackling, adding to the hallucinatory nature of his verbal assault. Before I could scribble that down in my notebook, not to mention comprehend it, Sterling was ranting about the current state of the U.S. media. "We have people by the millions going on the Internet to read British papers," he went on. "People are reading overseas papers just to find out what is going on in our own country! It is like radio-free America! Maybe information wants to be worthless. Maybe no one will ever learn anything worth knowing about anything ever again!"

I barely had time to get out of the way of Sterling's train of thought before he had sped by, and was disappearing into the distance, leaving a trail of insights and off-the-cuff remarks on ubiquitous computation, bio-technology, the inherent weaknesses in our health care system, foamed aluminum, and grassroots manufacturing, etc.