Tweet
print
write a letter
Yes, the stars that night were big and bright; they were also a little boozy, thanks to the "we never close" bar and bottles of wine happily perched on every roundtable. The free booze wasn't the only mood enhancer in attendance at Friday night's Texas Film Hall of Fame Awards; after Peter Fonda's heartfelt, if nonlinear, acceptance of Easy Rider's award, emcee Ann Richards first cracked, "I want whatever he's having," then mused, "I missed the brownies." And since caterer Word of Mouth's scrumptious desserts were piled high on every table, I'm pretty sure she wasn't referring to those brownies. The ceremony -- the third annual -- made for a casual but high-spirited, occasionally surreal evening, and not a little bit smelly too: from the sweet scent of corn hash and ritzy perfume to the heady stink of gently-sloshed-down-the-shirt Jim Beam, smoke (including what presenter Matthew McConaughey coined "the local vegetation") and, yes, maybe the slight whiff of good-natured stalking, too. Everybody had their eye on everybody else, from the highest-powered celeb's glee over being thisclose to inductee Farrah Fawcett to the lowliest reporter's sly maneuverings out of the press ghetto and into the Porta Potti line to rub elbows with Future Man -- that's Owen and Luke's older brother Andrew, a recurring player in Wes Anderson's troupe and mighty fine in real life and Marlboro Man beardedness. All told, an egalitarian, down-home, dammit! affair, which days later is little more than a fuzzy remembrance of much clapping, much laughing, much celebrating of film. But at least we'll always have the pictures. Himself introduced by Ann Richards with "it takes a heartthrob to introduce a heartthrob," actor Luke Wilson (r) gave older brother Owen (l) the Rising Star award accompanied by an earnest, if self-censored, speech: "I was gonna do a roast, but our parents are here." Owen Wilson kept his speech short and sweet, capping it off with an oft-repeated sentiment: "I'm happy to be here, and I'm happy to be from Texas." 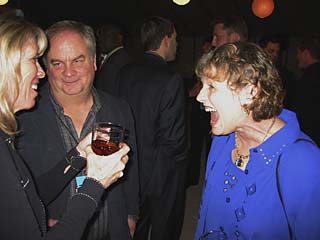 Actress Tess Harper (r), on hand to induct her Tender Mercies screenwriter Horton Foote (co-star Robert Duvall was also in attendance), chatted it up with Secondhand Lions writer/director and hometown fave Tim McCanlies and a Hall of Fame attendee who is unidentified, but clearly a great conversationalist. Ann Richards aptly summed up the evening's inductees with the note that, excepting inductees Horton Foote and Dooley Wilson, this year's Hall of Fame largely honored "the juvenile delinquents, past and present, of Texas film." Enter Matthew McConaughey (of whom Richards announced, "It's just a pleasure to watch him walk down the street"), who inducted his friend and fellow "local vegetation" enthusiast, Woody Harrelson (middle with brother Brett, left), whom McConaughey dubbed an "absolute cosmic cowboy." The two exchanged big bear hugs, and Harrelson accepted the award happily, remarking that Texas actors -- among whose ranks he stands tall -- are "the craziest bastards I've ever known." A genuinely moved Farrah Fawcett cell-phoned her parents from the stage and also did a little shout-out for the state's topography: "I actually love -- this sounds so stupid -- the shape of the state."