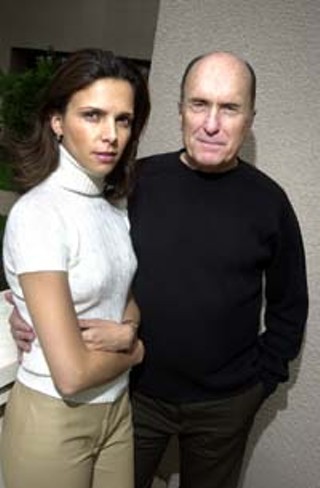 Robert Duvall loves to tango. Robert Duvall loves Buenos Aires. And Robert Duvall loves Luciana Pedraza, the ravishing Argentine-born woman who plays opposite him in Assassination Tango, a film in which the screen legend somehow conflates all these things. Written and directed by Duvall, Assassination Tango tells the story of John J., an aging New York hitman who becomes enchanted with the tango while on assignment in Buenos Aires. Like Duvall's best characters -- the preacher of The Apostle, the burned-out balladeer of Tender Mercies -- John J. is a man of deep flaws and contradictions. A murderer and a family man. A pragmatic and a romantic. "The tango is life," one character says, but John J.'s business is death.

Duvall and his partner and co-star Pedraza came to Austin to screen Assassination Tango Saturday night at SXSW, after premiering the film at the Toronto Film Festival and prior to the film's theatrical release at the end of March. Despite a reputation for being tough and moody -- in the production notes, producer Francis Ford Coppola calls Duvall "ornery, specific, individualistic" -- Duvall was in a smashing humor on the afternoon we met. "He's nice," the waitress whispered to me before he arrived. "He's really nice," the photographer said after he left. "He's about the nicest man I've met," said the publicity agent who introduced us. And indeed, Duvall was a gentleman of the highest order.

"The local daily recently said you were the only non-Texan who could pull off an authentic accent," I told him as we sat down for afternoon tea at the Four Seasons.

"I think Texans feel a kinship with you after Tender Mercies and Lonesome Dove. I think a lot of us figure you are Texan."

"The article said if Texan actors could be traded like sports stars, we'd trade Anna Nicole Smith for you."

"Who?" he asks, looking to Pedraza.

"Have you seen her reality television show?" I ask.

Duvall waves it off. At 72 years old, he has no concern for such frivolity. Instead, he is deeply invested in his passions -- tango, Pedraza, Buenos Aires, and, of course, making movies.

Austin Chronicle: Your films seem particularly interested in portraying people as real people. You even use nonactors, in this case a lot of tango dancers. Where did that idea originate?

Robert Duvall: Way back when, I saw the movie Tess by Kenneth Loach, the English director. And I came out going, "Whoa, I know it's not a documentary, I know it's fiction, but what a thin line." I always try to do that when I direct and act. I try to mix nonactors with professional actors and be as lifelike as possible. Sometimes they put the professional actor on notice -- no bad habits, it's their first time up, nice to work with people like that.

AC: Whose idea was it to cast Luciana as Manuela?

Luciana Pedraza: I knew it was going to be a good film, and so I asked for the challenge. Bobby never thought of me for that part. He suggested somebody else, and I think she's horrible. So I said, "Before you choose her, I'll do it." It sounds very easy, but it's a big responsibility. All these big names involved -- Francis [Ford Coppola] producing the film. And the fact that I'm his girlfriend, you're even more exposed.

RD: Nobody said anything, but you could sense the apprehension. Well, I don't know about Coppola. I'm not big into nepotism, but I knew we were on the right track with her. What was that one movie I did with Denzel Washington? [John Q.] We'd be on location, and she'd be improvising with him. She's a natural. To live in Argentina and have your own business and deal with the corruption down there, there's a lot of living by your wits. She's gotten herself out of jams by acting in a natural way, so I knew she could do that. We personalized things in our real life and put them in this imaginary set of circumstances. For that coffee shop scene we just set up two cameras and improvised for eight minutes. No script, just went.

AC: There's a good deal of improv in this film.

LP: Which is good for me, because I cannot read the script. I can't learn lines.

RD: Even in Spanish?

LP: Even in Spanish. I tried to do commercials in Argentina, but it didn't work. It's a limitation for me if I want to be an actress. So with this film, I'd remember which points I had to get across -- like I have to say, "You're from New York" -- but if something else came to my mind, I did have the freedom to put it on the table.

AC: Did you two meet in Buenos Aires?

AC: How did you meet?

RD: On the street. She approached me.

LP: I didn't want to, but my friends said, "Go invite him to our party. He loves the tango." So we walked around the block and talked. I said, "Mr. Duvall, here's my card. If you wanna come to this party, my friends would love to have you," with no expectations. And he came.

RD: Sure. [winking] She knew who Daniel Day-Lewis was.

LP: But I think it worked better, because I got to meet him, instead of the movie star. He was Bobby. And still, to me, he is just Bobby. And then I saw him working on The Apostle, and saw some of his other films, and I was able to admire his work.

AC: What do you love about it?

RD: Three in the morning, hundreds of people. Not like the United States, more like Spain. They know my movies, so I'm accepted there. They're a little bit arrogant, like the French. But they're also warm. I like the music, the tango.

AC: You've been interested in the tango for some time.

RD: It's a hobby I've had for several years. It's always good to have a hobby. It's not like riding a jumping horse, where you can break your neck. You might stub your toe, but it's not as dangerous.

AC: How were you first introduced to the tango?

RD: Fifteen years ago I went to Tango Argentina in New York, and afterward I met some of those guys. They said, "Come on, I'll show you some stuff." And then another one would say, "Don't go with him, he's no good." They all rip each other, just like in Argentina. María Nieves, who plays the aunt in the movie, she was one of the premier dancers with Tango Argentina at one time. She'd been dancing for 45 years, but for a while she was living alone, working as a cleaning woman. Now she's in a musical comedy, getting rave reviews. God bless her, I love her. And Géraldine Rojas, who plays the young sister in the movie, some people think she's the greatest dancer in the world now. And she's only 21. I've known her since she was a kid, and I used to dance with her when she was young, and if I didn't dance good, she'd walk away. Maybe only one time did she kind of smile and enjoy it. But now I don't ask her. She's got a little bit of a big head.

AC: Luciana, how long have you been dancing tango?

RD: If she wanted to, she could dance professionally. She's very elegant when she dances, which is a word that's used in Argentina a lot. We don't use it so much in this country. But it's attached to the tango -- even if you're a scoundrel, you can be elegant. Fino, one of the greatest dancers I ever saw -- Fino meaning fine, that was his nickname because he danced so fine -- he'd call tango "sweetness."

AC: So do you have any plans for Austin? Any two-stepping at the Broken Spoke?

RD: We were out at the Broken Spoke in the fall with Billy Joe Shaver. Luciana's doing a documentary about him. But now we don't have much time. I went to Sullivan's last night. We used to eat there a lot when I worked on Secondhand Lions. We'd eat with Michael Caine and his wife. It was nice. I genuinely like Austin, but we don't have time to do much. But we'll have a pleasant taste in our mouths when we leave.