isolation, unification: A short history of the weblog 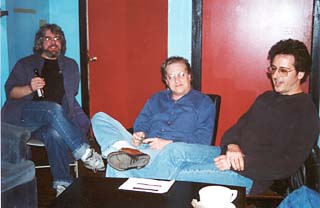 A "blog," short for weblog, is a personal Web site where the author records thoughts, ideas, images, and links in brief entries that are posted, usually in reverse chronological order. Weblogs became "blogs" in 1999, when Peter Merholz wrote, "For What It's Worth I've decided to pronounce the word 'weblog' as wee'- blog. Or 'blog' for short." The nickname got traction after Pyra Labs adopted the term for its weblog application, Blogger; now it's everywhere, including the Oxford English Dictionary.

Some blogs are trivial (in fact, celebrate the trivial), and some are significant representations of cutting-edge thinking. Some are A-list, with huge audiences, while some speak only to a small circle of friends. Most are individual, but some are team efforts. Professional blogs are appearing. Jupiter Research launched blogs by six of its senior analysts. Journalists like Dan Gillmor, Peter Maass, Andrew Sullivan, and Scott Rosenberg are blogging. Even celebrities have blogs, like Melanie Griffith, Wil Wheaton, RuPaul, Al Roker, and Jeff Bridges (whose blog is handwritten!).

Since the Internet bubble burst and hyperdelusional notions of Net-based wealth went south, blogs have become a major source of free online content (often licensed under the Creative Commons project, which offers free boilerplate licenses for those who want to give their content away while reserving some rights).

You can see blogs as an extension of zines, small independent magazines that published inexpensively, not for profit, but as a means of expression and a way to communicate. One of the most popular and influential weblogs, Boingboing.net, began as a zine published by Mark Frauenfelder and Carla Sinclair. Like many zinesters, they moved Boingboing.net from hardcopy to the Web, where Frauenfelder published occasional articles and eventually incorporated Pyra Lab's Blogger. Frauenfelder asked science fiction author Cory Doctorow to blog while he was on vacation, and it was like showing a duck his first pond: Doctorow jumped in, splashed around, then went for the fish with unprecedented gusto. Boingboing.net became a first stop for the best and brightest denizens of Greater Blogistan, and one of several blogs to inspire heavy adoption of the form.

During the dot-com frenzy an important technology emerged from the need to build efficient publishing systems for large Web sites: the content-management system. Content-management systems allow nontechies to add, edit, or delete Web site content through a relatively easy Web interface and publish the changes more or less immediately. The elements of the Web page that don't change are stored in a template, so if you're a writer or editor you can focus on the text you're creating; the technology automates the generation of a Web page that combines the template elements with your additions or changes. With this kind of software, daily updates are a cinch.

As dot-coms were tumbling, a few companies started building simple content-management tools to make weblogs and journals much easier to update. Blogger, Radio Userland, Movable Type, and LiveJournal are all free and more or less easy to set up, and they all found bunches of users. So many, in fact, that it's been tough to keep track of the emerging blogosphere without meta tools for searching, measuring, and especially filtering weblogs and journals. One of these tools, Blogstreet (www.blogstreet.com), showed 80,444 total blogs as of this writing and more coming on every day.

Is the "blog" a technology or a form of content? Smart Mobs author Howard Rheingold has an answer: "The technology makes it easy. The type of content is brief, contextual, opinionated, and linked. I'd say it's both." I asked author Doug Rushkoff if blogging is a killer app or the fad du jour. "Isn't there something in between?" he asked, adding, "I think it's an indication of the appropriate use of Web technology." How else might he describe it? "DIY, grassroots, bottom-up, chaotic, self-organizing ... capable of overthrowing a fascist regime. Just watch."

Blogging is more than writing and publishing: It's increasingly interactive. Bloggers link and respond to each other, and they include discussion links for feedback. Some technologies, like Slash -- the engine for Slashdot.org -- combine blogs with forums and include other enhancements, like reputation systems where comments are rated so you can filter out those with low ratios of signal to noise.

The blogger scene is well represented at SXSW Interactive, and in 2002 a blogmanic herd gathered in a circle for Ben Brown's session, "Taking Online Interactivity Offline," which was about extending the online community into the physical realm, something that people who form "virtual communities" have been talking about for years.

Brown and I had a hypercaffeinated discussion recently at Bouldin Creek Cafe, during which Brown said ironically, "You don't have a weblog because you're a socially adept person." However, there's an evident tendency for bloggers, like the ones that flock to SXSW, to want to find each other and form communities. Community building has always been an aspect of online experience. Relationships readily form in a text-based reality, where you are what you write, which means that you don't have to get past appearances. You can present a multidimensional view of your self -- your inner self -- so that people who find you online know you better than people you encounter in your daily experience of the physical realm, even if they've never set eyes on you.

If this social aspect of being online is what blogging's about, weblogs don't have to be literary. They're more like casual conversation, often trivial, sometimes profound.

Brown was pretty negative about weblogs when they first started popping up on his radar. In a personal essay he posted in March 2000 after appearing on a blog panel at SXSW, he quoted his own words, describing how he made a passionate condemnation of the increasingly popular blogs, suggesting that they were too trivial and a waste of talent: "It's quick, it's easy, but is a link to a wired news article and a snarky comment content? Is that what you want to be reading on the net? Is that what you want the future to be? Jesus man! That's not content! That's the patter for a radio ad!"

But if you forget the revolution, forget the literary aspect, and figure that blogs are conversations, it's easier to make sense of their popularity. While blogs may appear at first glance to be traditional one-to-many published pages, they're actually a manifestation of the many-to-many conversational character of the Internet. Bloggers read other blogs and respond, they link to each other, and many if not most blogs incorporate feedback via the discussion component mentioned earlier. Nobody's satisfied hanging solitary thoughts on a sign -- they want to correspond.

One group of Austin bloggers has created a metablog Web site (www.austinbloggers.org), a compilation of items originally posted to other sites. In this case, the site picks up posts automagically from sites built with Movable Type's weblog software, using a feature called TrackBack, a tool that integrates blogs by allowing bloggers to link related content items. Austin Bloggers, by accumulating links to Austin-related items posted at participating sites, represents an active slice of the growing Austin community of bloggers.

It's hard to tell just how big the local community is, because there's no authoritative tally. Evan Ralston's Austin Index at www.koax.org/austin/index.php lists almost 90 weblogs, but that list is not comprehensive. I entered "Austin" and "Texas" as search keywords at Blogstreet and got 103 hits, but Blogstreet's list is also limited. Then there's Meetup.com, a Web site that orchestrates physical meetings of various special interest groups, from JAG fans to Slashdot devotees to Chihuahua lovers. The Weblogger Meetup was one of the first the company organized, and the one for Austin has 52 members.

As Austin bloggers find each other, local blogger David Nuñez says he expects more than technology. "It's my hope that our fledgling community broadens our discussion away from just geeky stuff," he writes in an e-mail to the Austin Bloggers e-mail list. "For example, I want to learn from the rest of you about how to craft good stories, hear your experiences dealing with visitors and privacy, and discover what you think this whole blogging thing means for our society and, in particular, Austin."

So what's the big deal? Why blog? Not for money, probably not for fame, but yes for fun -- double yes for connecting with other people. Says Austin blogger and translator Adam Rice, "I think that many people, myself included, have a primal urge to create order in some corner of the universe. Tinkering with my blog is one way to give vent to that urge." And Nuñez adds that "the personal/vanity Web sites are the business cards of the 21st century because they have substance; with my site, people can get a better idea of what I know, where I am coming from, and most importantly what I am doing." He adds, "My web presence allows me to shake new hands over the ether."