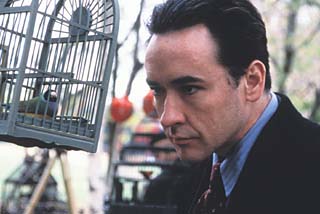 John Cusack examines the nature of evil in Max.

John Cusack may not be the greatest actor of his generation, but he is probably its most likable. Fifty films in two decades, not an Oscar nod between them, but people don't just like John Cusack, they want to be his best friend. We spy ourselves in the characters he plays -- sarcastic, cerebral, flawed. The record shop owner who can't commit to anything but pop music. The playwright grappling with his own mediocrity. A guy so down on his luck that even his suicide attempts fail. I'm a Lloyd Dobler woman myself -- even though that character, penned by Cameron Crowe for his debut film Say Anything, was so perfect and heartbreaking that it forever skewed the romantic expectations of a generation of women. But Lloyd Dobler was more than a new kind of Romeo, he was a new kind of folk hero, a high school student with no convictions but true love, certain only of his uncertainty. "I'm looking for a dare-to-be-great situation," Lloyd Dobler famously said. Who couldn't sympathize with that? Cusack has branched out, of course -- brilliantly kicking off his sweetheart image by playing a hit man in Grosse Pointe Blank (which he co-wrote and -produced) and a shockingly unappealing puppeteer in Spike Jonze's Being John Malkovich. But no matter how he morphs as an actor, it's hard not to think of him as Cusack, our Cusack, whomever that particular Cusack may be.

"You've said that the character you most resemble is Lloyd Dobler," I begin.

He interrupts. "Did I say that?"

"Maybe the better parts of me. But I don't know."

Fortunately, for all of us, there is a solution. "Have you taken the John Cusack Test?"

"It's a multiple choice test." (From the Web site: "Ever wonder which John Cusack character you're most like? Well, wonder no more!") "I took it, and it says I'm like Gib from The Sure Thing."

"I wonder which one I'd be like. Wow. I've never even taken my own test."

Surprisingly, John Cusack thinks he might most resemble his latest character, Max. "Somewhere between Lloyd Dobler and Max is probably the closest to me," he says. And it's a different, darker Cusack than the one to which we are accustomed. Max is a man plagued by shades of gray, a sophisticated Jewish art dealer in 1918 Munich, haunted by the war that took his right arm and, with it, his future as a painter. He's an unfaithful husband, torn between the bohemian life that fires his imagination (represented by his mistress, played by Leelee Sobieski) and the wife who anchors him (the luminous Molly Parker). But we sense Max is a decent man. In one of the film's most tender moments, Max tucks his children into bed. Cusack looks as we have never seen him before -- lines etched around the mouth, love burning in his eyes, his hand stroking his son's head. Paternal.

"You've done so many movies, and I can't remember ever seeing you play a father before," I tell him.

Noah Taylor as the young Hitler.

"I did in a movie called Pushing Tin."

I admit I didn't see it.

But the most shocking part of Max -- the part that kick-started a controversy before the film opened and threatens to eclipse it still -- is its secondary character, one young and despicable Adolf Hitler (played by Noah Taylor). Hitler is an aspiring painter, but a mediocre one, who clings to quaint artistic notions at a time when the traditions are imploding -- the age of Surrealism, Dadaism. But, like Max, he is a war veteran, and the two strike an unlikely accord.

"They're both drunk on art," Cusack says. "Max believes that all art is going to have a political consciousness because his father's gods all led them to the slaughterhouse of World War I. He knows that Hitler feels that, too, but I think he feels that Hitler represents the kind of regression energy that led him to the war in the first place. So here's this guy, who obviously believes that art is about ideas and ideas are power, and Max says, all right, come on up to the higher ground, because didn't we just see horses and gas masks six months ago? Didn't we just see 60,000 people slaughtered in 20 minutes for the first time in history?"

Max is the debut of Dutch filmmaker Menno Meyjes (The Color Purple screenwriter), and it is an audacious one, a lushly captured period drama that is a challenge not only in its discussions of politics, art, and power, but in its attempt to cast the 20th century's most vilified figure in a human light.

"That's not a truth we would like to face, that Hitler is one of us," says Cusack. "But that person tapped into parts of our unconscious. I mean, people followed him, and unfortunately, that's not up to debate. Unfortunately the guy wasn't a monster that came down from Pluto with pink vapors and lightning bolts and then left in a cloud of dust, he was a human being. And he has human characteristics and human sets of desires that we can relate to just like we can relate to some of the higher aspects of his character."

The mere suggestion of "a human Hitler" was enough to set off a contagion of knee jerks prior to the film's release, including a campaign by the Jewish Anti-Defamation League calling the film "a psychic assault on Holocaust survivors and the entire Jewish community." (They eventually apologized.)

Cusack, notoriously press-shy, rushed to the film's defense, cannonballing into the interview circuit and telling anyone he could that Max was a "deeply moral" film, its depiction of Hitler relevant to today's debate about Osama bin Laden and the nature of evil. "I just don't think it's morally responsible to look at evil in a superficial way," he says. "Actually, I think it's destructive."

He is not only the film's star but also its producer, who took no salary for his role. This is, perhaps then, Cusack's own dare-to-be-great situation. For years, we have known Cusack as an outspoken liberal with aspirations of art, an actor of intelligence and wit who took films that reflected his skepticism of celebrity (Tapeheads, The Player) and conservatism (Bob Roberts, The Cradle Will Rock). Max may be the fullest expression of these political and artistic urges, a film that rattles our notions of Hitler at the same time that it offers a portrait no one has dared to depict. But the risk is great: Can we believe John Cusack would befriend Hitler? Can we believe John Cusack when he says, clapping his hand on the back of a man who will unleash unspeakable horror in the world, "C'mon, Hitler, I'll buy you a lemonade"?

"That line is kind of this litmus test for people who understand the film and people who don't understand the film," says Cusack. "There are people who can admit that the line makes them uncomfortable, but they understand that within that discomfort is part of what makes the film interesting. We think this guy, Hitler, he's not human. This is Grendel. He lives in a cave and drinks blood. He doesn't drink coffee or lemonade. He doesn't want to meet girls. Unfortunately, he did. He was a human."

Toward the end of the film, Hitler seizes upon the equation that will fuel his evil genius: Art plus politics equals power. After a scene in which he crumbles at his own artistic impotence, he rallies back, ranting and spewing to a roomful of brutish Germans, pumping their fists as they yell "blood Jew."

"The one original idea Hitler had was that art and politics would forever be fused together," says Cusack, "and whoever controls images and symbols and the aesthetics of art has power in the modern world. And right now, somewhere on the al Jazeera network, there's somebody screaming 'blood Jew.'"

As portrayed by the Australian Taylor (perhaps best known as the younger David Helfgott in the 1996 movie Shine), Hitler is a peevish, beaten dog of a man, not yet devoured by insanity, but clearly on his way. The experience was reportedly grueling for the actor, who lost weight and touch with reality playing what must be one of the most challenging character roles of all time.

"We would try to talk a little afterward," Cusack remembers, "and he would say, 'Look mate, if I seem a little distant during this process ...' I said, 'Noah, please. We'll talk when the movie's over.' I mean, I wouldn't have had the guts to do that."

But Cusack's portrayal of Max is plenty brave, too. Here is his generation's most likable actor playing not an irony-prone charmer or a cartoonish loser, but a deeply divided man, struggling to find balance, grasping to find the best in himself and others. It's a John Cusack character who isn't so immediately like us. Or maybe, perhaps, he is.