The Good, the Bad, and the God on TV 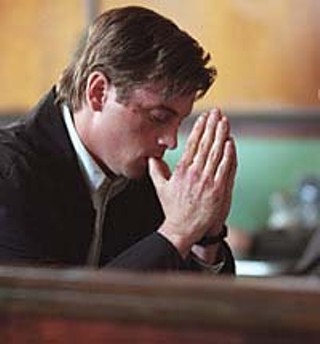 ABC's new drama Miracles is one of the few shows on television to address issues of religion and spirituality.

After nine seasons, CBS recently announced this was the last year for the venerable Touched by an Angel. A big end-of-series sendoff is planned for May. It's not like I'm going to miss the show. The show's one-dimensional vision of God as male and Christian was no more enlightening than its lead angel Roma Downey (watching her is a lot like watching water evaporate). Even so, she picked up a TV Guide Viewer's Choice Award along the way, which she can now bring along if she joins WB's The Surreal Life -- like Emmanuel Lewis, who displayed his People's Choice Awards in Surreal Life's premiere episode ... am I the only one who watches this show?

But back to Touched by an Angel. Its cancellation, coinciding with the premiere of Miracles on ABC, has made me think about God and TV. The current state of the world, last week's episode of the The Simpsons (in which Homer took prayer to a ridiculous level), and the sight of The Surreal Life housemate Vince Neil rediscovering prayer (in one of the most strangely touching moments on reality television) has brought God to my TV-watching consciousness.

It's curious that in some of my favorite shows, like Buffy the Vampire Slayer or The X-Files, God or godliness isn't so much absent as it is largely unmentioned. When it comes down to it, what is more present is evil: the big bad. As if to say -- without saying it, of course -- that God is present. There's no need to talk about it.

But I'm wondering if there should be.

Which is why I was intrigued by the new ABC series Miracles. The series stars Skeet Ulrich as Paul, a priest who investigates modern miracles. Unfortunately, he is always able to find an ordinary explanation to explain previously thought extraordinary events, deflating the hopes of those who called upon him and, in the process, diminishing his faith. When he encounters his first real miracle -- a sickly child who can heal others -- he is convinced that miracles do happen. Unfortunately, the church does not agree, and Paul is dejected. He is then recruited by Alva Keel (Angus MacFadyen), a former Harvard professor and investigator of paranormal events.

In a pivotal scene when Paul first meets Alva, he reveals that before the young healer saved him from dying in car wreck, he saw his blood spell the words "God is now here." Alva says this "hemography" is familiar to him from his research. However, what his informants told him they saw was "God is nowhere." I can't remember a more hair-raising moment. And it is this scene that locks their alliance. They are driven by the need to know whether "God is now here" or "God is nowhere."

Perhaps because Miracles executive producer David Greenwalt, whose credits include Angel, Buffy, The X-Files, and the short-lived Profit, is attached to the show, Paul and Alva's "purpose" turns out to be to defeat an unknown "darkness" that will engulf the Earth. We've seen that. What could propel the series in a new and powerful direction is to see how these reasonable adults find themselves at a crossroads, asking themselves some of the most profound questions with which a human being may wrestle. But this is TV, so it's likely the more familiar "good vs. the mysterious dark evil" will prevail. It may be laughable to think TV is the place for these huge questions to be considered, but hey, The Simpsons does it all the time. It is the one show on prime time to intelligently, albeit irreverently, engage in discussions of God and faith. Several episodes leap to mind, including one of my favorite ones, in which Lisa becomes a Buddhist. Is it too far-fetched to believe that this discussion can be successfully brought to a live-action format?

After the World Trade Center attack, a friend said, "El diablo anda suelto." The devil is loose. He was speaking of how the destruction, followed by accusations, followed by threats of retaliation and expressions of hatred, had made evil real. Now, as the specter of war looms, his words seem even more potent. However, I wonder if it would be possible to drum up some goodness, some grace, some contemplation beyond the perimeter of our collective navels that doesn't rely on crackerjack notions of God and good and evil. It never hurts to ask.