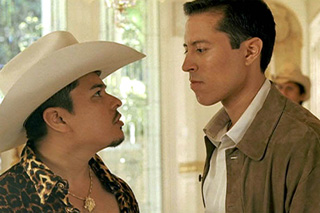 What does NBC's new Kingpin mean for the representation and presentation of Latinos on television?

This is one of those columns where I just can't win. Conservative Latinos will complain if I don't criticize the lack of positive Latino role models on TV, while the "We Are the World" front will say, "Why do you have to put being Latina in the forefront?" My African-American best friend will say I didn't say enough about why a brother was with a white woman, while my writer friends will wonder if I caught all the influences from Macbeth, The Godfather, The Sopranos, and a certain former first lady. Some old activist college friends wonder why I bother to watch TV at all, while my mother still marvels that I watch TV in order to write this column -- and that someone pays me for it. Such is the so-called burden, watching TV while Latina, sitting down to review Kingpin (NBC).

The new, midseason drama premiered on NBC last Sunday with a second episode on Tuesday. It's been widely described as network television's answer to The Sopranos, while others worry that its subject matter -- Mexican-American drug lords -- will offend U.S. Latinos, a market Hollywood has a deep interest in courting.

I don't think there's anything to worry about: There's something to offend or amuse everybody. For those drawn to the seedy underworld of narcocorridos and other pulpy accounts of the drug trade, there's Ernesto, the half-cocked heir apparent to the family business, hilariously played by Jacob Vargas. Alas, his reign is brief, though if previews are any hint, Danny Trejo (Spy Kids) may take up that torch in future episodes.

For those seeking bread-and-butter family values, there's central character Miguel Cadena's (Yancey Arias) loving relationships with his young son Joey (Ruben Carbajal) and his brother Chato (Bobby Cannavale). For those who like their antihero's guilt played over easy, there's Miguel's visits to the church. After a successful drug run, Miguel dutifully brings his tithe to the church and talks with the priest, who, like The Soprano's Carmela and Dr. Melfi, knows just as much as he wants to know about Miguel's business, but not too much to make him refuse the money.

Perhaps the most interesting relationship in Kingpin is that of Miguel and his wife Marlene (Sheryl Lee). Unlike Diane Keaton's Kay Adams in The Godfather, Marlene is a lawyer working for the family, as well as Miguel's wife and confidante, with her talons deeply set into the business. She's also a white woman and ultimately an outsider. She's also an outsider in her marriage, too. When she and Miguel successfully orchestrate Ernesto and family patriarch Tío Jorge's assassination, she wants to celebrate. Instead of being turned on by her slinky come-on, Miguel pushes her away: "This is nothing to be happy about." Marlene turns to cocaine to soften her husband's rebuff while Miguel spends a quiet evening with his son.

In Miguel and Marlene's relationship, there is great potential to show how race, power, and imperialism interplay on a larger level. Besides her son with Miguel, what does Marlene have to lose? More importantly, what does she have to gain? If her marriage dries into a business-only interaction, will she ever successfully overtake the family operation? Within a compact six-episode run, it's doubtful these questions will be answered. However, if the series can examine the previously mentioned power dynamics, then it will be a success in my opinion.

Still, I can't help but be disappointed that NBC's first attempts at producing a Latino-themed drama of this scope have to be set against the backdrop of drugs and corruption. Why couldn't Miguel be Mister Cadena, like Mister Sterling, that other NBC series set against the intrigue of state politics? Politics may be no less seedy, but at least it's less sensational. For an answer to this, I turn to the Chicano cartoonist and rabble-rouser Lalo Lopez. When he is criticized for "making fun" of Mexicans and Latinos in his scathingly funny work, his response is that Latinos are hypersensitive to pop-cultural images of themselves because there are so few to choose from. If Homer Simpson were one of only a handful of white male images offered, would he be as acceptable?

Some readers will complain that I've sold out. Others will lament that their "Mexican friend" likes the show, so why don't I? In the end, what I really want is more. More Latino names and faces in front of and behind the camera. Kingpin is a laudable effort. But it shouldn't be the only one to get the coveted Hollywood green light.