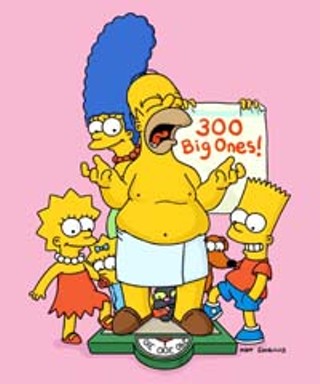 Fox's long-running and much-loved The Simpsons celebrates its 300th episode on Feb. 16.

Oh sure, The Osbournes have turned heads while others long for the good old-fashioned family values of the Bradys, the Cleavers, and the Waltons. But when it comes to longevity there's nothing like The Simpsons, who celebrate their 300th episode on Feb. 16.

Even die-hard Simpsons fans have lamented that the series has stumbled in its 14th season. There have been a couple of clunkers, but nothing can beat The Simpsons as a deliciously clever, delightfully subversive, wacky, sometimes-heartwarming, and just-plain-fun adult cartoon. How many other shows in television history can claim to have accomplished as much?

While Fox has renewed the series for two more years (through 2005), I can't help but feel that its time is over. If, as other media critics have opined, TV has entered the dark ages with the explosion of low-rent, bad-taste-driven, reality fare, where does a show with an army of creative collaborators that manages to satirize some of the most pressing issues of our time stand? And it's getting worse. While CBS is quietly reconsidering The Real Beverly Hillbillies series, a reality show that plunks an impoverished family in the middle of Beverly Hills to see how they survive, there are droves of other shows waiting to take its place. Case in point: Are You Hot? Currently in production at ABC, Are You Hot? will pit preening-and-parading contestants against one another to determine who is the sexiest man or woman of the bunch. Nothing more, nothing less. As long as the lowest of the low continue to pull in viewers, there's no telling when (or if) the reality phase will peak and fizzle.

Special guests on the 300th episode of The Simpsons ("Barting Over") include Blink-182 and skateboarder Tony Hawk as Bart's new neighbors after Bart moves out, thanks to a settlement he wins when he takes Homer to court to win his emancipation. Jane Kaczmarek (Malcolm in the Middle) also guests as the judge who hears Bart's case.

Bookending the 300th episode is a repeat of "How I Spent My Strummer Vacation" and a new episode, "I'm Spelling as Fast as I Can." In this, Lisa wins a spelling bee and is invited to enter the Spellympics. And it's not just Fox celebrating the milestone 300th episode. Bravo's Inside the Actors Studio will air a special episode, featuring regular cast voices Dan Castellaneta, Yeardley Smith, Julie Kavner, Harry Shearer, Hank Azaria, and Nancy Cartwright. On the lowbrow end of celebrations, Fox has brought together the entire cast of Married ... With Children for a retrospective. An hour of the Bundys! The crass Bundy family may have been an early hit for the once-struggling network, but they are no way to celebrate The Simpsons.

The Super Bowl is over, and there are no major holidays in sight, making February the most volatile of the sweeps months, in my estimation. Here are a few things to look for:

The premiere of Kingpin (Feb. 2, 8pm, NBC). The peacock network has a lot riding on this new series. Set in the underworld of a Mexican family-ruled drug cartel and intended to match the gritty realism of The Sopranos, this show has the potential to be extraordinarily brilliant or extraordinarily offensive. To take full advantage of February sweeps, the series will air on Sundays and Tuesdays and rerun on Bravo (the director's cut) and Telemundo in March.

If hard news is your pleasure, then you'll be happy to know that NBC's Dateline will air a special, "Michael Jackson Unmasked," which will examine the how and why of Jackson's plastic surgeries. Airdate TBA.

One of the most anticipated guest appearances during February sweeps is the guest appearance of Christopher Reeve in Smallville (WB). Reeve, who rose to stardom playing Superman on the big screen, appears as Dr. Swann, a scientist who clues Smallville's young Clark Kent (Tom Welling) into his destiny. While the door is open to make Dr. Swann a recurring character, no final deals have been made.