The Case Against Kissinger

Regarding Henry and his war crimes in Eugene Jarecki's new documentary 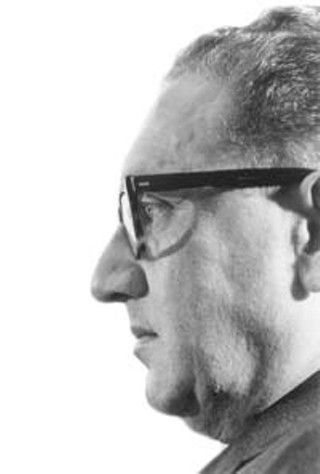 Although the primary focus is the amassing of an HK rap sheet, Eugene Jarecki's The Trials of Henry Kissinger may be more about the current geopolitical climate than the title would suggest.

As with many children of the Seventies, my initial knowledge of Dr. Henry Kissinger -- then-President Nixon's secretary of state -- came from the funny pages. Garry Trudeau's Doonesbury, to be precise, where Dr. Kissinger was a common topic and off-panel character (although the notion of that elder statesman's appearance in, say, Peanuts remains enticing to this day -- the metaphorical overtones of Charlie Brown and his naive battle against Lucy's perpetual place-kicking treachery is simply too juicy to ignore). Later, of course, came Peter Seller's crafty parody of the man in Stanley Kubrick's Dr. Strangelove and, later still, came reality.

It's the latter that is the focus of filmmaker Eugene Jarecki's new documentary, The Trials of Henry Kissinger (co-produced and written by Alex Gibney), and although the film's title is -- at this stage, anyway -- wishful thinking, the film, commissioned by the BBC, provides enough moral and ethical ammunition against the man to bring his gilded career as global statesman to a grinding halt. One can assume that is exactly what Kissinger must have been thinking when, while on a nonofficial visit to France in the spring of 2001, he was subpoenaed by a French judge for questioning regarding his role in the regime of Chile's Augusto Pinochet. (To date, similar summons have been issued by no less than six countries, the last one being England, this past April.)

"Like a lot of us, I grew up in the early Seventies, where Dr. Kissinger's name was synonymous with statesmanship and statecraft," says Jarecki. "He was very much a childhood icon in my house because my father had also been a refugee from Nazi Germany, and among other things, he looks significantly like Henry Kissinger. So in my household there was always sort of a warm spot for Henry Kissinger, who was viewed as sort of this immigrant success story.

"I learned very little to disabuse me of that impression, and it wasn't until the spring of 2001, when Kissinger was served with that French summons, that I discovered that there were things contrary to what I had understood about him."

Jarecki's film, which takes its title from the book by journalist and full-time Kissinger-baiter Christopher Hitchens (to whom Dr. Kissinger has referred as a Holocaust-denier, among other choice mal mots), is at its heart a deeply felt investigation into not just Dr. Kissinger's often-murky moral framework -- he was the chief architect of the bombing of Cambodia, the man behind the bloody Chilean coup that toppled popular President Salvador Allende and replaced him with notoriously brutal puppet Pinochet, and approved Indonesia's use of U.S. arms to massacre some 100,000 East Timorese -- but an examination of the role of U.S. foreign policy to date. The current Bush administration, with its recent withdrawal from the world court, is clearly acting on a precedent set by Mr. Kissinger himself, one that revolves around the idea of special privileges for the U.S. (And here it's important to note that the Latin root of the word privilege means "private law," the law of the wealthy and elite, the law of the victor and not the victim.)

Says Jarecki, "The film really has two distinct subjects: First, the very desperately needed discourse about the accountability of U.S. figures under international law; can an American -- in the eyes of our government -- commit a war crime? Or are the laws that are written to apply to crimes against humanity and war crimes -- laws that the United States has contributed to and helped to write -- only for the losers of conflicts and only for our enemies?

"Obviously that's a hugely important subject to deal with right now as the U.S. is sending a signal to the world that it means to be the moral policeman of the world. To think that the world's moral policeman is actually a practitioner of victor's justice sends a signal of lawlessness that I think is terribly confusing to the world. When lawlessness emerges, whether it's in the form of terrorism or other forms, I don't think that one can be terribly surprised when the message that the United States itself is sending out is fundamentally amoral and lawless."

In the end, though, The Trials of Henry Kissinger may be more about the current geopolitical climate than the title would suggest. With President Bush's recent appointment of Dr. Kissinger to head the 9/11 Commission -- an appointment abruptly canned by Kissinger himself when he was told he'd be subject to full disclosure -- the film is as timely and topical as can be imagined. That it paints Dr. Kissinger in an obviously unflattering light (and eloquently makes the argument for a genuine trial, indictment, and conviction of Kissinger on the subject of war crimes) is an unavoidable result of Dr. Kissinger's own actions, all of which, by the way, are a matter of public record.

As our government marches headlong into a "war on terror," U.S. accountability in the field of realpolitik has never been a more pressing issue. And the example of Dr. Kissinger, as the chief practitioner of realpolitik on the global playing field, is a lesson and a warning that ought not be ignored.