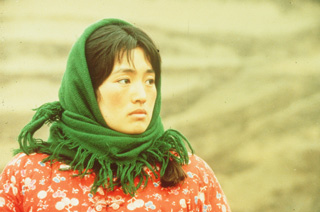 The Story of Qiu Ju

In 1978, a reopened Beijing Film Academy took in 153 students, children of the turbulent Cultural Revolution that had led to the academy's closing 12 years earlier. Many of these aspiring filmmakers were born to upper-middle-class families whose lives had been turned upside down by China's Cultural Revolution. Chen Kaige was pressured to publicly denounce his own father, pushing and shouting at him as, nearby, his Red Guard classmates raided the family's house and burned their books. Zhang Yimou was ostracized for his father's counterrevolutionary involvement and forced to work in factories for 10 years before he was allowed into the academy. Once these new students passed the academy's battery of rigorous tests and were finally admitted, though, they were allowed something no student there had been given before: a comprehensive survey of the films -- by Godard, Bergman, Fellini, Kurosawa, Tarkovsky, Truffaut, Pasolini, Fassbinder -- being made outside the world they knew.

Institutionally guaranteed work upon their graduation, this new generation of filmmakers was released from the academy in 1982 but routed into remote locations for their first assignments, because their predecessors, who had faithfully waited out the revolution for their turn behind a camera, had been given priority at the larger studios. Scattered in these distant parts of the Chinese countryside, the class of 1982 would find the inspiration for a reinvented Chinese cinema while working in a seclusion that amounted to creative freedom from their overseers. The gorgeously photographed, morally ambiguous, and richly allusive films this "Fifth Generation" would make -- starting with 1983's The One and the Eight (Directed by Zhang Junzhao with cinematography by Zhang Yimou) and 1984's Yellow Earth (directed by Chen Kaige) -- would soon revitalize Chinese cinema and garner international acclaim, even as the films became increasingly better known outside China's borders than within them.

China's vibrant new wave of cinema crested in the mid-Nineties -- with such award-winning high-water marks as Zhang Yimou's Raise the Red Lantern and Chen Kaige's Farewell My Concubine -- and crashed not long afterward, as Chen's big-budget flop The Emperor and the Assassin and Zhang Yimou's decision to screen his To Live at Cannes without first getting government permission raised the impatience and ire of Chinese authorities. As the Fifth Generation's key figures suddenly found themselves the object of government restriction and punishment, the world media spotlight moved elsewhere. Starting on Jan. 21, Austin audiences will have a chance to revisit key works of the Fifth Generation's heyday on the big screen, as the Austin Film Society presents "The Fifth Generation: Chinese Film of the Past Two Decades."

The series kicks off with The Story of Qiu Ju, directed by Zhang Yimou -- who, with Chen, is one of the Fifth Generation's most-respected filmmakers. Following his lavishly mounted period epic Raise the Red Lantern, The Story of Qiu Ju -- set in contemporary times and starring Zhang Yimou's trademark heroine, the glamorous Gong Li, here frumpily dressed down and hugely pregnant -- represents an abrupt stylistic shift for the director. Zhang Yimou goes to great lengths in Qiu Ju to capture the daily reality of everyday China, using hidden cameras and nonactors to lend the narrative a documentary quality. The film's plot is deceptively simple, concerning an ordinary woman's search for justice in a minor legal case. Within this framework, though, Zhang Yimou gently explores themes that will be revisited in all of the films in the AFS series: the resiliency of women, the rift between the justice of official law and warmth of human society, and the markedly different values of rural and urban China.

This last theme is central to the second offering of the AFS's series, A Mongolian Tale, in which a pop star (played by Mongolian musician Tengger, who also composed the film's score) returns from the city to his native Mongolian grasslands only to find his childhood home -- and the woman he left behind -- changed forever. Director Xie Fei is actually a filmmaker of China's Fourth Generation and not its Fifth, having been educated before the Beijing Academy closed in 1966 and not given the chance to make his debut until 20 years later. Appropriately, his Mongolian Tale is a bittersweet ode to opportunities that will never be regained, filled with a heartbreaking regret that gradually gives way to serene acceptance.

Like A Mongolian Tale, Yim Ho's The Day the Sun Turned Cold tells the story of a city dweller who returns to the small town of his youth. In the case of this icily beautiful mystery, though, the hero has returned to accuse his mother of the murder of his father, whose death occurred 10 years earlier. As with The Story of Qiu Ju, The Day the Sun Turned Cold deals with the gap between legal justice and human warmth -- contrasting bare government offices and barren snowy hills with warm interiors flooded with light and steam -- and features complex characters simultaneously capable of both good and evil.

The centerpiece of the AFS series is formed by two strikingly different films by Fifth Generation master Tian Zhuangzhuang. Horse Thief (which screens second of the Tian films, though it is an earlier work) offers another look at rural Mongolia, but the film is radically different than A Mongolian Tale -- and, in fact, than most films in general -- in that it relegates the human element of its narrative to the background and focuses instead on the harshly beautiful Mongolian wilderness. Horse Thief's dialogue adds up to about a paragraph, and its plot is as skeletal as is its gaunt title character (a thief, ostracized from his clan, who we watch waste away under bone-white skies swarming with vultures); it seems more like a celluloid poem or a Chinese transliteration of Robert Flaherty than a narrative film. It's also blessed with some of the most unbearably beautiful images of Nineties cinema, each sewn to the last via a series of glacial dissolves whose meditative, organic rhythm seems unintentionally to evoke such landmark film-poems as Brakhage's The Act of Seeing With One's Own Eyes and Dog Star Man.

Compared to Horse Thief's radical structure, 1993's straightforward family drama The Blue Kite appears at first to represent a drastic departure in Tian's style. However, this heart-wrenching indictment of the Cultural Revolution is as courageous with its politics as Horse Thief is with its aesthetics. Following a Chinese family from the early 1950s through the worst of the 1960s and watching patiently and compassionately as their lives are gradually torn apart, the film -- which has never been seen in China -- led to Tian's being placed under surveillance by the Chinese government. A brilliantly composed, flawlessly acted, indispensable work, The Blue Kite is a vital portrayal of self-righteous ideology spilling over into unchecked collective madness.

Helmed by Ermo director Zhou Ziaowen, The Emperor's Shadow meanwhile deals with a repressive government in China's far-distant past, and it's the only example in the AFS's program of the genre Fifth Generation filmmakers are best known for, the period spectacle. Enacted with a cast of thousands back in the days when government-supported Chinese studios were unconcerned with recouping production costs, The Emperor's Shadow is a larger-than-life evocation of the brutal grandeur of China's first empire. Full of gaudy excesses and graced with a wry wit, The Emperor's Shadow trades the traditional Chinese subtleties of character for a dissection of ancient court intrigues that one-ups Bertolucci's The Last Emperor and, in a few of its wickedest scenes, recalls the archer moments of von Sternberg's The Scarlet Empress. Overall, the film is less satisfying than subtler works like The Story of Qiu Ju and more urgent ones like The Blue Kite, but it's an undeniable delight to see a contemporary epic whose teeming masses and titanic monuments occupy genuine physical space rather than some computerized ether.

While it's odd that the AFS series features no movies by Chen Kaige, who, with Zhang Yimou, is one of the generation's best-known directors, it's clear that the overall goal of the series is to screen slightly lesser-known work that may have never appeared previously in Austin theatres. These films, each of them beautifully filmed, alternately subtle and sweeping, and full of uniformly exceptional performances, beg for another chance to be projected on a big screen. Especially now that attention from media and distributors has moved on, and the international work that graces Austin screens is more likely to include worthy offerings from the Middle East, Japan, or Mexico than from mainland China, it's nice to have this series send our way a belated shipment of treasures from only a generation ago.