This film rendering of the sordid junkie degradation and deaths of Sex Pistols' bassist Sid Vicious and girlfriend Nancy Spungen bleeds through with a tad too much MTV, but few music biopics can top Gary Oldman in Sid & Nancy. 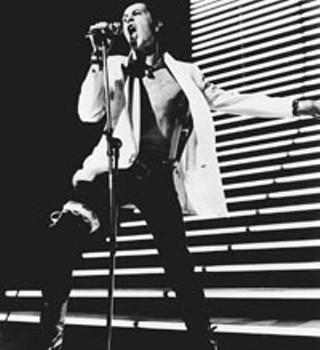 D: Alex Cox; with Gary Oldman, Chloe Webb, David Hayman, Courtney Love. In the audio commentary of Criterion's now out-of-print issue of Sid & Nancy (eBay, $50; Vulcan Video, $2), admittedly pompous "cultural historian" Greil Marcus marvels at the grittiness of Alex Cox's punk rock fairytale. By Trainspotting standards -- and, more recently, the punked-out amphetamine noir of The Salton Sea -- the sordid junkie degradation and deaths of Sex Pistols bassist Sid Vicious and girlfriend Nancy Spungen bleeds through with a tad too much MTV (pastels, light). With all due respect to the great Salton Val Kilmer and his Lizard Kingly turn in Oliver Stone's operatic Doors, however, few if any music biopics can top Gary Oldman in Sid & Nancy, though the said same actor as Beethoven in Immortal Beloved ranks high. Cox's co-original scripter, Abbe Wool, insists she watches Sid & Nancy's eerie final sequence, bathed in blue with a fog-encrusted World Trade Center playing backdrop, and wonders if that might not just be Sid Vicious up on the screen. Might as well be given another uncanny performance by the Shakespearean-trained Oldman. Chloe Webb, in her first role, keeps pace with Oldman's breakthrough portrayal, even if a bit part by real-life Yoko Ono-like rock mistress Courtney Love is deliciously surreal. That said, Sid & Nancy never tries to be The Great Rock & Roll Swindle or 2000's The Filth and the Fury, both critically acclaimed Sex Pistols docs by Julien Temple, who is also one of the Criterion laser disc/DVD pundits. In fact, Cox's now-classic mythos only catches gob after the Pistols implode an hour into it, and the film's namesake characters almost torch the Chelsea Hotel, where Spungen was murdered. The last 20 to 30 minutes especially, including Oldman's dead-on re-creation of Vicious' "My Way" video, are exquisite, Cox and his leads distilling pathos out of squalor. Joe Strummer's title song preserves the film's original title: "Love Kills."