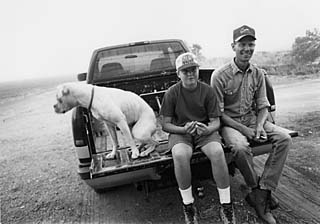 Larry Tannahill (with his son Brady) are the subjects of Larry v. Lockney, a documentary about Tannahill's fight against mandatory drug testing in high schools. The Texas Documentary Tour will present Larry v. Lockney on Wednesday, Jan. 15.

Lockney, Texas, is probably the last place you'd expect to find the ACLU's next anti-war-on-drugs champion. But there he was, in the spindly, unassuming frame of a farmer named Larry. That's Mr. Tannahill to those not on a first-name basis, though pretty much everyone is in Lockney, a town near Lubbock with a population that just barely tops 2,000.

After a drug bust nabbed 11 Lockney adults for cocaine, the Lockney Independent School District decided something needed to be done to discourage its students from using drugs. The solution? Mandatory drug testing for all students in sixth through 12th grade. Permission slips -- "voluntary consent forms" -- were sent home to parents; surprisingly, every parent in the district, save two, gave the OK for their kids to be carted off to the gymnasium to pee in a cup.

By trying to abstain from the drug testing, Larry and his wife weren't attempting to eliminate the program. Larry even says that if he'd suspected his two sons (the oldest of whom was 12 when the policy was instated), he would have supported drug testing for them. But he didn't have any reason to suspect his children and felt that if he'd agreed to the mandatory drug testing, that would have signified to his sons that he didn't trust them. Larry couldn't live with that, so he tried to opt out, and that's when things got ugly.

Mark Birnbaum and Jim Schermbeck's video doc, Larry v. Lockney, examines the legal battle that ensued, as well as providing a portrait of small town divided by, of all things, the Fourth Amendment. (Larry's lawyers argued that the blanket policy constituted unreasonable search and seizure.) The townsfolk speak candidly to the camera (sometimes uncomfortably so -- there's a lot of unchecked venom on display here toward Larry, who lost his job and his house in the process of fighting the town). There's also an unintentionally amusing moment at a heated school board meeting, at which Larry's lawyer tries to get in good with Lockney folks: "I'm not some guy with a big ponytail ... coming in here from Austin or even back East trying to tell you how to run things here." Later, we see Larry looking very uncomfortable at an Austin legalization rally: Unintentional comrade to hippies and champion to the ACLU, he just wanted his kids to know he trusted them.

Larry v. Lockney will be presented as part of the Texas Documentary Tour on Wednesday, Jan. 15, 7pm, at the Alamo Drafthouse Downtown, 409 Colorado. Filmmakers Mark Birnbaum and Jim Schermbeck will introduce the film and conduct a Q&A session following the screening. Tickets will go on sale at 6:15pm on the day of the show. Admission prices are $6 per show for the general public; $4 for AFS members, KLRU members, and students. The Texas Documentary Tour is a co-presentation of the Austin Film Society, the University of Texas RTF Dept., The Austin Chronicle, KLRU-TV, the SXSW Film Festival, and the Hotel San José.