The year in film

Tweet
print
write a letter
Top 10 lists are a dime a dozen this time of year. Everyone has one. And here we present several more.

However, instead of looking at these lists as our ultimate summary of the 2002 movie-going year, I suggest these lists be regarded as a transitory snapshot -- a captured moment in time. If you ask any of our film reviewers to resubmit his or her list next week, next month, next year, or next decade, it's likely you'll find modifications in each list presented below. Time and distance have not yet been fully factored into the love-hate equation. And when so many films are crammed into release during the last few weeks of the year, critics run from screening to screening with barely any time to come up for air -- much less rumination.

Complicating matters this year is that the 2002 holiday season has been packed with an abundance of riches. Almost all the movies released this holiday season are worthy of recommendation. It's an unusually good batch of films, and we regret not having more time to let them resonate and savor their differences.

Industry prognosticators bemoan the lack of unanimity among the various critics' groups offering year-end pronouncements in recent weeks. They whine about there being no clear front-runners or shoo-ins, no films certain to take home the big Hollywood prizes. But what's bad for the oddsmakers is great news for the consumers of movies. That so many films are in contention for favorites simply means that there are a lot of good movies out there to see. More than can fit in one list -- or four. So glean ideas from the lists presented here, but go out and make your own lists. I'll bet you'll find that 2002 is the year of My Big Fat Movie Geek celebration.

1. Far From Heaven 2. The Lord of the Rings: The Two Towers 3. About Schmidt 4. Secretary 5. The Pianist

1. About Schmidt From Easy Rider to About Schmidt, Jack Nicholson has blazed the solitary man's search for meaning in modern America.

2. The Lord of the Rings: The Two Towers

No movie this year made me feel so engulfed, so oblivious to any world but Middle-Earth.

It's little surprise that this Inuit epic looks like no movie you've seen before; it combines cultural specificity with universal appeal.

4. Lagaan: Once Upon a Time in India

This Bollywood crossover movie is a rousing tale about peasants beating the colonialists at their own game -- plus it has a love story, sports drama, singing, dancing, and intermission.

Exquisitely wrought, but out of time.

Hands down, the year's most audacious film -- a movie that wants to be about ideas.

A study of a famous Irish peace march turned deadly, told with documentarylike techniques that help elucidate how easily things can go from placards to paratroopers.

1. The Hours A seamless rendering of an unfilmable novel; Nicole Kidman's remarkable transformation into Virginia Woolf; art as life, life as art.

A superb Jack Nicholson, with a comb-over; the modern-day Babbitt befuddled by the American dream; the best ending of any film in 2002.

4. The Lord of the Rings: The Two Towers

A spectacular battle sequence; the unflinching vision of Peter Jackson; the ghostly Gollum, the embodiment of the ring's power.

The best road movie in years, bar none; the lusty recklessness of youth; a kiss that forever changes a friendship.

A poignant comedy about self-realization; Hugh Grant without the stammering; a big step up from the guys who brought us American Pie.

A Culkin kid who can act; Holden Caulfield redux; the rich and the privileged don't always have it better.

Shakespearean rants on race, progress, and family; a sunburned Edie Falco in an overlooked performance; John Sayles at his absolute best.

An unerringly objective look at the dark side of fame; set and art direction to die for; Greg Kinnear in a breakthrough role.

The agony and the ecstasy of the creative process; a stoned Meryl Streep imitating a dial tone; another postmodern collaboration of Jonze/Kaufman.

1. Far From Heaven Style and substance from the terrific Todd Haynes. I'm not sure a movie can get more gorgeous than this.

Adrien Brody's transformation from fêted concert pianist to Warsaw Ghetto fugitive is devastating; Roman Polanksi's return to form (and his homeland), cause for celebration.

Paul Greengrass' handheld vérité masterpiece dramatizes the 1972 Londonderry massacre with such nearness and authenticity, it's all you can do to keep from ducking for cover.

A chastised Adam Sandler whispers into his lover's ear, "I'm sorry I beat up the bathroom." Crazy-romantic, heartbreak-bleak, and all-around astonishing stuff.

Somebody should pants Harvey Weinstein for sitting on this adaptation of Graham Greene's novel for so long. Well-acted, well-directed, well-intentioned, and well-deserving of an audience.

Only this: Gotta sing, gotta dance.

Once more, Nicole Holofcener nails how girls walk and talk and wish they were prettier, skinnier, and more perfect.

Spiritual son to Benjamin Braddock and Holden Caulfied, Igby Slocumb is a 17-year-old snot -- privileged, punchy, and a real smart-aleck. Mr. Slocumb, are you trying to seduce me?

Almodóvar expands his universe to include men on the verge of a nervous breakdown in this lovely meditation on love incommunicado. Still don't know what to make of that giant model vagina, though.

Sure, it's uneven, but it's also -- dare we say it? -- Spike Lee's most mature, restrained work yet. Visually stunning, with the forward motion and commotion of a rumbly freight train headed straight for a brick wall. 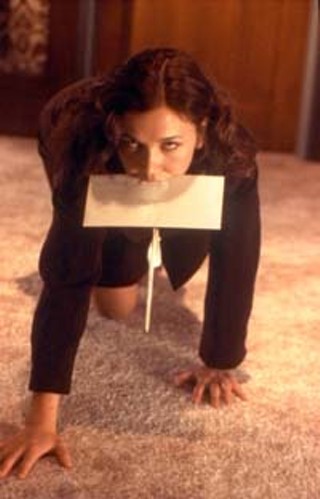 1. Secretary The best, sweetest, most romantic, endearing, and choke-on-your-Twizzlers-funny sadomasochistic love story the world has ever seen.

Art-directed clean out to its sprocket holes, this hyperreal Douglas Sirk homage restores the term "melodrama" to its status as a walloping compliment.

The single most wrenching (and at times subversively hilarious) film about loss I've seen in just shy of forever, with a plaintive Jim O'Rourke soundtrack to boot.

4. The Lord of the Rings: The Two Towers

Less a film than a lazy summer dream half-remembered at waking, Alfonso Cuarón's quirky and rhythmic meditation on sex, death, life, and the silken allure of perfect beaches is like a booster shot of eros.

Skate tough or go home (and make sure you film it all on grainy Super-8 while you're at it).

Charlie Kaufman demolishes the nature vs. nurture argument while ape-man Rhys Ifans gives Kong a run for his money in the too-horny-for-his-own-good department.

Deciphering the intricacies of an entire musical subculture in 92 minutes or fewer, courtesy of the great Doug Pray. 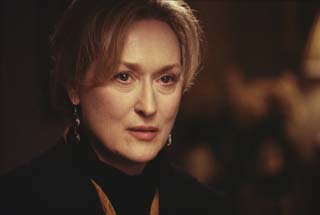 Todd Haynes (Far From Heaven), Peter Jackson (The Lord of the Rings: The Two Towers), Roman Polanski (The Pianist)

. Adam Sandler and Dana Carvey's movie doesn't even try to be good: It's a lame gimmick in search of a movie, plot mechanics be damned.

Kathy Bates (in About Schmidt & Love Liza): For making the movies safe for mothers-in-law by creating rich female characters, women of a certain age who are anything but stereotypical.

, The Believer, Signs, Insomnia, Confessions of a Dangerous Mind

Jack Nicholson (About Schmidt), Ryan Gosling (The Believer), Andy Serkis as Gollum/Sméagol (The Lord of the Rings: The Two Towers)

Stephen Daldry (The Hours), Todd Haynes (Far From Heaven), Peter Jackson (The Lord of the Rings: The Two Towers)

An Embarrassment of Riches: The holiday film season was the best Christmas present of them all.

The Sweetest Thing. Vulgar in every sense of the word -- and boring, to boot.

Don't Call It a Comeback: After the very public embarrassments of bad press, a flopped Talk, badhandling of Scorsese, and war-on-terror skittishness over The Quiet American's release, Miramax re-emerges with a dynamo year-end slate (The Quiet American, Chicago, Gangs of New York, Confessions of a Dangerous Mind).

New Best Friend. Far less pleasant than a Mouli-Grater-meets-manhood mishap, this excruciating exercise in laughable dialogue and excremental plotting was nearly "so bad it's good." Nearly.