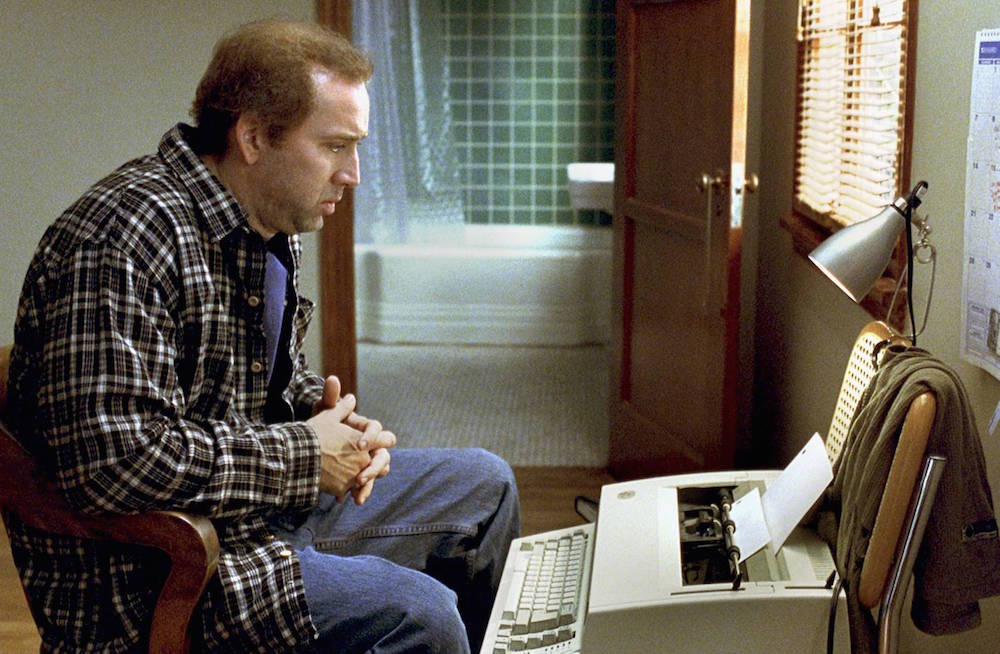 Adaptation is a movie of many internal monologues. It begins with one, in fact: a voice-over on a pitch-black screen during which the lead character, Charlie Kaufman (played by Nicolas Cage), unleashes a withering diatribe against ... himself. He is fat, he is bald, he is unsuave, he should really work out more. It's an unnerving, mordantly funny, minutes-long speech in which the insecurities of one Charlie Kaufman are laid bare. There will be many more of these run-on invectives to come. Later, Charlie, a screenwriter, sits across from a studio exec named Valerie (played by Tilda Swinton), who discusses an upcoming project with Charlie, an adaptation of a best-selling book called The Orchid Thief. Only Charlie isn't listening. Instead, he's off on another lacerating inner rant.

... She hates me. She's disappointed. I could see it in her eyes when we met. My leg hurts. I wonder if it's cancer. There's a bump. I'm starting to sweat. Stop sweating. I've got to stop sweating. Can she see it dripping down my forehead? Oh, she looked at my hairline. She thinks I'm bald. She's thinking, "I would never in a million years sleep with this guy."

We think you're great.

Mind you, not everybody thinks Kaufman's great; The New York Observer's Rex Reed recently referred to him as that "overrated gonzo writer." Possibly, but he has nonetheless provided recent cinema with some of its most indelible images (yes, and some of its weirder ones, too): a uterine-like portal into John Malkovich's brain (Being John Malkovich, for which he received an Oscar nomination); a couple of social malcontents covered in fur (Human Nature); and, the latest, Meryl Streep tripping balls on orchid dust (Adaptation). Overrated gonzo writer is just one of many theories on Charlie Kaufman: an original thinker and the most talented and audacious contemporary scriptwriter have also been floated as identifiers, as has one crazy sonovabitch.

Whichever it is -- if any, or all -- Kaufman isn't saying. He isn't saying much of anything, actually; when he does, it is only because he is in the direct line of fire from a roundtable of journalists, all of whom are itching to pick the brain of the man who picked the brain of John Malkovich to such sublime comic effect. Kaufman, who is neither fat nor bald, smiles a little nervously at some of the questions, does not make much eye contact, and often looks to his friend and director, Spike Jonze, for backup, possibly protection.

He might need some. Most of the journalists here are professional "junketeers," writers who hopscotch from L.A. to New York for weekends at four-star hotels and cushy roundtable talks with the "talent." There is one in particular, a seasoned pro with a laptop and a pushy way of making himself heard over others, who wants to know "what it all means." Kaufman isn't saying. Neither is Jonze, nor Meryl Streep.

"I'm not allowed to say," she laughs coyly. "I could feel [Charlie] stiffening every time that question would come. It's not easy entertainment. ... It's definitely a ride, but what it means, what it means to you, may be different than what it means to me."

Streep plays Susan Orlean, the journalist who first profiled John Laroche, a swaggering, no-front-teeth Florida orchid hunter, in The New Yorker, then turned his story into the best-selling nonfiction book The Orchid Thief in 1998. Kaufman was hired to turn Orlean's book into a straightforward adaptation of Orlean's journey south and her discovery of Laroche.

is a curious choice for adaptation. There are none of the elements typical to Hollywood cinema, like character arc, a love story, or tension, and certainly no thumping climax and conclusion. It is, as the fictional Charlie spews in frustration, "sprawling New Yorker shit." A tough sell, but the screenwriter was adamant that no Hollywood conventions be used to spice up the story: no car crashes, no heavy-handed self-discoveries, no deus ex machina. Those conventions do work their way into the final film, but that's the least of the surprises at hand. First, there is the fact that Charlie Kaufman inserts himself into the narrative; second, that he invents a happy-go-lucky twin brother named Donald, who is also a screenwriter, only the kind of screenwriter that Charlie is loathe to be -- conventional, well-versed in industry speak, and wildly profitable. Possibly, he is just another version of Charlie, the functional (fictional) Charlie that the real Charlie would like to be. Donald gets screen credit for Adaptation alongside Charlie (one wonders how exactly the filmmakers got the Writers Guild to OK that one): just one more kink in the film's dizzying Möbius strip of real, not real.

Kaufman didn't warn the studio execs of his change in focus -- an exceedingly benign method of describing the film's surreal acrobatics -- before he handed in the script. "I thought it was going to be the end of my career. And I'm not kidding. I was panicked about it."

Cage (who is Jonze's cousin-in-law, by way of the director's marriage to filmmaker Sofia Coppola) portrays both Charlie and Donald, quite the feat considering both the number of scenes the two characters share, as well as their diametrically opposed identities: Where Donald is giggly and at ease, a morose Charlie sweats bullets; where Donald is confident with the ladies, Charlie is a chronic masturbator. Kaufman described their initial script read-through, when Cage first publicly tackled the two characters.

"Nicolas was doing Charlie and Donald right against each other," Kaufman says. "It was just so subtle and beautifully delineated." Jonze also admired the actor's ability to flip-flop with ease between the two characters, but he noticed a difference in communicating with the two characters: When Cage played the goofball Donald, he was easygoing; when he played Charlie, with his nervous tics and impossibly bleak outlook on life, the actor was more "irritable" to direct. It's important to note, however, that Cage's Charlie is not a replica of the real man. (The real Charlie has quite a lot of hair.) Cage met with Kaufman several times and recorded the conversations, but the writer says that Cage was "very respectful. I knew he was observing me, but it didn't feel like he was observing me."

None of the other actors met with their real-life counterparts. Streep explained why she didn't feel an obligation to consult with Orlean: "It wasn't a documentary about her -- it wasn't really about her. It wasn't remotely about her. I've played real people, and you feel a certain responsibility. I met Charlie Kaufman, and I know Nic Cage, and that is not typecasting. I figured I had complete free rein."

Chris Cooper, a formidable character actor who has appeared in American Beauty and Lone Star, had perhaps the toughest assignment: portraying Laroche, a chain-smoking, cocksure cowboy of sorts searching the Florida swamplands for the elusive ghost orchid. Cooper also shied away from meeting Laroche, though he did have about five hours of videotape to work from, just enough for the actor to capture "his cadence and all that. But I had to make this character much bigger. It might have been an injustice if I had tried to create a mirror image."

It also might have been a mite deceptive: There is a point in the film where the adaptation ends and Kaufman's own imaginative universe take over. The two stories -- of Orlean and Laroche and of Charlie and Donald -- meet up in a bewildering third act (call it metafaction, maybe), at which juncture the film takes a nosedive into the sensational Hollywood mores the fictional Charlie professes to abhor: car crashes, self-discoveries, and one hell of a deus ex machina. It's a head-scratcher, to be sure -- is it a knowing wink from the screenwriter or his last-ditch, get-me-outta-here effort to wrap up loose ends? And what of all the doubles, doppelgängers, and red herrings, the ways in which fact and fiction commingle and confuse, and the twin themes of adaptation -- adaptation as the translation of one work into another and adaptation as evolution -- a conceit that sparks some of the film's most dazzling imagery, a stop-motion Cliff's Notes on the history of the universe. Dear God, what does it all mean?

Kaufman isn't saying. Neither is Jonze, nor is Streep. But Cooper boldly takes a stab at it. "Maybe it's a study of -- it's not high concept, but it's kind of what got me interested in the business when I was growing up." He starts over, choosing his words more methodically this time. "It's a study of human nature ... of obsessions or passions or whatever." One more try. "I think it's a hilarious, absurd, touching, sensitive little study of people ... "

He trails off. Some things, quite obviously, cannot be explained.