Of Antidotes and Elixirs

Jean Cocteau's 'Beauty and the Beast' 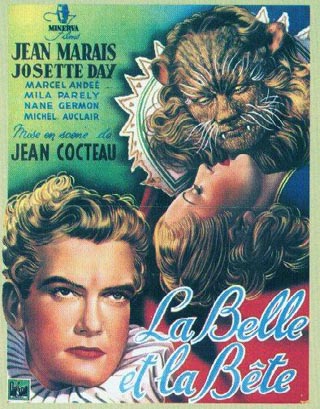 Cocteau once said that "A film is a petrified fountain of thought." The Dobie invites you to lap from that fountain when it screens Beauty and the Beast, beginning Dec. 20.

French filmmaker and author Jean Cocteau once said, "Victor Hugo was a madman who thought he was Victor Hugo." The same might be applied to Cocteau: Was Jean Cocteau a madman who thought he was Jean Cocteau? It's an idea that might help viewers approaching 1946's Beauty and the Beast, his surrealistic fairy tale adaptation. Cocteau's madness infects Austin when a freshly minted 35mm print of Beauty and the Beast begins a limited run at the Dobie Theatre on Dec. 20.

Cocteau, an autodidactical polymath who dabbled in numerous media (to name a few: poetry, choreography, ceramics, and, allegedly, secret societies), is best known outside of French borders as an avant-garde filmmaker who directed a handful of films beginning with The Blood of the Poet in 1930 and ending with The Testament of Orpheus in 1960. Truffaut cited him as an influence on the French New Wave, and Cocteau was also considered to be among the first "indie" filmmakers. Beauty and the Beast was first conceived when Jean Marais, the distinguished French actor discovered by Cocteau, pitched the fairy tale idea to his mentor, who subsequently jumped on it as an artistic antidote to the horrors of World War II. Cocteau cast the French actress Josette Day as Beauty (a part she clearly had no trouble playing) and dressed her up as a dead ringer for the Vermeer painting Girl With a Pearl Earring (minus the pearl earring). Marais, who was seen by American audiences in his last film Stealing Beauty in 1996, scored the coup of playing the Beast, under a make-up job that took six hours to apply. More than 50 years later, it still looks like it could give Rick Baker a run for his money.

While utilizing a number of highly stylized gestures (including a stilted monster walk that seems to be lifted from the silent German film), Marais also managed to use his eyes to convey tragic depths of emotion. When he tells Beauty never to look directly into his eyes (a command that she doesn't obey), he seems to be acknowledging, in an offhand fashion, one of the major focal points of his performance. Yet Marais went even further. When a scene called for him to slurp from a dangerously polluted pool of water, he did so without recourse to a stunt double or special effects.

The manic intensity of Marais' Beast may have been connected to Cocteau's own sense of beastliness. According to Arthur King Peters' Jean Cocteau and His World, "During the shooting the poet [Cocteau] suffered from jaundice and eczema so disfiguring that he wore a black veil eye-slitted and fastened to his hat with clothespins." Cocteau was clearly intent on transporting the viewer to a parallel universe where the fantastical is commonplace: Candelabras are held by human hands extended from walls, doors open and close by themselves, teardrops become diamonds, mirrors are magical, and animated statues (first seen in The Blood of the Poet) serve as a visual chorus to the action of the story. Cocteau's penchant for reverse action and slow-motion trick cinematography may seem quaint in our digital age, but they reflect the sensibility of an artist who saw dreams as being of equal, if not more, importance than the realm of the so-called everyday world. Beauty and the Beast may be the work of a madman who thought he was Jean Cocteau, but if Cocteau's madness could be bottled and sold as an elixir, then send me a case of it, pronto. 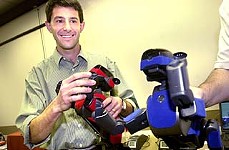 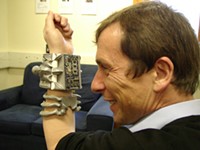