If the point is to see if Miss Swank can act in a dress, the jury's still out. Otherwise, this historical drama is just shy of fabulous. 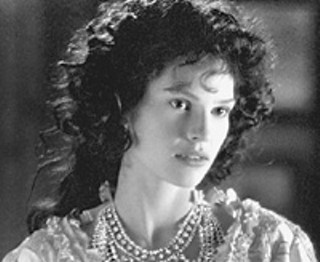 A famous tale of intrigue and scandal, one that lent fiery fuel to Marie Antoinette's bad reputation (which in turn led to her beheading), this historical drama recounts the story of Countess Jeanne St. Remy Valois, played by Hilary Swank (in her first role after winning an Oscar for Boys Don't Cry). After the countess sees her father murdered and their property taken from them, she wishes to avenge the wrong done to them. Begging for an audience with the queen (Joely Richardson is fabulous as Marie Antoinette), the countess is rebuffed. Meanwhile, the queen's jewelers have designed a magnificent diamond necklace, but the queen does not purchase it (despite coveting it), leaving the jewelers in a tight spot. The countess forms an alliance with Cardinal de Rohan (played magnificently by Jonathan Pryce), who is out of favor with the queen, and convinces him to buy the necklace in order to smooth things over with the queen. Of course, the scheming countess plans on stealing the necklace so that she may live happily ever after. As the details of the many deceptions begin to see the light of day, the reputations of all involved suffer (especially that of Louis XVI and Marie Antoinette). Director Charles Shyer has written, directed, or produced many fine comedies, such as Private Benjamin, Irreconcilable Differences, Father of the Bride, and The Parent Trap, but historical drama is not his strongest suit, and his leading lady is the weakest link in the equation. Passionless and wooden, Swank is simply not skilled enough to handle the role. Fortunately, there are many scenes without her that sizzle with drama, and the supporting cast, cinematography, costumes, and art direction are superb and engaging.