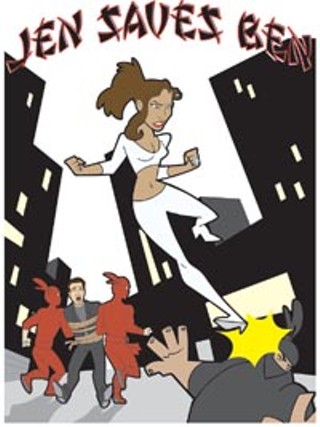 Talk about a hella-cool pre-wedding gift: Director Kevin Smith recently gave Hollywood über-couple and stars of his forthcoming film Jersey Girl Jennifer Lopez and Ben Affleck their own personal video game kiosk. And not just any video game, either, but one featuring J.Lo and Affleck themselves, created entirely by Austin's Powerhouse Animation Studios. The game, called Jen Saves Ben, features a kickboxing Lopez battling killer ninjas (and the portly-yet-evil Smith) who have kidnapped the bootylicious one's betrothed in an attempt to ruin the pending nuptials.

"We did a short cartoon called 'Heroes' that was a parody of Kevin Smith's animated series," explains Powerhouse Director of Operations Brad Graeber, who, along with co-founders Frank Gabriel and Bruce Tinnin, heads up the studio. "[Smith] saw it and dug it and called us up looking for a way to do something along those lines for his Jay and Silent Bob's Secret Stash comic book store."

From there it was only a bif! bang! pow! to the creation of the celebrity-specific arcade game, a free-standing, old-school-styled monster with joysticks and levels galore. Graeber and company then drove the game all the way to the Jersey Girl set, where Affleck and Lopez "played the game all the way through before going back to shooting."

And the best part? You don't need to scrounge two bits every time you play it. Graeber says Powerhouse is open to creating similar arcade games for anyone with "$10,000-$16,000" to throw down, although less costly games can also be tailored to prospective customers' specifications. Check out the gang online at www.powerhouseanimation.com.