Doris Day, the Sixties' most popular professional virgin, croons over the opening credits that "there must be a pillow-talkin' boy for me." Boy, was there ever, and his name was Rock Hudson. 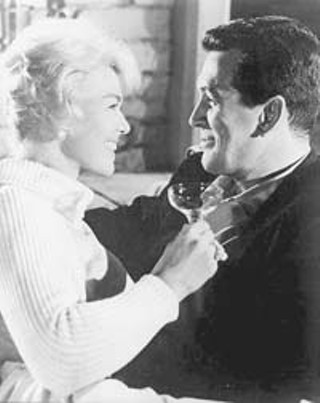 Doris Day, the Sixties' most popular professional virgin, croons over the opening credits that "there must be a pillow-talkin' boy for me." Boy, is there ever, but he isn't the boy she thinks he is. An interior decorator with a vice grip on her virtue, Day's Jan Mitchell falls for a Texas oil man named Rex Stetson (Hudson). Only Rex is actually Broadway composer Brad Allen -- and the bane of Jan's existence. The two, unseen to one another, share a party line -- too many Manhattanites, too few private lives -- so the two must split time on the phone. Ladies' man Brad monopolizes the line, wooing his many admirers day and night. Jan overhears Brad sing a new song for a girlfriend, telling her he wrote it just for her; minutes later, he's singing the same song, only in French, to his Parisian girlfriend: See, he wrote it just for her, too. Party to his deviousness and general scalawaggery, Jan gives him a piece of her mind; Brad resolves to teach her a lesson; and Rex is born, with the sole directive of getting into Jan's pants. He's much more gentlemanly about it, of course; so gentlemanly, in fact, that Jan begins to worry that Rex is batting for the other team, one of "some men who are very devoted to their mother." (The bittersweet twist is that the closeted actor did bat for the other team; Hudson would be one of the first celebrity casualties of AIDS in the Eighties.) Thelma Ritter (the sassy masseuse in Rear Window) is mordantly funny here as Jan's maid, who wavers between two states -- drunk, and getting over being drunk (which, presumably, entails getting drunk again), and Randall is his usual lovably schlubby self as Jan's sometimes-boyfriend (he would re-team with Hudson and Day -- third wheel twice more -- in Lover Come Back and Send Me No Flowers). Hudson and Day were lifelong friends, and this first collaboration of theirs would be followed by three more romantic comedies, but this is the only one centered, rather startlingly, around popping prim Doris' cherry. In these more, er, enlightened times, Day's cinched-tight chastity belt routine plays rather shrilly, but Hudson was a smoothie who knew exactly how to get a rise and a smile from his frequent co-star. In short, the perfect pillow-talkin' boy for her.