Fassbinder's grimy Berliner sensibility coats the bare bones of Sirk's original tale in a slick sheen of weary cynicism and pits true love against societal mores in a battle to the bitter end. 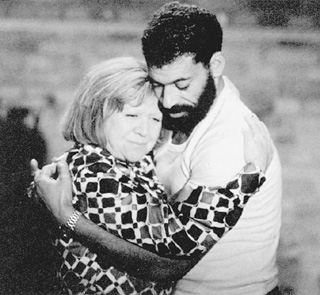 D: Rainer Werner Fassbinder; with Brigitte Mira, El Hedi ben Salem, Barbara Valentin, Irm Hermann. That German merchant-in-angst Fassbinder could successfully remake Douglas Sirk's 1955 über-melodrama, All That Heaven Allows, proved once and for all that the universe has a sense of humor, warped though it may be. Fassbinder's grimy Berliner sensibility coats the bare bones of Sirk's tale in a slick sheen of weary cynicism and pits true love against societal mores in a battle to the bitter end. Emmi (Mira), a plain, middle-aged cleaning woman, falls for Ali (Salem), a Moroccan mechanic 20 years her junior. Predictably, Emmi's adult children loathe the dark-skinned foreigner, and as enmity from the community springs up on all sides, the unlikely couple find themselves bonding in the forge of the surrounding resentment. Waiters, grocers, neighbors, and virtually everyone else in Fassbinder's film are presented as gossiping, racist dullards, and when the couple finally ties the knot, Emmi's son explodes and beats a television to death with the kind of steadfast Teutonic rage that makes your skin crawl. Although Sirk's original has recently been (loosely) remade again by Todd Haynes as Far From Heaven (which opens in Austin this week), Fassbinder's version is the thematically purest of the three (and one of his most accessible films). More ironic than Sirk and less precise than Haynes, Ali's examination of the love that dare not speak its name communicates instead in frantic whisperings and in the shouting of uncomfortable truths and jaded revelations that end up giving just about any love a bad name.