Todd Haynes resurrects the gloriously overwrought weepies of the Fifties 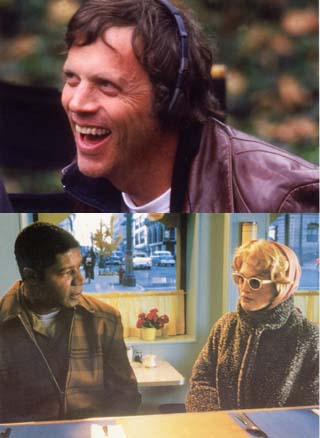 Filmmaker Todd Haynes (top) has generated much Oscar buzz with his latest effort Far From Heaven (bottom), a re-creation of women's pictures popular in the Fifties.

We only have 15 minutes, so I have to move fast.

Why do you make movies, and why did you make this movie?

Todd Haynes laughs a little, but not much. He's had these kind of ludicrously open-ended questions lobbed at him for weeks now. He's making the rounds, making time for these 15-minute phone calls while on a promotional tour for his new film, Far From Heaven. But even though it's at the end of a long day, at the end of a long tour (Haynes will head home to Portland shortly after our talk), he still gives the question some serious thought.

"Why do I make movies? That's been a question for me, actually. In between Velvet Goldmine [his 1998 ode to glam rock] and this experience, that was a big question." He laughs, re-enacting his own thought process: "'Why do I make fucking movies?'"

It's rare to find a filmmaker willing to voice -- at least publicly -- private misgivings about his profession, but then, Haynes' career is equally as uncommon. A graduate of Brown University, he first made waves in 1987 with Superstar: The Karen Carpenter Story, a lo-fi biopic about the anorexic singer ... starring Barbie dolls. That casting decision could have been just a gimmick, a young filmmaker's calling card. ("Todd Haynes? Y'know, the Barbie dude.") Instead, Superstar is a sympathetic, strangely affecting portrait of the singer's decay. (The Carpenter estate demanded the film be pulled from circulation, but copies still crop up in film schools and independent video stores.) His first live-flesh feature, Poison, won the 1991 Grand Jury Prize at Sundance, prompting splashy headlines like The New York Times' "Gay Film Wins Top Prize at Sundance Festival." Later came Safe, a study of environmental illness and social isolation (and his first collaboration with Far From Heaven star Julianne Moore) in 1995, followed by Velvet Goldmine three years later. His first post-Heaven project is to be "a completely refracted biography film" about Bob Dylan, for which he has received the singer-songwriter's blessing. But in between came that crucial point of self-reflection. To recap: "'Why do I make fucking movies?'"

"I'm very proud of the films I've made and the effect they've had on the people who've found their way to them," Haynes explains. "But I needed to find a better way to balance that with a life that wasn't completely defined by the sort of privilege and arrogance of filmmaking. You've gotta appreciate the ridiculousness of film, I think, to really do it well and to get through it. To not just take it all so intensely seriously all the time. It was helpful to leave New York and really exhilarating to rediscover things in myself in a new place."

That new place was Portland, Ore., where Haynes sat down to write the script for Far From Heaven. His latest effort might be accused of gimmickry, too: It's an exacting re-creation of the gloriously overwrought melodramas of the Fifties -- women's pictures, or "weepies." German-born Douglas Sirk is the uncontested master of the genre, his impressive catalog including titles like All That Heaven Allows and Imitation of Life. They are portraits of Fifties suburbia, where the lawns are immaculate, the houses split-level and gleaming, its inhabitants the prototypical nuclear family, with tension and tumult bubbling just under the surface.

Far From Heaven snatches strains of plot from those films. Julianne Moore's housewife, Cathy Whitaker, falls for the gardener (played by 24's Dennis Haysbert) -- a theme lifted straight from All That Heaven Allows. Only this gardener doesn't look like Rock Hudson: He is black, and Cathy's husband, played by Dennis Quaid, is a closeted gay man in therapy to lick the pesky "problem" of his sexuality.

The film labors, albeit discreetly, to mimic the look, the sound, the sense and sensibility of a melodrama: an elaborate process that involved very specific research and an exhaustive attention to detail. The film isn't just in the details -- it's all about the details. In particular, color is key to establishing the mood, evoked in the blue hue of a gay pickup bar and the brilliant autumnal reds in the front-yard leaves and Cathy's lipstick. The cue, as ever, came from the weepies.

"There's such a sophisticated and complex palette of colors that you'll find in films from this period that you don't see anything close to in movies today. That was an exciting invitation to really rise to the occasion. All the main creative departments -- Sandy [Powell], costumes; Mark [Friedberg], design; and Ed [Lachman], the director of photography -- would sit for days and talk color."

The task of re-creating the period-specific dialogue, in which a little boy's "aw, shucks" is enough to get a rise out of mom, was just as formidable. During the casting process, extras would come in to read Haynes' script, some tackling the stylized dialogue with a naturalistic approach, making the words sound, according to Haynes, "so absurd."

"The more you try to make it sound real, the more fake it sound[s]. ... [The words] are very clean and very direct without a lot of fuss and layers. The thing about these characters," Haynes continues, "is that they don't really plumb the depths of their souls and articulate what's beneath the surface. They're almost mute about what they learn. They don't report their discoveries in the sort of classic arc tradition we see so much in the movies. And it's hard. It's a challenge."

Suffice it to say the filmmakers rose to the challenge, and all for a paltry $14 million -- chump change compared to what a studio-mounted attempt at the like would have cost. Not so much an imitation of life as an imitation of what life looked like in a swooning Sirk picture, Far From Heaven is flawless in its parade of starched shirts, flouncy skirts, and pretty-colored cocktails always in hand, coupled with period filmmaking mores of dissolves, dialogue just shy of stilted, and a score, by Elmer Bernstein, that begs for three hankies (embroidered, of course). But the question remains, why make this movie?

"I made [it] because I care a lot about these kind of movies, and I felt like they might be a way to re-infuse this cynical moment we're in with some sort of surprising emotional feeling, [a feeling] that I think people are suspicious about in general. Maybe it would take resurrecting it from a place that is so discredited -- the maternal melodrama. I don't know. I don't know how much I thought about this in advance. I just know I was after an emotional result."

He got it. The truly marvelous accomplishment of Far From Heaven is how quickly it stops feeling like a neat stylistic experiment and starts feeling like a full-blooded, emotionally involving narrative. It isn't half-cocked, and it isn't camp. It's alarmingly unironic, which may be attributed to what Haynes calls the overwhelming "compassion" and "respect" the cast and crew brought to the project. But audiences needn't have respect -- or even awareness -- of the film's family tree. Far From Heaven connects with or without prior knowledge of the genre.

"I think what's so interesting is people who might be in the know, or who feel really, really prepared for a movie like this, say 'I just want to take my mom to it.' And when do you say that about a movie that is supposedly an art film or is full of hifalutin references to classic Hollywood? I love that."

Ultimately, all the jumping through hoops may be put aside. Far From Heaven connects not because of its fedoras or vintage Fords, but because of the irrepressible humanity at its core.

"Because it's really basic human stuff that it's about, that really hasn't gone away," Haynes says. "It's just the way people trapped in rigid societies behave. And we're still in one. In fact, it's getting more rigid by the hour."

Far From Heaven spins on two issues -- interracial romance and homosexuality -- that could never have been addressed in a movie made at the halfway mark of the century. Haynes briefly considered placing the film in a contemporary setting (German director Rainer Werner Fassbinder did as much with his All That Heaven Allows remake, Ali: Fear Eats the Soul), but the director ultimately decided that it's "almost easier to see where we are from a little distance." Because the film is very much about where we are today. Far From Heaven limns the parallels between the intolerance and unbending social structures of 1952 and the intolerance and unbending social structures of 2002. There is a danger, of course, that audiences will presume that because the film is set in the Fifties, the issues it addresses are as buried as that bygone era, no longer problems in our "enlightened" present tense.

"Of course I [worried] people would allow the myth of the Fifties to keep redeeming our so-called movements forward. But what's so amazing with the press is even the most absolute mainstream, glib, sound-bite press are not saying that about this movie. They're really making that direct connection and questioning how far we've really come."

How far? Haynes has already supplied the answer.

Far From Heaven opens in theatres on Friday. See "Film Listings" for review.