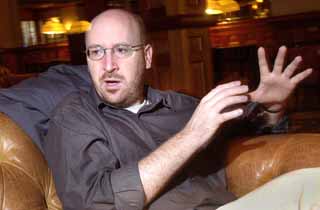 Writer/director Dylan Kidd chatted it up at the Driskill Hotel last month, in between his panels at the Heart of Film Screenwriters Conference and the regional premiere of his debut, Roger Dodger. (Photo By John Anderson)

New York-based writer/director Dylan Kidd doesn't look like the hard-bitten, cynical bastard his debut feature, Roger Dodger, might suggest. The film follows scheming, misogynistic raconteur-cum-advertising executive Roger (Campbell Scott) around Manhattan one evening as he tries to clue in his 16-year-old nephew Nick (Jesse Eisenberg, older brother to precocious Hallie Kate) to the vagaries of the feminine mystique. Kidd, decidedly un-rat bastard-like, instead comes across as the capable 30-year-old writer/director he is. There's nary a spark of malice in his quiet conversational cadence: The nastiness is all up on the screen.

Kidd's debut, which took home the Best Narrative Feature Award at the inaugural Tribeca Film Festival last May, is an astonishingly well-written and well-directed piece of indie filmmaking. It's the sort of film guaranteed to spark heated, post-theatre debates (and possibly a bitchslap or two) and which recalls Neil LaBute's scary, testosterone rantings in Your Friends and Neighbors and David Burton Morris' little-seen male overloader Patti Rocks. Toss in a handful of megawatt talent (Isabella Rossellini, Jennifer Beals) as the film's feminine foils, and the result is a small-scale smash that tosses the burdensome male mindset on its well-coiffed head. This Roger is spiritual kin to American Psycho's preening Patrick Bateman, but in lieu of a chainsaw, he dismembers the female psyche with his (alleged) intellect and a sense of proprietary self that borders on the sociopathic.

We spoke with Kidd during his recent trip to town for the Austin Film Festival, where he spoke at the screenwriting conference as well as presented his film at the Paramount.

Austin Chronicle: How many scripts had you written before you did Roger Dodger?

Dylan Kidd: I had completed two other scripts, but they were both way too unwieldy to shoot. I'm a writer/director: I'm writing because I want to make these movies. So when I started this one I very consciously looked at it as almost an exercise in keeping it real, in terms of locations, only having four or five main characters, keeping it dialogue-driven, keeping the time frame within one night -- that sort of thing. I thought, "You've got to be able to do this on DV for $40,000."

AC: But the film wasn't actually shot on digital, was it?

DK: No, it was shot on 35mm, but the cinematographer, Joaquín Baca-Asay, who was an old friend of mine, did a lot of work to make these big, unwieldy 35mm cameras feel very intimate. We had this elaborate bungee-cord rig that allowed us to do hand-held by taking some of the weight and so forth. Those cameras with the film magazines on them weigh in at 60 pounds or more, so it was a challenge. But I really love the look of the film -- it almost looks like it could have been shot with much smaller cameras. But it wasn't.

AC: For a first-time indie director, you sure managed to secure an amazing group of actors. Was it at all daunting for you to be the one unproven guy in the midst of people like Isabella Rossellini and Campbell Scott? 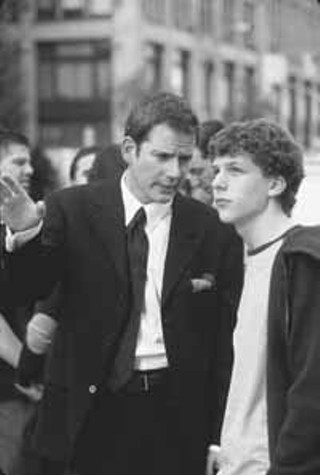 DK: Amazingly it was almost the perfect shoot. It's a little boring to talk about in interviews, because everything went so well. We were spoiled because everybody was so down for the cause. I think it really came down to the fact that Campbell Scott was the first person on board, and then he was instrumental in helping to line everybody else up. At one of our first meetings I told him, "Look, I really need you to help me bring some other people to the project," and so he would sort of guide my casting ideas a little bit. As far as, say, Isabella, we knew that she obviously didn't need to prove anything to anybody, so why not? Without Campbell's early help and unwavering belief in the project, I don't know whether it would have been done, though. It wouldn't have been the same film, certainly.

AC: So let me get this straight: You're fresh out of NYU film school, you've got this terrific script under your belt, and then you run into Campbell Scott in a Manhattan coffee shop and pitch it to him on the spot, right? That's hardly standard operating procedure, is it?

DK: Rule No. 1: Don't be psychotic. Be very, very deferential and polite and quick. I think our whole exchange took maybe 30 seconds, tops. He was with this beautiful woman, and I knew I was interrupting, it was an intense talk, and I was like, "I have this script and you'd be perfect for the lead role" -- I think it's very important, also, to say "the lead role" when approaching potential actors for your film because they like to hear those words as much as possible -- but he ended up saying "Sure," and that was it, really.

AC: Can you describe how you approach the writing process? And what was the germ idea for this particular script?

DK: I think you have to take responsibility for every character you write. I don't think I'm anything like the character of Roger, but sometimes it can be fun -- or even cathartic -- to slip on a different persona when you're writing. I think what was fun about writing this horrible guy was that he doesn't have any of the things that are holding most of us back in terms of "Well, I can't say this because I'm going to lose my job," or "I can't say this because I'll piss this person off." I mean, this guy has no filter. At all. And that was tremendous fun to write.

I guess I started with the character, and I knew at that point that I really wanted to do a dialogue-driven film, and so I knew that I had to come up with a character to do most of the driving. I can remember that I was thinking in terms of Mike Leigh's film Naked a lot. If a character is charismatic enough and what they're saying [is] interesting enough, you'll follow them through pretty much anything. I'm not comparing my film to Naked at all, but I held up Leigh's film as an example that you could write a character who's not likable, but you can make a character that's so compelling it's like watching a car wreck.

AC: The character of Roger isn't the only compelling one in the script, and in fact, the three female characters that he interacts with -- played by Rossellini, Elizabeth Berkley, and Jennifer Beals -- are all tremendously believable. I'm curious what mental leaps you had to make to jump from writing this misogynistic, sleazy guy to writing the women's parts? Was that a difficult transition for you to make?

DK: I have to say that one thing that I can't stand about my writing is that -- to me -- everybody kind of sounds the same. It's great that you say that, but when I watch the movie I have that insecurity that makes me think everybody's kind of being witty in the same way, you know? I'm lucky in that I have a lot of really great female friends. I grew up as an only child, but I have a lot of really strong women in my life, socially, in New York, and so I was able to draw on that. And then my father is remarried, and I have a brother who is the same age as the character of Nick [Jesse Eisenberg], which is 16, so I was able to draw on that as well. The interesting thing about having a 16-year-old brother is you realize that even though this kid is out all night, IM-ing, and there's this huge technological generation gap that now happens every four years because the culture is so accelerated, when you're 16, it's still all about sex. And it's good to know that some things never change. These kids are out in cyberspace but they're still agonizing over how to talk to girls all the time.

AC: Now that you've mastered the fine art of the small, dialogue-driven indie picture, are you going to stick with that, or are you going to take the Doug Liman/Bryan Singer route to major Hollywood megabuck productions?

DK: I really have no desire to do that, but it would be inviting disaster to be cocky enough to say, "This is what I want to do," because basically, I just want to make another movie. Definitely this movie has exceeded every expectation I ever had. Anne Chaisson, my producing partner, and I want to stay on the East Coast and continue to do small-budgeted films with name actors. I feel that's a good formula for investors, and it's also a good way to keep people off your back. When we made this movie the budget was so small and the cast was so big that the investors knew that even if I totally dropped the ball they'd be making their money back and then some. I have a huge admiration for Doug Liman and Darren Aronofsky and James Mangold and all those guys who make the leap from indies to majors, but I know, for me, I'm too thin-skinned to operate in a system where you have to make the creative sacrifices that those big films often entail.

What's great about working in small indie films, and what I've come to understand on Roger is that, at this budget level, the way that you realize your responsibility to the investors is simply to make the best movie you can. They dovetail, and you don't have to worry about it. I think that when you're Doug Liman and you're working in the studio system, your responsibility to the parent company or to the studio doesn't always jibe with what's best for the movie. And I don't know how I would deal with that.

For now, I'm not going anywhere. I can't even drive a car.