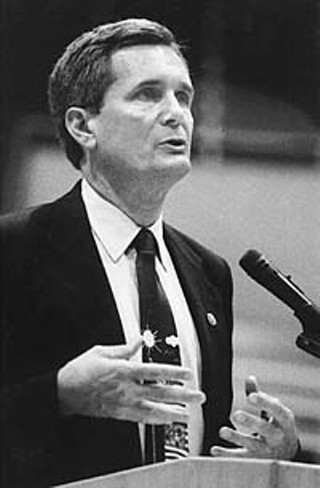 Be a proactive TV watcher, not a passive one: Write Rep. Lloyd Doggett about preserving media-ownership limits. (Photo By John Anderson)

Let's face it: Most of us turn on the tube, sit there, and veg out. Some of us try to pay attention more astutely, but when the sofa gets all warm and comfy, the remote is at your fingertips, and there are no distractions, morphing into a couch potato is as easy as tuning into a reality show. Passive TV viewing seems like a harmless guilty pleasure. What's not so harmless are the machinations going on under our noses that could have a profound effect on how TV is made and how we watch it.

With the blessing of Bush appointee Michael Powell, the Federal Communications Commission is in the process of defanging several long-standing rules meant to guarantee the integrity of U.S. media. These rules center around ownership limits, originally enacted to ensure that the airwaves are not controlled by a few. Under current guidelines, one company cannot own a daily newspaper and a broadcast TV station in the same city. There are limits on the number of radio and TV stations a company can own in a city and limits on the number of TV stations a single company can own. Collectively, the stations cannot reach over 35% of all households in a given area. Nationally, none of the big four networks -- ABC, CBS, NBC, and FOX -- can buy another major network.

While the dismantling of these regulations may seem to be of little consequence to ordinary viewers, the result could be deeply disturbing. It could mean that even fewer people and companies control a vast amount of airtime for profit -- and not necessarily for the common good. When the bottom line is the leading factor -- or only factor -- in deciding what goes on the air, the airwaves become a lost resource for the exchange of ideas and information from a diverse range of sources. In other words, freedom of the press should not be "guaranteed to those who own one," as A.J. Liebling puts it in Jeff Chester's article "A 12-Step Program for Media Democracy" (The Nation, July 2002). With the collapse of media into a handful of conglomerates, there has already been a cinching-in of a number of ideas. This fact is made invisible when TV is regarded as the "boob tube" or "idiot box" and not for what it is: the most pervasive and powerful medium available. Of course, this doesn't include the Internet -- and don't think that frontier hasn't been scoped out by media moguls who hope to tame it to meet their needs.

So, what is an ordinary citizen to do? Don't take the medium for granted. The Center for Digital Democracy has a thorough and thought-provoking set of questions all citizens interested in maintaining an open source for information could consider, along with a link to officially state your concerns directly to the FCC. Visit their site at www.democraticmedia.org/mediaownership . To voice your concerns by snail mail, write to: Federal Communications Commission, 445 12th Street SW, Washington, D.C. 20554. Reference docket #02-277. And while you're at it, drop a line to your congressman. For the 10th Congressional District, that's Lloyd Doggett, doggett@hr.house.gov. By snail mail: Lloyd Doggett, 10th Congressional District, 126 CHOB, Washington, D.C. 20515.

Get your groove on and get on TV, too. The Austin Latino Music Alliance (ALMA) in conjunction with the Austin Music Network is shooting another episode for the locally produced Sonidos de Barrio series on Thursday, Nov. 14. Teye & Viva el Flamenco, Del Castillo, and Ghandaia are the featured performers. Show starts at 8pm at Steamboat (Congress and Riverside). Admission is $7 in advance (what, you thought this was Bandstand?), $10 at the door. Call 443-3037 for tickets... The diva cam on Liza Minnelli and her tonsil-sucking husband David Gest, set to be the stars of a VH1 reality series, is no more. Gest's micromanaging made VH1 call it quits. If only the same would happen to The Anna Nicole Show on E! It's been renewed for a second season... For a better taste of reality sitcoms, you must see The Osbournes, which returns for a second season Nov. 26 on MTV. To prime viewers for what's to come, the music network is airing Catching Up With the Osbournes, a trip through last year's season... Come and gone: New York hip-hop artist and radio personality Angie Martinez, hired to be the fourth American Idol judge, up and quit. Whether a new judge will be hired to fill her slot is unknown at press time... Rumors are swirling that this may be the final season for Buffy the Vampire Slayer (UPN). Rumors are also swirling that the show could continue with sister Dawn in a pronounced role and that the deliciously evil Faith will return to make things difficult for her. While creator Joss Whedon has confirmed that Faith will return for this season's last five episodes, it's not confirmed what will happen in the next. None of the cast have signed new contracts for season eight or beyond. My thoughts? One word: cremation. None of this back-from-the-dead business.