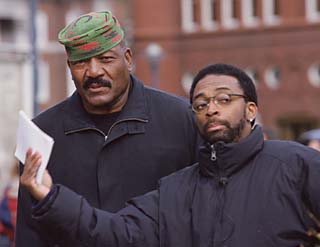 Jim Brown and Spike Lee will present Jim Brown: All-American at the Westgate on Nov. 5.

Spike Lee makes the most of his time. He's speaking with me by phone as he travels to the airport. Lee is going to be in Austin on Nov. 5 to present his new documentary, Jim Brown: All-American. He will be accompanied by the legend himself, Jim Brown.

We all know Spike Lee is a sports nut, so this movie about the NFL running back whom he regards as the "greatest football player ever" comes as little surprise. What is striking, though, is the extent to which Lee explores Brown's life and its ramifications away from the playing field. After all, Brown's pro ball career lasted only nine years (1957-65) -- an amount of time that makes the rushing record he set all that much more impressive.

Lee is interested in Brown as a multifaceted individual: as the actor and film icon who paved the way for the virile African-American action stars of the future, as the football player who quit at the top of his game, as a social activist and proponent of black economic solidarity who helped found such self-help organizations as the Negro Industrial and Economic Union in 1957 and Amer-I-Can in the late Eighties, and as a figure of controversy in charges (despite no convictions) of physical and sexual assault by several different women -- and some men.

In the course of the documentary Lee visits Brown's birthplace of St. Simon's Island, an all-black community off the coast of Georgia, and goes to Germany to interview Eva Bohn-Chin, who accused Brown of throwing her over a balcony (although she later dropped the charges). Lee makes great use of archival footage of Jim Brown's high school, college, and pro ball careers, as well as footage from his Hollywood roles and news footage of the gathering of support he assembled among other African-American sports icons for Muhammad Ali when the Champ refused military induction. The film is no hagiography that paints its subject as a flawless hero. But it draws a picture of a man who has used his innate gifts and talents to become the best human being that he could be, no matter the arena. Spike Lee definitely sees Jim Brown as a man who's got game.

Austin Chronicle: Was this movie your idea or something that HBO brought to you?

Spike Lee: No. It was my idea. I got to know Jim a little bit when I cast him in He Got Game. During the course of that film I was wondering what my next documentary would be because I had just finished up doing 4 Little Girls, and I said, "Jim, you know, if I ever get the money I'd like to make a documentary about you," and he said, "Fine. I don't know if they're going to let you make the type of film it needs to be, but if you ever get the money I'm for it." When the day finally came that I got the money, he said, "Let's go." He was very helpful about not trying to impose any of his viewpoints. He said, "Look, this is your film. Interview who you want. I'm not going to try to steer you to interview certain people or detract from things you want to do. This should be your vision."

AC: There's such a variety of people interviewed for this film: football figures, Hollywood stars, and business associates. It doesn't just focus on the football aspect of Brown's career.

SL: To me, that was the reason to make this film. Not too many human beings live and have the type of life Jim Brown has. He's been in the forefront of so many different movements, at so many different levels. He's changed the landscape. And he's still relevant today, 60-whatever years old. Not only was he the greatest football player ever, and often considered the greatest lacrosse player ever but he is so much more than that. So often today, athletes just think that the game and their playing totally defines who they are, and you might as well say they were dead after their playing days end. Right here is someone who walked away, at the top, like Sandy Koufax.

AC: Are athletes and sports people your intended audience for this film?

SL: I think it's good that a lot of the young cats might see somebody like Jim or guys of his era. I'm not gonna condone Terrell Owens, but Jim would never pull a Sharpie out of his sock after a touchdown and sign the ball. He never did any celebrations after a touchdown. He just handed the ball politely to the ref and went back to the sidelines.

AC: You say that Jim Brown changed the landscape. Can you elaborate?

SL: No. 1: There's never been an athlete like him before -- the size, the physical specimen, so big and so fast. And also he's an atypical black athlete. A lot of black athletes at the time just happened to be there. But Jim was at the forefront, trying to organize, use his power in the league, trying to organize guys, getting to see that they had a voice. He was the sparkplug for a whole lot of different things throughout history.

AC: I never realized Jim Brown's departure from football was due to the shooting overrun on The Dirty Dozen.

SL: Well, it rained a lot in England, and the production got behind, and camp started, and Art Modell [former owner of the Cleveland Browns] said that unless Jim came back to camp on time they were going to fine him. You don't give Jim Brown ultimatums or back him into a corner. So Jim said, "Fine. I retire."

AC: Jim Brown's bold attitude seems to be the thread that follows him through all his different endeavors -- even to the point of being willing to go to jail rather than be demeaned (as he viewed it) by the recent community service order. [Brown was convicted of brutalizing a car during a dispute with his wife Monique, who never pressed charges in the incident, despite having called 911.]

AC: We tend to associate Brown's career with the blaxploitation films, but he did a lot of films prior to the start of that movement: 100 Rifles, The Dirty Dozen, Ice Station Zebra, etc. In fact, in retrospect, it seems Jim Brown paved the way for there to be a blaxploitation movement. Without him, there could never have been a character like Shaft.

SL: He really blazed a trail for other black action heroes. One thing I will say is that this documentary is not a bouquet to Jim Brown. I think it's very, very, very even-handed in its treatment. We didn't go out there to slam the man. We wanted to present him as a complex human being, and he has flaws like all human beings. If you thought this was going to be a bouquet, we wouldn't have busted our asses tracking Eva Bohn-Chin. We had to track her down in Germany. She's never gone on film -- ever -- to talk about what happened between them. You know, there were only two people in that room, him and her. We gave each one the opportunity to say what happened.

AC: It's not as though her rather fuzzy recollections exactly clarify anything, though. How do you respond to the criticism that the film should have paid more attention to the various allegations of physical abuse with which Jim Brown has been charged over the years?

SL: We listed it. We pulled that news report right off the air -- all the charges that have been pressed against him. And he was never convicted of any of them. I don't know what more we can do. We see him on Larry King. We hear [his wife] Monique's story. And he ends up going to prison for that: for breaking the windshield of a car.

AC: The other uncomfortable area you get into is his failure as a father, especially in regard to his son [Kevin*, who has experienced serious drug problems and other difficulties]. I found that segment additionally interesting because it's the only time we hear your voice on film as the interviewer in this documentary.

SL: Right. I just found it incredible that [Kevin* remembers only one time] of being hugged by his father. ... I've always been intrigued about the offspring of a famous father or famous mother. Sometimes those children are the casualties of that fame.

AC: Will Jim Brown be with you in Austin?

SL: Yes. We're going to present the film together, and we're both going to do a Q&A afterward, and it'll really be great. What's Texas rated? No. 4? Depending on what poll you go to, they're not lower than five. It would be great if some of those players came out and saw the film. It would be very educational. ... We made a point of doing the screening in Texas because we know how big football is there. Hopefully, people will come out to see the greatest football player ever.

AC: Let me ask you a couple of questions about 25th Hour, a fiction film that opens nationwide this December. You shot some of it in the Austin area.

SL: We used Austin as a base and shot in three or four towns surrounding Austin.

SL: Well, we had the worst monsoons of the last 50 years. Other than that, it was great working there. We know there's a vibrant film community, especially in Austin. I've spoken before at the University of Texas at Austin. I know they have a very fine film school and a driving independent film community there. So we were glad to come down and would not hesitate to come back down again.

* This name was misreported in the original version of this story.