And now for something deliciously different: "A Little Vicious" (1991), a tragicomedy (and Oscar-nominated documentary short) about a pit bull on death row. The credits for this film by then-first-time director Immy Humes include Bandit the dog (in the pit bull family), the Connecticut Canine Control, and narrator Kevin Bacon. Got your attention yet?

Bandit, the irascible pet of Lamon Redd, a poor black resident of Stanford, Conn., gets himself into trouble when he repeatedly bites neighbors, and then finally his owner. While Bandit cools his heels in doggy jail, thinking, no doubt, about what he'd like to be served for his last meal, a legal battle over his fate ensues, resulting in a 90-day stay of execution during which Bandit is offered a chance to see the error of his ways and repent. His spiritual leader will be dog trainer, founder of the American Pit Bull Defense Association and Literary Society, and dog person par excellence Vicki Hearne. We watch Hearne, a poet and trainer with a professed direct line to hers and Bandit's inner dog, prep Bandit for his (hilarious) day of reckoning before the dog authorities, the American Temperament Training Association judges -- his last chance to prove that he's reformed, a new dog. I won't ruin the ending for you.

Humes will present "A Little Vicious" along with "Lizzie Borden Hash & Rehash" (1996) and footage from two works-in-progress about marijuana in America today (one of them involving her late father, Doc Humes, a Harvard professor and marijuana activist), as part of the Austin Film Society's monthly series, the Texas Documentary Tour. "Lizzie Borden Hash & Rehash" is a whimsical, well, hash and rehash of the as-yet-unsolved murder of Lizzie Borden's parents. (Though Lizzie was subsequently acquitted of the crimes, the ditty endures: "Lizzie Borden took an ax/And gave her mother forty whacks/When she saw what she had done/She gave her father forty-one.") Intercutting the comments/ruminations/theories of 28 Bordenite talking heads -- a cast of historians, poets, scientists, doll designers, and artists who've taken on the Lizzie Borden name -- Humes parodies both the talking-head documentary form and the endless obsession and paradigm-shifting grist that an inexplicable crime like this engenders for succeeding generations. Lizzie as incest victim? Lesbian? A feminist taking a swing at the prevailing patriarchy?

Austin Chronicle: First, how did you come upon the Bandit story?

Immy Humes: I had read a book by Vicki Hearne about animals -- Adam's Task: Calling Animals by Name -- and loved it. Several months later, a friend saw a tiny, tiny story in The New York Times [called] "Pit Bull to Learn New Tricks or Face Death." It mentioned that the trainer's name was Vicki Hearne, but didn't connect the dots to the writer/Yale professor. I called Vicki out of the blue, the next day I was on a train to see her in Connecticut, two days later we were filming. (Many thanks to Jean de Segonzac, a great filmmaker who shot for me for free.) I figured I'd get the 90-day reprieve period and the end result in the can and then really look for completion money. The film sat on the shelf for two years whilst I got turned down for every grant -- and the story was so ambiguous I feared I had no film. Finally, a great editor friend volunteered to work for deferred payment -- so off we went and finished the film. Finally.

AC: And the inspiration for "Lizzie Borden"?

IH: Almost exactly the same story with Lizzie. I read an amazing article, again in The New York Times, about Lizzie Borden and an upcoming conference to mark the 100th anniversary of the murder. I decided on a Friday to go to the conference on Saturday and was so overwhelmed with what I heard and saw that I immediately knew I wanted to make a film. I ran around to borrow an old camera and used video tapes, came back Sunday morning, set up a "studio" in a classroom off the conference auditorium, and filmed 20 interviews.

Then the tapes sat on a shelf as I got turned down for grants -- and I began to think that I was crazy to imagine this was a film. After a couple of years, I collected three more key interviews [with] the three contemporary Lizzie Bordens (punk singer, filmmaker, heavy metal singer). The same great editor again stepped up to the plate -- et voilá.

I sent the completed tape to the then-head of the IDA [International Documentary Association], who I knew. I never heard back, so I called him. He confessed he hadn't called because he'd watched the tape and was appalled. "It's not a film -- it's a piece of shit. You shouldn't have made it." 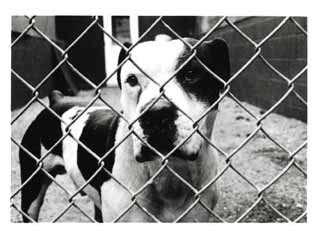 "A Little Vicious," but a lot cute

In both films, I am trying to bring out how different people see things differently. A dog, Lizzie Borden -- both serve in a way as mirrors. They are central figures upon which we can project ourselves -- and connect to in multiple ways. In "Lizzie," it's endlessly fun to see how the ladies who are interested in period costume find their connection to the story through Lizzie's wardrobe; the scientist gets hooked on the forensics; the Gertrude Stein expert gets into Lizzie's connection to -- yup, you guessed it -- Gertrude Stein. And the documentary filmmaker sees ... a documentary film.

This is another way of looking at story/narrative/myth -- the stories that become legends or myth are those stories that afford such multiple points of connection. They are like molecules with open bonds (if that is chemistry) -- we, all of us, many of us, connect and cluster around a single story, with all our infinite shades of different interpretations or interests. The story about my father is probably different, though it does share some elements, like an ambiguous central character. I wanted to make this film since some time before he died, which was 10 years ago. And I started collecting bits and pieces of footage, but I didn't dare film him for real. It's too bad -- he would have made a great character for a vérité-style film -- i.e., someone to follow around. But I was inhibited, and also never thought of it that clearly.

AC: Talk some about the differences in style for the films you've done commercially as opposed to shooting your own stuff and the challenges of the switch. Is it hard to switch back and forth?

IH: I draw a big distinction between work where I have final cut and work where I do not. I've done much more work for hire than for myself. In fact, I've done a lot of the former (producing for A&E, National Geographic, Court TV, NBC News, even [Michael Moore's] TV Nation) and too little of the latter. I think the independent films are better, so far. But they are much harder to make -- for creative, psychological, and practical reasons.

But I also really enjoy doing work for hire -- it is great to get something made without having to fundraise, and I like being in the marketplace, and trying to create within the constraints of American television style. The differences in style are fascinating. I would love to do a show & tell about it, and show the things that TV executives have forced me to cut; they invariably pick my favorite moment and cut it out. I used to think that was just uncanny, but after years I finally figured out that it's perfectly explainable: My favorite moments are always the ones where something kinda odd happens, something just a little unusual or unpredictable. And they stick out in that sense. So they are just demanding to be lopped off -- commercial documentary TV usually likes things to be predictable, in style and content.

It's not at all hard to switch back and forth. It's just much harder to do the independent work 'cause you have nobody except yourself to blame if you don't like it. And I wish they both paid better.

AC: How did you become interested in doing docs?

IH: I had a revelation moment -- conveniently timed to my last semester at college. I was doing an internship at WGBH, the Boston public TV station, for a big series about the Vietnam War. I was allowed to watch in the edit room as these great English film editor guys went to work on archival footage of Cambodia. I received the stigmata and have never been the same.

AC: How would you describe your style of documentary making?

IH: Oh, I dunno. Eclectic, maybe? Actually, if you have a suggestion I would be very pleased. I always find it hard to answer when people ask me what kind of documentaries I make. Or when they ask me "What's your angle?" on such and such a topic. I go blank.

"A Little Vicious," "Lizzie Borden Hash & Rehash," and "The Doc-umentary" will be presented as part of the Texas Documentary Tour on Wednesday, Oct. 23, 9:15pm, at the Alamo Drafthouse Downtown (409 Colorado). Filmmaker Immy Humes will introduce the film and conduct a Q&A session following the screening. Advance tickets are available online (www.austinfilm.org) for AFS members. Tickets will go on sale at 6:15pm on the day of the show. Admission prices are $6 per show for the general public; $4 for AFS members, KLRU members, and students. The Texas Documentary Tour is a co-presentation of the Austin Film Society, the University of Texas RTF Dept., The Austin Chronicle, KLRU-TV, the SXSW Film Festival, and the San José Hotel.