A last conversation with Kael, the last decade with her successor, and a few words from online armchair critics 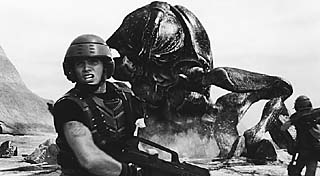 The movie tagline is a triumph of reductionist thinking: an entire two-hour movie boiled down to just a few words. You won't find a film without one, from the festival to the multiplex; even the kids down the street with a camcorder have one. Not coincidentally, film reviews have also followed this trend. Thumbs up, thumbs down; one star, two star, red star, blue star. It's only fitting that taglines and film reviews should be brought together. Four Word Film Review (www.fwfr.com) is the Web site where this happens. Armchair Manny Farbers post their opinions: sometimes silly, sometimes apt, always concise. A few highlights: "Shaky camera, shaky plot," (The Blair Witch Project); "Bore you, I will" (Star Wars: Episode 2 -- Attack of the Clones); "In love with itself" (Royal Tenenbaums); "Proof that turkeys float" (Waterworld).

The best part is crafting your own four-word torpedo and taking out the latest Hollywood blubbernaut. To put it succinctly: "DIY criticism: endless fun."