A solid, if not stupendous, year at the Toronto International Film Festival 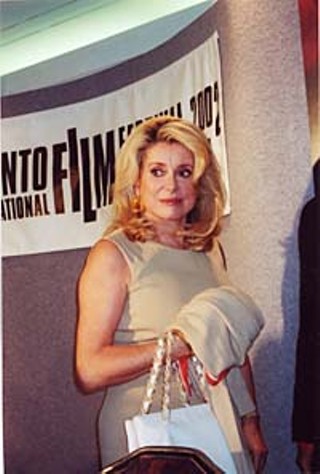 Equally important as seeing the movies is seeing the stars and discovering, for example, that Catherine Deneuve (promoting her new film, 8 Women) looks even better in person than she does in the movies. (Photo By Marjorie Baumgarten)

It's always foolhardy to attempt observational summaries or generalizations about the films viewed during one's visit to the Toronto International Film Festival -- one of the biggest and most important film festivals in the world, and certainly on this continent. This year, the festival's 27th, offered a disparate selection of 265 feature films and 80 shorts from around the world, and even the most dedicated (and organized) of film watchers could see only a statistical smattering of what was available. Of course, there is also buzz to contend with, and the growing heat various movies develop during earlier bows at festivals from Venice to Cannes to Sundance.

Many others I compared notes with in Toronto expressed overall feelings that were similar to my own: We had seen lots of solidly good new films by newcomers and old hands alike -- something that bodes well for the fall and winter release season since many of these films use Toronto as their North American launch pad -- but very few of us were totally knocked out by any one movie. Although I liked most of what I saw, nothing blew me away. There were also many films I regret missing; the overcrowded press and industry screenings prevented many of us from getting in to see several of our top choices despite showing up a half-hour early (a well-publicized festival gripe among the press corps this year). Additionally, a heavily front-loaded screening schedule slotted several big movies at competing times (reportedly because of the fear that many of the festival out-of-towners would head back home before Sept. 11).

Ironically, one of my main impressions of Toronto is really an impression of Detroit. Three outstanding movies focusing on different aspects of the Motor City music scene screened during the festival. Standing in the Shadows of Motown, based on the book by Alan Slutsky, is a rousing documentary that shines light on the unsung source of the Motown sound: the Funk Brothers. These studio musicians laid down the tracks that played behind every Motown hit until the shop pulled up stakes in 1972 and moved to Los Angeles. The Funk Brothers are the faceless (until now) artists whose contributions were overshadowed by the celebrity of the singers. But, as this documentary makes clear, the rhythms and hooks of these session players, whom Berry Gordy recruited from the local jazz clubs, are the reason the Motown sound has enjoyed such enduring popularity. The movie makes use of some 30 songs from the Motown catalogue and intersperses reminisces of the surviving members with performances by modern-day singers, such as Joan Osbourne, Meshell Ndegeocello, Ben Harper, Bootsy Collins, and others. It's scheduled to open at Austin's Dobie Theatre on Nov. 15, and is not to be missed.

Another fascinating documentary, titled MC5: A True Testimonial, relates the story of the rise and fall of this seminal Detroit band whose kick-out-the-jams style of loud, fast, and confrontational rock & roll was combined with a radical political agenda. In the late Sixties and early Seventies, they were the Motor City's clang to the Motown purr. An amazing amount of archival footage is used along with narratives by the few surviving band members (whose guiding inspiration was the now-deceased Fred "Sonic" Smith, who later married Patti Smith, who does not participate in the film) and their activist manager John Sinclair. MC5 is a lively record of an important American band ultimately felled by bad decisions and drugs.

On a more contemporary front, one of the hottest tickets of the festival was Eminem's semi-autobiographical 8 Mile directed by Curtis Hanson, which screened only once and as a work in progress. Ticket scalping ran rampant even though the Detroit-bred star was not in attendance. Neither was this reviewer. However, the movie has been met with a surprisingly warm critical reception that, at the very least, guarantees that Eminem will become a factor to contend with in the film world as well as the music stage.

Many established directors were at the festival with strong new works. Brian De Palma showed that he is still up to his old tricks in Femme Fatale, starring Rebecca Romijn-Stamos and Antonio Banderas in a twisty thriller that opens with a steamy lesbian sex scene and a heist gone wrong during a Cannes Film Festival screening. Paul Schrader presented Auto Focus, his rendition of the inner life of Hogan's Heroes' Bob Crane, whose lurid death was undoubtedly the result of his sex and pornography addictions. Greg Kinnear gives an uncanny performance as the former TV star, while frequent Schrader collaborator Willem Dafoe lends creepy support. Neil Jordan delivered one of the festival's favorites with The Good Thief, a wonderful reimagining of Jean-Pierre Melville's noirish classic Bob le Flambeur. Nick Nolte thoroughly inhabits this modern-day Bob, a heroin junkie with a gambling habit who kicks the drugs in order to pull one last heist. Nolte so embodies this role that his arrest only a few days after his promotional appearance in Toronto (where there had been several reports of his odd behavior -- in addition to his constant use of a walking stick) is disturbingly worrisome. David Cronenberg takes a productive new path in Spider, in which Ralph Fiennes plays a schizophrenic. Rather than Cronenberg's usual display of visceral horrors, the director composes this film as an interior horror, quietly and effectively placing the viewer inside the schizophrenic's untrustworthy head. Jim Sheridan displays his remarkable gift for storytelling with the heartfelt family saga In America (working title), and I finally caught up with Gus Van Sant's minimalist Gerry, an audience-dividing exercise laced with humor and ennui that I missed at Sundance. It's the kind of movie I can imagine little place for outside the festival circuit.

Another eagerly anticipated movie was Paul Thomas Anderson's Punch-Drunk Love. Anderson switches gears here slightly; instead of his epically proportioned Magnolia and Boogie Nights, Punch-Drunk Love is a 91-minute dramedy starring Adam Sandler. Audience members I spoke with were divided on how effectively the movie tells its story of a man who harbors an excessive rage beneath his goofy, almost pathetic, exterior. One national critic told me he thought it was a profoundly important and distinctly American work, while a Canadian friend commented, "Kind of a wank, eh?" My sentiments align with the latter. No divisive feelings were heard, however, regarding Lost in La Mancha, a film that documents the frustrating efforts of another of cinema's wild visionaries, Terry Gilliam, as he is thwarted at every turn while trying to mount his long-fantasized film version of The Man of La Mancha. Weather, actors' schedules, a health crisis, and much more beset this doomed production in a litany that becomes heartbreaking to witness. Few "making of" movies have ever aroused this kind of emotion and sympathy.

It was a strong year for actors at the 2002 festival -- both on and behind the screen. Matt Dillon and Denzel Washington premiered their directorial debuts (City of Ghosts and Antwone Fisher, respectively). Salma Hayek shepherded Frida to the screen as both producer and star, and delivers a sterling performance as the artist Frida Kahlo, as does Alfred Molina as her womanizing husband and mentor Diego Rivera. More artistic rendering and insight might have been expected from the visually flamboyant director Julie Taymor. As it stands, Frida is a solid biopic that focuses more on the life of the woman than the life of the artist, but at least we can be thankful that Hayek won out over the others -- Madonna and J.Lo -- who also fought to film this project.

Strong onscreen performances were almost de rigueur. Frances McDormand reaffirms her command of the screen in Laurel Canyon, the new film by the director of High Art, Lisa Cholodenko. In it McDormand plays a super-successful Sixties-style record producer who has lost none of her countercultural zeal for drugs, sex, and rock & roll, despite lovers half her age and the return of her son, the doctor. Women looking for role models might settle for worse.

Last year's festival was upstaged midway by the events of 9/11, so it's appropriate that two new films concerning the tragedy were screened to mark the anniversary. 11'09"01 is an international omnibus film composed of 11 segments directed by 11 notable directors (including Ken Loach, Mira Nair, and Sean Penn). Each director was assigned to film his or her "subjective conscience" and, as one might expect, the results are uneven, though sometimes quite moving. The Guys is a film version of a play that has been performed in New York by a rotating cast of actors over the past nine months. Jim Simpson directs the film, which stars Sigourney Weaver (Simpson's wife) and Anthony LaPaglia in the story of a writer who helps a bereaved firehouse captain write a cascade of eight eulogies. In its transition to the screen, however, the film loses some of its urgency. Given the amount of time it takes to make a film, and the distance often needed for reflective commentary, it may be a while before the art and craft of filmmaking deals with the event in any truly significant manner. We'll have to check back at next year's festival.