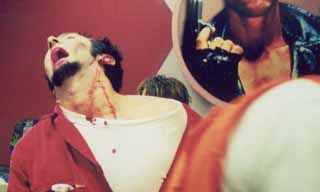 The living dead invaded a Blockbuster Video at Congress and Oltorf on Tuesday, Aug. 27, in a determined but vain attempt to check out copies of Scary Movie on DVD.

Bloodstained, groaning, and wearing Cinematexas T-shirts, the undead seemed confused by the membership application process. Store clerks were unresponsive to the zombies' nonverbal efforts to do business, and the 30-odd walking corpses eventually left peacefully, moaning "Due back Sunday" on the way out.

The prank was motivated by a love for mutant cinema, a need for publicity, and an insatiable urge to feast on human flesh.

"Blockbuster is just an image bank for Hollywood," alleges zombie Steve Ausbury. "They create these consumer zombies who just sort of buy whatever's available. And so we're using guerilla theatre to show people that there are other options." Such as, that local purveyor of "mutant cinema," the Cinematexas International Short Film Festival, of which Ausbury is the programming/development director. "We show experimental films, we show films that challenge viewers. We're everything that Blockbuster isn't." Such as, undead.

The Cinematexas International Short Film Festival runs Sept. 17-22; check here for the festival lineup. Blockbuster Video can be found at a corner near you.