He Who Hits First, Hits Twice

The Urgent Cinema of Santiago Alvarez 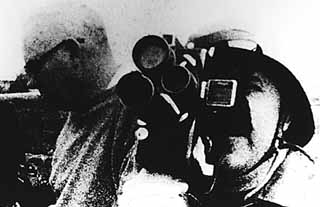 In his first 40 years, Cuban filmmaker Santiago Alvarez did not make a single film. In his last 40 years, he made more than 600. "I am a product of 'accelerated underdevelopment,'" Alvarez would say. "The Revolution made me a film director. I learnt the job fondly handling millions of feet of film."

Some of the most vibrant cinema of the past century came from this footage handled by Alvarez. As a newsreel director for the Cuban government, Alvarez created a far-reaching body of experimental work that resonates strongly with American viewers today -- at least, with the few Americans who have seen them.

One of the few is documentary filmmaker Travis Wilkerson. While shooting a film in Cuba, Wilkerson and his wife managed to land a meeting with Alvarez. "We ended up having lunch with him on his 77th birthday," recalls Wilkerson. "We decided to drop the other film and make a film about Alvarez instead."

Alvarez agreed to cooperate on one condition: The filmmakers would have to become more familiar with his body of work. "So for two weeks, we would go to a screening room at ICAIC [the Cuban film production office] every day and he'd show us his films, and then we'd talk about them." Before his return to America, Alvarez presented Wilkerson with screening copies of a number of his films. "I think he felt like his work was being forgotten," explains Wilkerson. "He was so angry at the U.S., but there's no question he was excited that Americans would see his work."

Wilkerson will present a selection of these films -- some of which have never before been screened in the U.S. -- at a program titled "He Who Hits First, Hits Twice: The Urgent Cinema of Santiago Alvarez."

Urgent is an apt description for Alvarez's oeuvre. His films are pamphlets, not documentaries. Their function was to keep the Cuban populace informed about current events at home and abroad, and as a result they were made on tight schedules and quickly distributed to extraordinarily large numbers of people. For instance, when Che Guevara died, Alvarez was commissioned to make a short film for a public memorial in honor of the revolutionary. He was given just 48 hours to make the film from start to finish.

In addition to the stringent time constraints, Alvarez and the filmmakers of ICAIC had extremely limited resources to work with. The difficulties of negotiating the severity of these restrictions forced the filmmakers to collaborate and innovate. Alvarez is often quoted as saying, "Give me two photographs, a moviola, and some music, and I'll make you a film." And not just any film, but a sharp-edged, structurally conscious work of termite art that devours its own boundaries and transcends the limitations of the medium. "He took this form [newsreels] that is associated with the most tedious films imaginable, and he makes this amazing experimental work," Wilkerson points out. "And what's peculiar is that these films are so personal."

Alvarez's "LBJ," which will be screening at Cinematexas, actually earned criticism from his contemporaries for being too personal. The film employs a three-part structure: Part L for Martin Luther King Jr.; Part B for Bobby Kennedy; part J for John Kennedy. Through found footage and photographs from sources like Playboy and Life magazine, "LBJ" implicates the American president of the same name in each of the three assassinations. This implicit accusation may fall flat on a factual level, but Alvarez likely intended to indict the corruption that LBJ symbolized to Cubans, rather than the man himself.