The far-from-prolific Senegalese director Djibril Diop Mambety (1945-98) made only two features and a number of shorts in three decades of filmmaking (he was working on a third feature when he died), but these two inspiring 45-minute short films show a remarkable artist at work. In 1994's Le Franc, Marigo, a dirt-poor musician, picks up a bill dropped by a careless rich man and is immediately tackled by a dwarf who forces him to buy a lottery ticket. The lottery is the first since the devaluation of the national currency, and the dwarf may or may not be the god of fortune. Marigo sticks the ticket to the door of his tiny shack, which leads him to carry the door through litter-strewn plains, shaky bus rides, and a city that seems half-junkyard, when his number comes up. Marigo seems the very embodiment of the wise fool, hapless and holy, and his journey is slow and dreamlike, funny and full of uncertainty and joy. The Little Girl Who Sold the Sun, released in 1999, is at once more straightforward and more powerful still, described by the director himself as "a hymn to the courage of street children." Lissa Balera plays Sili Laam, a little girl with a leg brace and crutches who begs while her blind mother sings in the street. After being knocked over by a band of wild newsboys, she signs up to sell the Soleil, because "what boys do, girls can do, too." Though she's tiny and her limbs are wasted, she's tough as nails, uncowed by the newsboys protecting their turf, and even bossing corrupt cops around. The crushing poverty Mambety depicts on the streets of Dakar is constantly counterbalanced by faith -- faith in Allah, yes, but also the faith in oneself that comes of having no alternative but to be strong.

Le Franc and The Little Girl Who Sold the Sun screen on 9/18, 7pm, at the Texas Union Theatre. 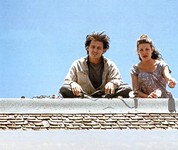 Arizona Dream (1993)
Johnny Depp plays Axel Blackmar, a guy who talks to fish, dreams of the Arctic, and sure as hell isn't going to take over the Cadillac dealership his Uncle Leo (Jerry Lewis!) owns.