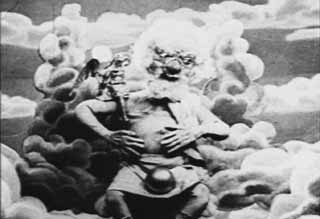 "The Frogs Who Wanted a King"

In Moscow in 1910, the entomologist and aspiring documentarian Wladyslaw Starewicz sat in the studio of his very first employer, attempting to film a battle between stag beetles. To his frustration, though, the beetles refused to fight -- one of them even passed away under the intense heat of the studio lights. Starewicz, dismayed, then attempted a different approach; he constructed his own models of the beetles, whose poses he changed, frame by frame, to simulate motion. Wladyslaw Starewicz had just invented his calling -- Stop-Motion Puppet Animation -- which he pursued steadily until his own death 55 years later, and which duly taken up by international filmmakers as diverse as Ray Harryhausen, Nick Park, and the Brothers Quay.

Commercially successful during his own lifetime, Starewicz remains largely unfamiliar to modern audiences due to the fact that a great many of his films have been lost, while his surviving films have only recently been revived. Contemporary viewers new to Starewicz should be delighted, though, to discover in him that rare innovator whose work mixes the spark of invention with a still-astonishing level of technical mastery; Starewicz personally designed, constructed, animated, and shot almost all of his films (The Tale of the Fox, which took him 10 years to finish, features a crowd of up to 100 simultaneous onscreen characters), and yet their illusions are rarely broken by continuity errors or visible strings. Instead, Starewicz tricks the eye consistently and wondrously, inviting us into his miniature world of rippling pools, rustling leaves, and flowery glades.

Though Starewicz considered children his primary audience, his films are almost wholly absent of the cloying sentimentality that has marked children's animated fare from very early on. In fact, they can be slightly disturbing: In "The Cameraman's Revenge," Mr. and Mrs. Beetle may cutely embrace within their tiny home, but when they hurry away to their respective extramarital affairs they do it with a familiar arthropod scuttle. Likewise, Starewicz denies a happy ending for "The Frogs Who Wanted a King," said frogs being serially devoured by a towering stork sent to them by a contemptuous Jupiter. Still, there is no malice in Starewicz -- just a vivid, Grimm Brothers intensity. Freed from the reality in which they are inanimate objects, these animated bugs live in a world that is ruled by neither insect reality nor anthropomorphic Disney preciousness, a world specially created for them by a filmmaker who takes care to never so bend his stories around morals as to drain them of their magic. Magic, after all, is the quality Starewicz's flickering tableaux seem most fixated on creating. For all of the tediously detailed work involved in Starewicz's films, he never loses his light touch or that original shock of delight in first discovering that he could bestow -- through the camera's amazing tricks -- life upon the lifeless.

"Six Legs to Tango: Four Short Films From Wladyslaw Starewicz" screens on 9/19, 7pm, at the Alamo