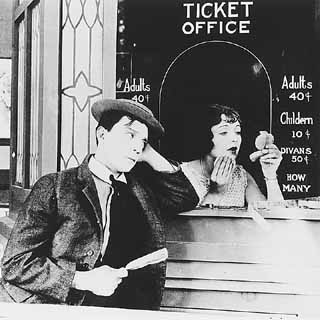 Nestled in the back of Cinematexas' 2002 program book, the fest directors thank German filmmaker Werner Herzog (in attendance this year) for "joining our little uprising." In an interview with Chronicle writer Marc Savlov (below), Herzog calls himself a "soldier of cinema." Some of the programs that make up Cinematexas' nine days of nonstop short cinema boast names like "Discipline and Punish" and "He Who Hits First, Hits Twice." Mighty truculent bunch, this one.

If the programmers at Cinematexas sound like they're at war, it's because they are: They're warriors for the much-neglected art of short filmmaking. For seven years now, they've been shouting loudly and proudly for the experimental, the cutting-edge, the overlooked and underrepresented, the deliciously deranged and just plain discomfiting -- all neatly packaged in minutes-long morsels. They're not afraid of being political, taking on the Palestinian-Israeli conflict in the Parallax View sidebar; they're not afraid of being weird (stop-motion pioneer Wladyslaw Starewicz's cricket-riding-a-bicycle-on-the-way-to-meet-his-married-beetle-lover). They're not afraid of being political and weird (see their zombie stunt at Blockbuster Video on p.47). That doesn't mean Cinematexas is out to give you the squirmies; for an utterly romantic reminder of why short stuff can be so damn good, see Keaton, Chaplin, Laurel & Hardy, and W.C. Fields in "Silence," a program of silent comedies curated by Terrence Malick. If that sounds too soft for such a rebel outfit as Cinematexas, consider this: Charlie Chaplin and Buster Keaton didn't make it on this year's Sight & Sound poll. The overlooked, indeed.

For a festival devoted to the celebration of short films, the schedule is frightfully unwieldy. But you'll get the hang of it. The objective: Hit as much as you can, including competition screenings (international and UT-specific); a raft of special programs, devoted to the likes of Herzog, Starewicz, and Jean-Luc Godard, whose 10-part TV series, France/Tour/Detour/Two/Children, runs throughout the fest; Parallax View, the political arm of the fest; plus the stuff we haven't even gotten into, like Terra Cognita, an installation series, and the movies & music mayhem of Austin Eye + Ear. All it takes is a little strategizing, and it's off you go. So what are you waiting for? You don't want to be late for the uprising.