(Backroom) Journeys With George (and James) 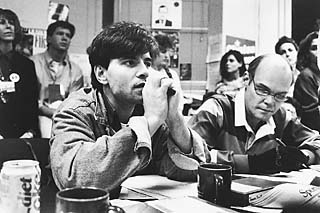 Can it be that 10 years have passed since Gov. Bill Clinton swept George Sr. out of the White House to the chorus of "don't stop thinking about tomorrow"? Granted, given the outlandish course of the following eight years of tomorrows, the irony of the soundtrack choice is fairly overwhelming and, certainly, we watch D.A. Pennebaker and Chris Hegedus' vérité footage of the 1992 campaign with different eyes today than when the film was released in 1993. But still, it's a swell ride -- nostalgia and all -- enhanced, undoubtedly, by our 20/20 hindsight.

For those for whom the Clinton-era filmography may have begun to blur, The War Room is the Oscar-nominated documentary that focussed not on the promising candidate from Arkansas but on the maneuverings at the Little Rock campaign headquarters of Clinton campaign-meisters James Carville and George Stephanopoulos. According to the film's producer, R.J. Cutler (who is bringing the film to the Alamo Drafthouse on September 11 as part of the Texas Documentary Tour), this was not the original intent of the film. Galvanized by the idea of making a film about the '92 election late in the primary season, then-fledgling doc-maker Cutler recalls that the easy part was getting Pennebaker and Hegedus, whose work he'd long admired, interested in the project. He would then spend months in a frantic attempt to gain access to someone in the Clinton campaign with the authority to green-light the filming of Clinton: "That person turned out to be George Stephanopoulos, and he called at the last possible second only to tell me that there was no way this film was going to happen. As he put it on the eve of the Democratic convention, the last thing Bill Clinton was going to want with him on the busiest, most important week of his life was a film crew. In fact, it was Stephanopoulos' job to keep people like us out of there."

Given the lateness of the hour, a desperate Cutler proposed that Stephanopoulos allow the crew to trail him instead. "To that, he couldn't say no -- for whatever reason," recalls Cutler. "And that, of course, is always the key to a good documentary subject -- somebody who feels that their own story isn't important enough to tell. He said, 'Sure, I don't know why you'd want to watch me but come on in.' That was our entrée."

Still, the original notion persisted. "The idea was that we'd film with George and when Clinton came in the room, we'd simply leave with him and no one would notice -- a very naive idea, because that never happened. Only occasionally would Clinton come into the room and when he did, no one was going to leave with him who wasn't fully authorized to do it -- especially a documentary film crew," Cutler explained. "Fortunately, that didn't matter, because we discovered that the real story, at least from our point of view, was the story of those who were running the campaign, Stephanopoulos and James Carville, like a Lone Ranger and Tonto team."

What we are privy to in The War Room is a story that lends itself so well to cinema vérité's, fly-on-the-wall style. (Pennebaker perfectly describes the historical value of his untouched, unmediated treatment of stories like the Clinton campaign as "flies caught in amber.") We hear what's spoken, then see the space between the spoken lines, between personalities big and small, particularly that of now-legendary "Ragin' Cajun" Carville (whose outrageous verbal and facial passion dominate the screen -- matched by footage of his cool but equally fiery Republican counterpart and wife-to-be, Mary Matalin). Although remarkably, the 90-minute film is edited down from a mere 35 hours of footage shot by a crew of five in only 17 days over a four-month period, we experience vividly the dramatic mood swings -- from the early idealism-fueled optimism to the tedium, anxiety, suspense, deflation, and final elation -- inherent in any successful big-stakes push.

Austin Chronicle: It's interesting that the film turned out to be something totally different from its original conception.

R.J. Cutler: Our focus very quickly became James and George when it became clear that Clinton was either not interested or unavailable. At times we felt it would have been great if he had been around more, but it turned out not to have mattered, because the strength of the film is that it's like Rosencrantz and Guildenstern, about two people that you don't think are central to the story but whose story turns out to be as compelling, dramatic, suspenseful, and moving as any you could tell. Even this was not immediately apparent with Carville -- Pennebaker always described him as the drunken uncle who won't leave the party -- because he wouldn't stop talking and we couldn't tell whether he was performing or was this the way he was. After a while, we stopped filming him because it just didn't seem that anybody could actually be like that. It was in the editing room that he leapt off the screen in such an awesome way.

AC: Did the campaign attach any conditions to your shoot?

RC: Our philosophy is not a conditional approach; it's a collaborative one. If people don't want to be filmed, we don't film them; if they've had enough for that day, we respect that; if there's something we've filmed that they're uncomfortable with, we respect that. We're not trying to catch people with their pants down -- we're trying to tell their stories as clearly and honestly and engagingly as we can.

We didn't even have a contract with the campaign. Our approach was to make the film, show it to them in rough cut, get their feedback, and then proceed from there. Their only feedback was "don't touch a frame."

There were things you would have expected them to ask us to cut, like that scene the night before the election when George gets a call from a Perot operative threatening to go public with the names, addresses, and phone numbers of women with whom Clinton had affairs. And George, in what is a classic backroom conversation, convinces the guy not to do it. This is the kind of thing that one would expect a subject to want excluded, but that wasn't what this project was about.

They had the reaction that documentary subjects, in my experience, frequently have -- if you go about it in a respectful way and try to tell people's stories as honestly as you can, generally they are impressed and excited with what you've accomplished and grateful for the respect you've shown their story.

AC: Since The War Room and your subsequent feature, The Perfect Candidate, about Oliver North's campaign for the Senate, you've been producing multi-part television series in the vérité mode, like American High [the highly acclaimed 1997 PBS series that shadowed several suburban high school students]. Not to mention your current project here in Austin, where you will follow several UT freshmen as they navigate the shoals of their first year in college. Has your style of vérité filmmaking evolved from that of your mentors, vérité pioneers like Robert Drew, Pennebaker, Al Maysles, Ricky Leacock?

RC: I don't want to use the term evolution, because that suggests that we're more evolved. If you look at the changes in vérité filmmaking, you see that these are things that in the past simply weren't possible but which new technology has enabled us to do. I don't think one is better or worse than the other. The principles are the same; they're just different because of technological advances. For example, for less than $2,000 I can buy a broadcast-quality camera with a sound rig and give it to a subject, who can be taught how to use the camera expressly to keep daily or semi-weekly video diaries that provide a window into their own experiences that I don't think even a vérité crew ever could. We started this with American High and now use them for almost all of our projects. With a video dairy, we've expanded the point of view to include the subject's as well as the filmmakers'. Ten years ago this would have been impossible.

Ten years ago it would have been cost-prohibitive to shoot 2,000 hours over the course of a year -- too expensive even in video. We didn't really have computer databases that would keep track of all this information so we couldn't have done these huge 13-part series and if we could, it would have taken four to five years just to sift through and edit, which in itself would be enormously expensive. Today, we can edit 13 segments at the same time and be done in a year and a half.

We still share with those who inspired our work the principle of wanting to tell compelling, dramatic stories as honestly as possible, without instructing audiences how to feel and react, while emulating fiction story conventions as much as possible. Like Penny always says, a documentary film is just like a "real movie."

The War Room will be presented as part of the Texas Documentary Tour on Wednesday, Sept. 11, 7pm, at the Alamo Drafthouse Downtown, 409 Colorado. Producer R.J. Cutler will introduce the film and conduct a Q&A session following the screening. Advance tickets are available online (www.austinfilm.org) for AFS members. Tickets will go on sale at 6:15pm on the day of the show. Admission prices are $6 per show for the general public; $4 for AFS members, KLRU members, and students. The Texas Documentary Tour is a co-presentation of the Austin Film Society, the University of Texas RTF Dept., The Austin Chronicle, KLRU-TV, the SXSW Film Festival, and the Hotel San José.