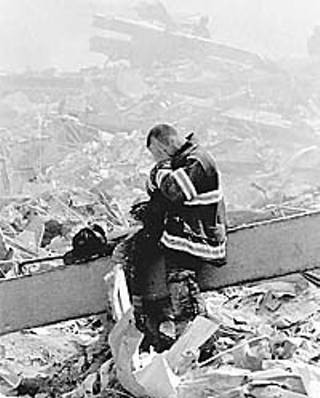 Frontline's Faith and Doubt at Ground Zero is one of many 9/11 specials to air in upcoming weeks.

The anniversary of September 11 is a little more than a week away. However, television's anniversary specials began to jell in July, according to the pile of press releases on my desk.

When you think of it, 9/11 is the first major U.S. event to happen in the thick of the Information Age. The bombing of Pearl Harbor was an event reported by radio, and print images that weren't available until several days after the event. The assassination of President John F. Kennedy was the first time that television was thrust forward, for better or worse, to capture a national Zeitgeist. Images from those four days of mourning are from an unblinking, bewildered point of view.

But things have changed in this age of media moguls. Television is as much a manufacturer of memory as it is an objective eye on the world -- if it ever could be objective to begin with. Television has become the default source from which to learn what our national memory should be. The images, the sound bites, the sentiment replayed over and over, are designed to illicit sorrow, patriotism, and resolve. Somehow, in spite of the profiles in courage, the swelling music, the tear-stained faces, I'm not feeling it. Instead, I have this nagging sense of something missing.

Most 9/11 programming focuses on our pain, our loss, the grave offense perpetrated against our people on our shore. What about the hundreds, if not thousands, of individuals from around the world who died in the towers? How did their deaths affect their home nations? An even more difficult question is: What is the United States' role in the larger world stage? Are we solely the aggrieved in this epic tale? What is the story in the gray zone, that fuzzy space between the black-and-white version of the story that predominates? It seems to me that this is necessary terrain to traverse because the truth lies somewhere in the messiness. But does it make good television? That may be the sole marker viewers have for determining what -- or if -- to watch television on 9/11. Below are some choices.

Faith and Doubt at Ground Zero. This Frontline production asks, "Where was God on September 11?" 9/3, 8pm, PBS.

MTV News Now: 9/11. MTV News correspondent Kurt Loder interviews artists, writers, and producers to discuss how the entertainment industry figures into coping with the attack. 9/3, 9:30pm. MTV will pre-empt regular programming starting at 10pm on 9/10 to provide 31 straight hours of 9/11-focused programs, including video postcards from viewers and artists who share their reflections.

Afghanistan Year 1380. A special from the P.O.V. series about human rights workers providing aid to civilian war victims. 9/9, 10pm, PBS. Note: PBS has a full menu of 9/11 programming. Check local listings or go to www.klru.org for a complete look.

. A detailed account of the structural collapse of the World Trade Center. 9/9, 8pm, A&E.

Reflections From Ground Zero. Spike Lee hosts a showcase of films created by film and television students from NYU's Tisch School of the Arts. 9/9, 7pm, Showtime.

Report From Ground Zero. Based on the bestselling book by Dennis Smith, this ABC News special provides personal narratives from those on the frontlines. 9/10, 8pm, ABC.

9/11: The Day That Changed America. CBS will offer 13 hours of live coverage starting with an expanded edition of The Early Show and concluding with coverage of commemorative ceremonies in New York, Washington, D.C., and Shanksville, Pa. Dan Rather will anchor the Evening News from Ground Zero. An encore of the provocative CBS documentary 9/11 airs at 8pm on 9/11.

President George W. Bush is scheduled to address the nation sometime in the evening on 9/11. Cable news and broadcast networks will carry his address live and in its entirety.