Pure camp, with a capital C. 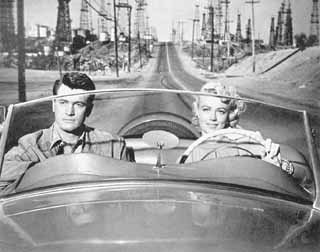 D: Douglas Sirk; with Robert Stack, Lauren Bacall, Rock Hudson, Dorothy Malone. This turgid potboiler is among the best ... and, of course, the best are done by Douglas Sirk. The movie really belongs to Dorothy Malone, who won an Oscar for her portrayal as Marylee Hadley, the over-tanned, over-bleached, boozy, slutty daughter of an oil tycoon. Marylee's in love with her brother Kyle's best friend, Mitch (Hudson), and will try practically anything to trap him. Mitch is in love with Lucy (Bacall). Lucy is married to Kyle (Stack), but is in love with Mitch. Marylee is insanely jealous that Mitch doesn't want her. Kyle wants children, but there seems to be a problem: Kyle is sterile ... or so he thinks. Everyone's always dressed to the nines, and they all drink and drive constantly. The actresses look fabulous in gorgeous Fifties couture, even if their Fifties eyebrows are twice the size of the men's. Meanwhile, the viperous Marylee is telling the drunken Kyle to keep an eye on his wife and Mitch. "You're a filthy liar," he says, to which she replies, "I'm filth. Period." And she's right. As she performs a very tawdry mambo in her room, she peels out of her evening gown and into a flame-colored peignoir, kicking up her heels and caressing herself, while on the stairs outside her room, her father is dying of a heart attack. There's even more scandal to be had, ending with that final delicious shot: Marylee, now the queen of Hadley Oil, in her butchest Eve Arden lady-boss suit, as she almost lasciviously strokes and caresses a miniature oil derrick beneath a portrait of her father. Pure Camp, with a capital C.