Bossa nova and an wonderful spin on a timeless Greek tragedy make Black Orpheus a keeper. 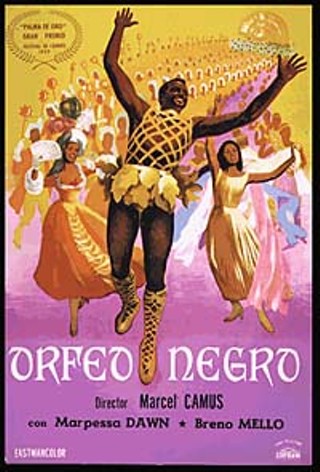 D: Marcel Camus; with Breno Mello, Marpessa Dawn, Lourdes de Oliveira, Léa Garcia, Ademar Da Silva. Take the mythical love story of Orpheus and Eurydice, transpose it to Carnaval in Rio de Janeiro while making it realistic to time and setting by starring only black actors and you'll have Black Orpheus, the colorful pièce de résistance in French filmmaker Marcel Camus' underrated career. Orfeo (Mello) is a trolley car driver in downtown Rio who falls in love at first sight with Eurydice (Dawn, the director's wife). But Orfeo is already engaged to marry Mira (the sultry de Oliveira), whose persistent advances he repeatedly ignores. In sync with the mythology, Orfeo is known as much for his musical talent as he is for swooning women -- the word among the idolizing neighborhood children is that his early morning strumming makes the sun rise. But his love for Eurydice -- who is coincidentally staying right next door with her cousin Sarafina (Garcia, a charming actress) -- is undeniably true. In the Greek myth, Eurydice is killed from the bite of a viper and Orpheus goes to the underworld to retrieve her soul and bring her back to life. This is well-paralleled in Black Orpheus. Through the nighttime chaos of the Carnaval celebration, Eurydice is stalked by Death (de Silva, in a silly costume of black tights). Camus broadens the film's scope beyond its tragic forbear with jabs at contemporary Brazilian politics (the few white actors play godlike positions of power, the missing persons department is hauntingly empty and filled with countless stacks of paper). It's questionable how effective these scenes play, considering the first three-quarters of the film are exquisitely free of any social commentary. This didn't seem to matter to the Academy of Motion Picture Arts and Sciences, Cannes or the Hollywood Foreign Press Association, all of whom lauded Black Orpheus as one of the year's best films. Interestingly, Camus' picture is known more for what it changed in the world of music than for what it changed in the world of celluloid: Soundtrack composers Antonio Carlos Jobim and Luis Bonfa introduced the style of bossa nova to popular culture and almost instantly became international superstars. This end, it seems, is how the music-loving Orfeo would have wanted it, anyway.