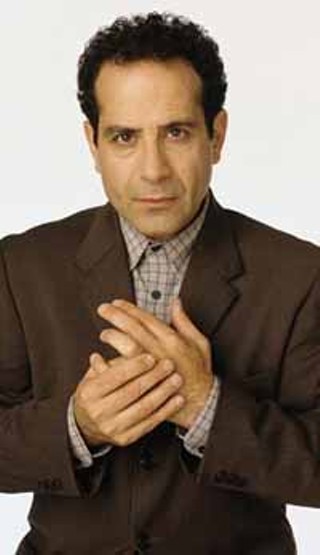 Tony Shalhoub stars in the USA Network's Monk, which will be repurposed in the fall on ABC.

It used to be that moving from the big screen to the TV screen was a sign that an actor's career was in trouble. While it may be difficult to see through this summer's drove of reality series and primetime talent shows, television has provided some "to die for" opportunities for actors more commonly associated with film. Fox's 24, HBO's Sex and the City, Six Feet Under, The Sopranos, and Curb Your Enthusiasm, ABC's Once and Again and The Job (both cancelled), NBC's The West Wing, and Showtime's The Chris Isaak Show are a few examples of quality work created for the small screen.

The upcoming fall TV season sees a number of actors who made their mark on the big screen moving to the small screen -- Mark Addy (The Full Monty), Treat Williams, Anthony LaPaglia, and Tim Curry among them. While their appearance doesn't guarantee a quality product -- what was Gina Gershon thinking when she signed on to Snoops in 1999? -- the appearance of movie stars on the small screen makes TV watching more appealing.

ABC made the first move when it announced it will begin repurposing (that's industry talk for rerun) episodes of the new cable series, Monk. Starring Tony Shalhoub (Wings) as a brilliant but obsessive-compulsive private eye, the USA series premiered to favorable reviews in July. New episodes, which premiere on Friday, will be repurposed on ABC the following Tuesday at 8pm.

According to an Aug. 7 Hollywood Reporter article, Fox first repurposed episodes of Showtime's It's Garry Shandling's Show in 1986, and HBO's Dream On in 1995. However, those shows did not air the same week as the original airing, as will Monk. And though NBC will repurpose Court TV's Forensic Files later this month, "Monk is the first scripted series in recent memory to make the switch from cable to broadcast," according to the HR.

This announcement comes on the heels of ABC entering into a new development deal with HBO. "Under the deal, HBO Independent Productions (HIP) will develop and produce series programming for broadcast on ABC," according to an HBO press release. "While ABC will have a first look at all programming developed by HIP, HIP will be able to approach other networks for projects not ordered by ABC ... [while] ABC retains distribution rights and copyrights for all programming developed through this association." Past HIP projects include Everybody Loves Raymond, Martin, and Roc.

What does this all mean for viewers? Nothing and everything. HBO has become synonymous with quality television. Television is a writer's medium. Good actors will follow good writing -- if they're smart. So, as long as ABC has dispensed with the suits who saw fit to trash the network's stellar programs like Once and Again and The Job, TV viewing on the wobbly network can only improve. If not, there are plenty of other choices out there. All it takes is a flip of the dial.

When he left Austin airwaves nine months ago, it seemed like an old friend had moved away. But soon, he'll be back, and not just for a visit. Yes, the enormously likeable and gosh darn cuddly Fred Cantu returns to Austin airwaves Aug. 19 on CBS affiliate K-Eye. Not that he went very far. The longtime South Austinite did a little traveling and spent quality time with the family. But when an opportunity to anchor another early morning news show presented itself, how could he resist?

Cantu returns to K-Eye thanks to the affiliate's new news director, Tim Gardner. Gardner used to be at channel 7 when it was a CBS station, where he hired Cantu as a reporter.

"What we were doing back then in the early Nineties is what K-Eye is doing now -- straightforward news, no gimmicks," said Cantu, explaining his return to local TV news.

Cantu will anchor the early morning news program from 5am to 7am. Not an early riser? Not to worry, he'll also develop features for the 10pm broadcast.

The Criterion Collection, a festival of world-class cinema, continues through August on the Sundance Channel. All films air at 8pm. The films and their directors include: