'Little House' on the Backlot: A Conversation With Screenwriter Stephen Harrigan

A conversation with screenwriter Stephen Harrigan 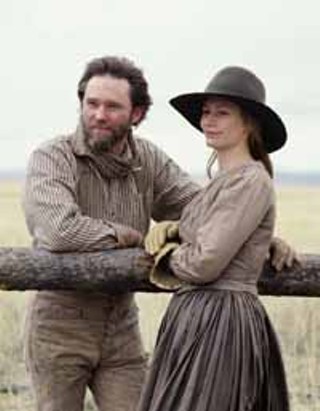 Richard Thomas (l) and Meredith Monroe in Beyond the Prairie

Austin Chronicle: How did Beyond the Prairie come about?

Stephen Harrigan: When my youngest daughter was about 7 or 8, I read her Little House on the Prairie. I'd never read anything by Laura Ingalls Wilder and was startled by the literary quality of it and the sense that it was a great American story that was not evident in the television series. There was an idealized version of growing up on the prairie in the 19th century, but there was also a more heartbreaking version, which is what her life was like.

AC: What was the challenge of writing a "biographical" film?

SH: To make a movie about a person's life, it must have a very tight focus. It has to be about something besides the course of a life. We decided it was about Laura's awakening to herself, as a writer and grown human being, taking her from her first stirrings of creative energy and womanhood to the point where she's ready to embark on a new life as a writer and a wife and mother.

AC: How did you distinguish your Laura from Laura of the wildly popular TV series?

SH: I wasn't a student of the show and made a point of not becoming one, because in my mind, the series was diametrically opposed to what I wanted to do, which was tell this gritty and heartbreaking story. We didn't have the rights to the LHOP book but what I could use was a condensed autobiography called Pioneer Girl that Laura had written and couldn't get published. It was a spare document detailing the events in her life. I went back to that and several biographies for the real events in the books.

In my mind, the goal was always to not remind people of the series, to do something different. The movies I embark upon are unsentimental, take-no-prisoner movies, but what I realized with Beyond the Prairie, there's a certain happy medium between the stark portrayal I set out to create and the emotional necessities of television. I felt like this movie landed right in-between. Where it ought to be.

AC: How much of Little House was Laura's daughter, Rose Wilder Lane?

SH: Rose Wilder Lane is one of the unacknowledged great masters of American literature and the LHOP books are very much a collaboration between mother and daughter. Laura had the experience but Rose had a uniquely powerful voice and the writing talent. Rose was a real writer, went to Vietnam as a reporter at age 78, traveled the world over, lived in Albania, and was an international correspondent but never quite found her voice until she settled in with her mother and wrote the LHOP books.

It's a seamless voice and belies the rocky, tortured relationship they had in real life. Laura was a hard case. She was a product of pioneer life. She was exposed to heartbreak and trauma and tragedy and has a no-nonsense, get-on-with-it personality but also a certain wistfulness. She's not the parent her father was, who comes across through her books as the most beloved father in American literature except for maybe Atticus Finch. In Rose, there was always a sense of wanting to get her approval and love, and finally she managed to get that when she collaborated with her mother on the books.