All I Really Need to Know I Learned Watching Movies

Required viewing for back to school 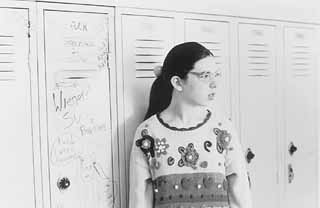 Welcome to the Dollhouse

Adam Sandler's 1998 film The Waterboy proved to be so much like this classic 1925 Harold Lloyd comedy that the Lloyd Trust sued Disney, citing some 60 "similarities" between the films. They needn't have bothered: Gangly, bespectacled Lloyd, as hayseed collegiate frosh Harold Lamb, is forever Sandler's better, and the film, the silent comedian's personal favorite, is as pure an example of comic genius as any you'll ever see. The footballing climax, a triumph of gangliness over gravity, rivals Keaton and Chaplin at their best, and still evokes giddy cheers to this day. -- Marc Savlov

You're new. I'm new. Let's put aside our differences and go at this thing together. Ah, if only things were so simple for undercover cop John Kimble (Arnold Schwarzenegger, who has a knack for making things more difficult than they are) and his new crop of kiddies. Instead, Kimble finds himself not only hunting for violent drug dealer Cullen Crisp, but also teaching kindergarten in one of the more bucolic -- but bubbling sinister -- regions of Oregon. His class, it must be said, is a nightmare -- at first -- led by the likes of Joseph (Miko Hughes, following up on his outstanding turn as Gage in Pet Sematary), who informs Kimble that "boys have a penis and girls have a vagina." A colorful and touching ode to innocence lost.

Supplemental texts: The Freshman (1990), Back to School, Dazed and Confused

That Cameron Crowe's screenwriting debut hit its mark between the coda of the sex-and-drug "revolutions" and the mean-spirited primness of the Reagan Youth era has as much to do with its status as a teen classic as the fact that it launched a thousand Spicolis. Wrapped around an improbably vast number of now-legendary one-liners is a serious teen comedy that heralds the Eighties but forgoes that decade's eventual tendency to excessive moralizing and glitz. Fast Times is probably as realistic about the middle-class high school experience as feel-good Hollywood entertainment can get, its sad sweetness only enhanced by the cavalcade of Vans, leg warmers, and the immortal Mr. Hand. -- Cindy Widner

Supplemental texts: Class, The Sure Thing, This Is My Life, Losin' It

Sweet, bizarre Saint Clara tells the story of Clara, a 13-year-old Russian immigrant who uses her clairvoyance to help her seventh-grade class ace their math exam, and that of the colorful characters touched by the girl's unique talent, like a pair of adolescent roughnecks, originally drawn to Clara for the role they hope she'll play in their plan to foment revolution, who soon find themselves head-over-heels for the dazzling diviner. Saint Clara swept the Israeli version of the Academy Awards when it debuted in 1996, an honor well deserved for the inventive creativity that marks the script. -- Cathy Vaughan

Supplemental texts: Flirting, Zero for Conduct, If, The 400 Blows

There is no one more preyed upon than a seventh-grade dork -- a point made painfully, hilariously obvious in Todd Solondz's 1995 film, Welcome to the Dollhouse. Heather Matarazzo plays Dawn Wiener, a frumpy, gawky 12-year-old with Coke-bottle lenses and a truly frightful fashion sense, trying wretchedly to survive the daily humiliation heaped upon her in the halls of Benjamin Franklin Junior High. Ostensibly a comedy, this movie will definitely make you laugh; if even a small part of you remembers the horror of adolescence, it will also make you glad, like Dawn, that junior high doesn't last forever.

New Granada is a suburban planned community in the middle of nowhere, a place that's attractive to homebuyers but deadly dull for their kids. In this most volatile of all teen rebellion movies, the kids' pastimes of petty vandalism and recreational drug use ultimately explode into the four-alarm mayhem of a school conflagration. Also incendiary here is the screen debut of 14-year-old Matt Dillon as "bad boy" Richie White. In the hands of able director Jonathan Kaplan, Over the Edge is one of the great films of the Seventies. The soundtrack rocks, too. -- Marjorie Baumgarten

The pupils at this Kowloon schoolhouse look clean-cut -- the girls in boatneck sailor dresses, the boys with skinny ties and vintage late-Eighties mullets -- but behind the walls lurks the sinister influence of Triad gangsters. When ingénue Fennie Yuen witnesses a student's murder and fingers the perp, the gang's maniacal "big brother" retaliates, shaking her down for money. But will he force her into the Life? Director Ringo Lam's gritty Hong Kong youth-gang melodrama is so tough you'd expect the mahjongg ladies to start brawling. -- Marrit Ingman

This fine boarding-school drama from 1931 (remade in 1958) is notorious for its matter-of-fact depiction of a teenage girl (played by Hertha Thiele) with a crush on her beautiful, caring teacher (Dorothea Wieck). While Fraulein von Bernberg kisses the girls goodnight and permits tomfoolery in the corridors, tough headmistress Frau Oberin squashes the youthful spirits of her charges and scrimps on food. Will her unforgiving rule lead to tragedy? A clarion call against the groundswell of authoritarianism in Weimar Germany, the film is as effective as a work of art. The acting is nuanced, and the expressionistic extremes of light and shadow are lovely to behold. -- M.I.

More akin to Airplane than Scream, this horror spoof is pure, enjoyable schlock. Toby, the prude protagonist, tries to convince classmates to abstain, but her salacious friends quickly become murder victims (the body count blinks on the screen with each fresh kill). The killer (aka the Breather) creeps around in squishy galoshes and green rubber gloves and wields an array of unlikely weapons: paper clips, blackboard erasers, three-ply trash bags, an eggplant, and horse-head bookends from shop class. As bone-thin, double-jointed Malvert the Janitor (listed in the credits only as "the Stick") warns: "Sex kills." -- Tommi Ferguson

"This is going down on your permanent record!" Those immortal words (from Vince Lombardi High's Principal Togar) are part of the daily existence of the rebellious, rascally, rock & rollin' Riff Randell (P.J. Soles). Riff can't be bothered with attending class or doing homework when the greatest band of all time is coming to town, and you know Togar's ban on the Ramones concert won't stop Riff from being front and center at their upcoming Rockatorium gig. Although this campy classic features some great off-the-wall ensemble acting, Rock 'n' Roll High School truly belongs to those pizza-eatin', three-chord-rockin' Ramones. Baby-faced Joey has to be the most unlikely sex symbol of all time, but it's hard not to relate to Riff's love for this sadly departed punk legend. Gabba Gabba Hey! -- Mark Fagan