Kind to Be Cruel 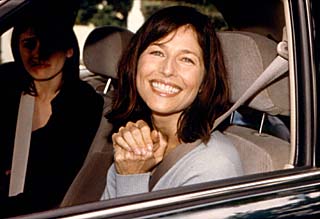 Catherine Keener has nothing but nice things to say: about her new movie, Lovely & Amazing (both adjectives crop up in our conversation), about its director, Nicole Holofcener ("so unbelievable"), about many of the directors she's worked for, from Steven Soderbergh ("a genius, and so fun") to Spike Jonze (he nets an "omigod" ... the rest is implied).

Fawning isn't all that rare in a Hollywood actor -- never burn a bridge when that bridge could provide your next paycheck -- but with Keener, the enthusiasm feels genuine. And genuinely surprising, considering her roles so often are alkaline-charged women who seemingly snack on babies for nourishment: as a ballsy, teeth-baring exec in Being John Malkovich (which earned her an Oscar nomination), a snippish cheating wife in Neil LaBute's Your Friends and Neighbors, and the sarcastic but wounded single girl in Holofcener's debut feature Walking and Talking. Of course, it's called acting, but still, I'm poised like a dog for some shred of that delicious bitchiness. No dice. Keener laughs frequently and loudly, makes small talk about Austin, and, when I tell her all my gay boyfriends love her, peals out, "I love my gay boyfriends, too!"

Everybody has nice things to say about her as well. Directors cast her repeatedly, often writing roles specifically for her (Soderbergh and Jonze have enlisted her talents twice, indie filmmaker Tom DiCillo four times). She brushes their dedication off with a laugh: "[I'm] really lucky, plus I grovel. I ply them with alcohol. They're people of integrity, so they have to keep their word."

The casting process for Soderbergh's latest, Full Frontal (which premieres regionally at the Paramount Theatre in August), was typically laid-back. "I saw him at a barbecue last year, and he said, 'what are you doing in November?' And I said 'nothing,' and he said 'you want a job?' I said yes. And that was it. It was in the paper and everything that I was doing it before I'd ever even read anything."

The press has had a toothsome time reporting Soderbergh's no-bullshit policy on the production (co-starring Julia Roberts, David Duchovny, and David Hyde Pierce), which involved a memo detailing what actors could expect from the shoot.

"The memo was hilarious," Keener reports. "It was on the cover of the script and it was, 'if you need to be alone, you're pretty much screwed,' 'if you need to be driven to the set, you will be laughed at.' That kind of stuff. ... We didn't know what the hell was going on most of the time. And then of course he turns in this masterpiece."

Lovely & Amazing is earning its fair share of praise, too, and its leading lady is receiving some of the best reviews of her already spangled career. Keener builds on the complex blend brought out in Holofcener's first film -- tough front, fragile interior -- as Michelle, a wife and mom whose artistic ambitions are fading as fast as the romance in her marriage. She's the eldest of three sisters, each reaching a certain crossroads in their lives as mom (Brenda Blethyn) is hospitalized for cosmetic surgery. Middle sister Elizabeth, played by British actress Emily Mortimer, is plagued by the body image obsession that comes hand in hand with the acting industry, and adopted preteen sister Annie (an astonishing Raven Goodwin) struggles with self-identification as an African-American and a chubby girl in a white, impossibly thin world. It's a film that eschews the Bridget Jones-flipness that usually accompanies the investigation of female insecurity.

"The levels are mind-blowing," Keener says. "Raven gets her hair straightened by her big sister, her mother chastises her for saying she wants to tear her skin off, yet she's going to get liposuction."

Certainly not your standard-issue "women's issues" approach, and Keener is especially reluctant to lump the film in with other femme-centric films. ("If you held a gun to somebody's head they'd say it was a chick flick, but that's not how I view it.") Part of the joy for her in making Lovely & Amazing was the ability to work again with writer/director Holofcener, a longtime friend, on a project that addressed female identity without turning Ya-Ya saccharine, a rarity in Hollywood.

Keener's voice drops a little, like she's spilling a dirty secret: "They're made, but they're not usually -- I mean, I hate to say this, this is terrible, because I consider myself a feminist and all that -- but I just feel like [women's pictures] are underrepresented in numbers, but also in quality. ... They become tepid and watered down. I don't often come across movies really smart enough to reflect the [women] I know."

Dirty secret laundered, her voice returns to its previous pitch and, soon enough, she's back to belly laughs and nothing but nice things to say.