Not Another Law Drama 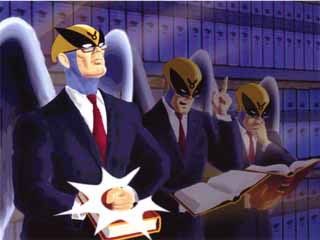 I would probably watch more legal series if I knew the clients would be Jabberjaw, Boo-Boo Bear, Scooby-Doo, and Shaggy. Thank goodness I get my wish when the Cartoon Network launches new episodes of Harvey Birdman, Attorney at Law. Originally included in Adult Swim, the twice-weekly block of adult-oriented cartoons that premiered last year, Harvey Birdman quickly gained a special following.

Who is Harvey Birdman? He's an "aging superhero hired as the token cartoon lawyer at a top firm." Although he's dying for some respect, he's stuck with all the firm's cartoon litigation -- like that nasty custody battle between Dr. Benton Quest and Race Bannon over custody of Jonny and Hadji (Jonny Quest).

Granted, it probably helps to be familiar with old, second-rate cartoons like Jonny Quest and Scooby-Doo, but even if you're not, you can't help but be amused. The very adult humor adds to the pleasure. Here's what's on Harvey Birdman's docket in July:

Repeats of the hilarious "Bannon Custody Trial" (described above) and "Very Personal Injury," in which Harvey Birdman comes to the rescue when obscure superhero Apache Chief spills hot coffee from a well-known java chain on his lap, diminishing his power to "enlarge."

"Shaggy Busted." Fred, Velma, and Daphne call on Harvey Birdman when Scooby and Shaggy are pulled over in the Mystery Machine, weaving down a spooky country road, laughing like doofs and charged with possession. Premieres July 7.

"The Dabba Don." Fred Flintstone: Good husband, good father, and honest working man -- or is he? When Fred seeks Harvey Birdman's advice in expanding his construction business, Harvey is happy to oblige, until he suspects that Fred has ties to the Mob.

No, not the onetime CBS series (which I liked, but no one else did), but the return of Life 360. Entering its second season, this little gem of a show features meditations on a variety of simple, yet thought-provoking subjects. After the hour of examining the subject in 360 degrees, don't be surprised if you feel just a little more enlightened. Not the typical blow 'em up, gross 'em out summer fare, but that's what makes it a welcome relief from the drivel on summer TV.

Life 360 airs Thursdays, 10pm, on PBS. There's no episode on the Fourth of July, but the show resumes its regular schedule July 11 with the theme "Redemption." Segments include a profile of airline pilot Lyle Prouse, convicted for flying drunk in 1990; an animated segment on redemption in the wrestling ring; and comic Jake Johannsen's words on "owning up." On July 18 the theme is "Neighbors"; on July 25, "Family Secrets."

Since I'm singing the praises of PBS, here's a heads up not to miss Hybrid, the second film in the POV series, July 9 at 9pm. It's my favorite of the July films in the series. A special edition of Now, titled "Islam vs. Islam" takes a look at the complex history and religious beliefs of nations regarded as Islam. Bill Moyers hosts the show, which airs Fridays at 9pm. "Islam vs. Islam" airs on July 12.

Actually, make that Joss Whedon the Dissed, writer and creator of Buffy the Vampire Slayer. The Emmy Awards fuddy-duddies have never been fond of the Slayer or its creator, consistently overlooking it for the big awards come nomination time. This year, the dissing was by omission, according to a TV Guide Online article. In recently mailed ballots, the critically acclaimed episode "Once More with Feeling" was accidentally omitted from the ballot. Although an addendum ballot was sent to cover the oversight, speculation is that addendum ballots are regarded as junk mail. Oh well. It's not like Whedon and crew aren't used to it.
More TV Eye columns