How to Get the Government to Pay Attention, the Rotoscope Way 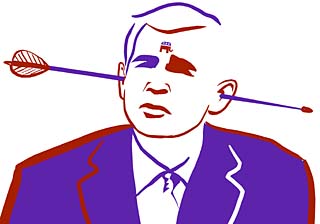 "State of the Union"

Rounding the corner of Jason Archer's South Austin home, the first thing I see is Archer and friend/accomplice/co-animator Paul Beck huddled over a nasty-looking bomb. They're polishing this piece of artistic ordnance to a high gloss in preparation for their upcoming show at the new art space in town, Science 102, marking the venue's grand opening. No matter that the weaponry they're doting over like a 3-year-old with the terminal cutes isn't even a dud -- it's a fiberglass fake, actually -- these two Waking Life animators are clearly out to stir things up. Isn't that a dicey idea, considering the current political climate, and one that might very well draw the ire of either Big Brother or his ever-multiplying minions?

"I'm what I guess you'd call a visual artist," says Beck. "I mainly paint houses, and before Bob [Sabiston] contacted me, I'd never worked with computers before."

You wouldn't know it, though, to look at the pair's animated showpieces, the first of which is a Sabistonized reworking of the president's recent State of the Union Address, which, with its snarky tone and reconstituted dialogue ("America needs more illegal drugs," the W opines, while an animated cruise missile performs a fly-by in the vicinity of his cranium), owes as much to Bad Bill Burroughs' cut-up technique and the far-left tomfoolery of Noam Chomsky on acid as it does to any conventional animation technique. Satire or parody (the argument's still not settled), this is bound to get some hackles up.

"It's all for fun and whatnot," says Beck, "but one thing we want to do with the show is to raise money so that we can do more of these types of animations."

(The irony of poking fun at such a master capitalist as George W. -- in order to garner cash flow to continue to poke fun at George W. -- isn't lost on the pair.)

"And, of course, the other thing is that this is the ultimate American thing to do: to satire those in power," finishes Beck.

But wait, there's more: Through a circuitous route of friend-of-a-friendism far too lengthy to go into here, Archer and Beck have done an animated video for former Talking Head David Byrne's "The Great Intoxication." Local heroes Tosca are involved in the project as well, but all anyone really needs to know about the text-heavy vid -- which features snippets of Byrne's writing layered atop an ever-shifting, rotoscopey background -- is that Byrne ended up watching it first in a cramped security booth, on a four-inch security-camera monitor, in Japan. Again, the backstory's too much to go into, but let's just say finding a VHS tape player while on tour outside of the U.S. is far more problematic than even I had imagined.

Once Byrne saw the demo vid, however, a hasty e-mail was dispatched (subject line: "Wow!"), and Archer and Beck were officially Byrne's newest video directors.

Sitting in Archer's verdantly Austiny back yard, however, with roving gangs of mosquitoes making kamikaze runs on every inch of my exposed flesh, it's hard to imagine these two artists getting under anybody's skin all that much. With "State of Union" primed to do just that, though, and the Byrne video waiting in the wings, it's obvious that something terribly clever is going on here, wayward bombsmithing techniques or no.

Jason Archer and Paul Beck will screen "State of the Union" and more on Thursday, July 12, at dusk at the grand opening of Science 102 (1021 E. Seventh #102). You can also visit www.davidbyrne.com for a snippet from the video "The Great Intoxication."