Out With the Bold 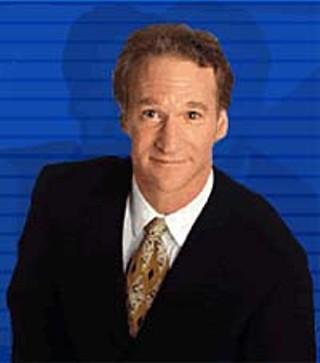 Bill Maher gets the boot.

After nine years (four on Comedy Central, five on ABC), Bill Maher's Politically Incorrect is finally being put down, with the series finale airing Friday, June 28. Although Maher quips, "I'm not leaving the world, I'm just leaving ABC," one has to wonder what kind of future is in store for the comic pundit. Maher outraged viewers, sponsors, and his host network with his comments following Sept. 11; the rumors of the show's impending demise that have circulated for months were finally confirmed when the network dropped the ax last month.

I've never been a Maher fan. What others called politically edgy, I saw as merely contrarian. Yet, I can't help but be a little sad at the show's end. Not because I'll miss Maher, but because I fear what the elimination of this show and the events leading up to it mean. The fact that Maher was so roundly chastised for offering an idea on a show supposedly set up as a free-range program of ideas is not only baffling, but also a troubling indication of how narrowly focused broadcast media are.

For those who've forgotten, this is the comment following the Sept. 11 attacks that sealed Maher's fate: "We have been the cowards, lobbing cruise missiles from 2,000 miles away. That's cowardly. Staying in the airplane when it hits the building, say what you want about it, it's not cowardly."

Critics were harsh and swift with their judgement of Maher, saying he had no business offering criticism in a time of crisis. Strange how those who decry the erosion or lack of civil liberties in other nations are the first willing to snuff the voices of those who dare to practice these freedoms here in our nation.

Unfortunately, Bill Maher is hardly a poster child for free speech rights. Fueled by the need to provoke rather than inspire, Maher awkwardly backpedaled, made strained apologies, and finally moped around like muzzled dog until the final blow came last month. A more ambitious person would have used the opportunity to fully engage the gathered torchbearers in a larger discussion of the U.S., its place in the world, and how this nation is seen from other perspectives. But even as I type that, I see how naive that is. With precious few exceptions (Bill Moyers' Now on PBS comes to mind), absent from the airwaves is serious, balanced news coverage that dares to ask: Is our way the only way?

The final episode of Politically Incorrect airs June 28, 11:35pm, on ABC. Jimmy Kimmel (The Man Show) takes over the time slot with a new show in January.

Former Clinton advisor George Stephanopoulos will take over as sole anchor of ABC's Sunday morning public affairs show This Week. He replaces Sam Donaldson and Cokie Roberts and will go up against longtime Sunday morning news hosts Tim Russert on NBC's Meet the Press and Bob Schieffer on CBS's Face the Nation. Stephanopoulos makes his debut in September.

Not reviewed at press time: Connnie Chung Tonight. Former ABC correspondent and onetime co-anchor to Dan Rather, Connie Chung just completed her first week in her new prime-time cable news show on CNN. How she fares against Bill O'Reilly on Fox (The O'Reilly Factor) and the upcoming MSNBC show with Phil Donahue (set for mid-July) is the stuff of bet-makers. Connie Chung Tonight airs weeknights, 7pm, on CNN.

Bring out the Good Stuff

Also on the Sundance Channel comes the summer series Classic World Cinema from the Criterion Collection. Now in its second season, the series features influential or groundbreaking films from a cross-section of filmmakers and genres (and are part of the vast catalog of DVD outlet Criterion). The films air Saturday and Sundays at 8pm through August. The July films include:

If only I knew how to read a calendar. The Emmy nominations will be announced July 18, not June 18, as previously reported. The ceremony still airs live on Sept. 22.
More TV Eye columns