A revolutionary RPG freezes out the competition 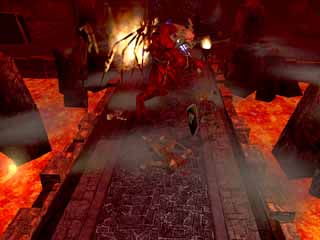 If you recall an arctic chill running down the spine of your back on June 19, forget any notion of writing it off as an El Niño hiccup: It had to have been the at-long-last release of Bioware's PC role-playing game Neverwinter Nights. Nearly five years in the making, this behemoth RPG is the first of its breed to correctly utilize D&D third-edition rules, transforming the game into a living, breathing incarnation of those late-night pen & paper dungeons you adventured as a kid. But NWN promises more than simple hack-and-slash quests through mythical lands laden with fire-breathing dragons. It also sports a groundbreaking carnival attraction known as the Aurora Toolset -- a revolutionary piece of software that enables players to transmute into virtual dungeon masters, allowing you to conjure your own dark caves filled with traps, trolls, and treasure galore. And for games of this ilk, booty is what it's all about. For players. For dungeon masters. And especially for Bioware. Already bunkered into the No. 1 sales slot on Amazon.com's coveted PC-ranking ladder, NWN continues to rake both the accolades and the gold (even at a hefty price tag of $60 a throw, copies of NWN continue to fly off the shelf). Voted the best role-playing game at E3 2002 (the game industry equivalent of the Academy Awards), NWN continues to out-roll the competition at every toss. But how long will it maintain this post-release glow? With some players already complaining about a muddled user interface and middling graphics, it's impossible to predict if NWN will be all things to all gamers. (Then again, two autographed copies of NWN just went for $10,000 during a recent eBay charity auction.) Despite the uneven press, a global NWN universe is developing at a feverish pace, with fan sites, guilds, and listservs sprouting up like dandelions in July. Texans who want to sound off and monitor can subscribe by e-mailing texasneverwinter-subscribe@yahoogroups.com. As for secondary Macintosh gamers, who normally must wait eons for PC titles to journey into their realm, Bioware recently announced that Macsoft will conjure up a compatible version to the anti-Bill Gates platform to ship in the fall of 2002.